Mar 19
POSTED BY Board of Police Commissioners News Releases

March 2019 | Detroit, Michigan – Women’s History Month became especially historic in Detroit this year, thanks to the new composition of the Detroit Board of Police Commissioners.

For the first time, a combination of elected and appointed female Police Commissioners totaled six, making women the majority on the 11-member oversight board.

“As the civilian oversight board for the Detroit Police Department, one of our goals for the department’s workforce, as well as the Board itself, is to reflect the demographics of the City of Detroit. This is why the current number of women serving on the Board is historic and truly special,” said Lisa Carter, the immediate past chair who is in her second term as police commissioner for District 6.

“Still, it is important to remember that each police commissioner comes to the Board with a strong dedication for the important work of ensuring our city has the most professional, responsive, effective, and diverse police department,” Carter added. “We all work together towards that end.”

The BOPC was destined to become majority female last fall when Mayor Mike Duggan named women to fill two vacancies. In addition to Carter, the female police commissioners are: 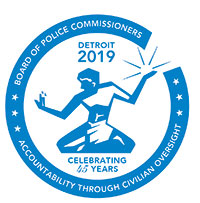 Created by the 1974 City Charter, the Detroit Board of Police Commissioners has supervisory authority and oversight over the Police Department. Under the 2012 Charter, the Board is comprised of 11 civilian members; Detroiters elect seven members by district and the mayor appoints and the city council confirms four at-large members. All board members serve as unpaid volunteers.

The Detroit Board of Police Commissioners meets weekly on Thursday at 3 p.m. at Detroit Public Safety Headquarters, 1301 Third Street, except for the second Thursday of the month when it holds community meetings at 6:30 p.m. at various locations.

With advance notice of seven calendar days, the City of Detroit will provide interpreter services at public meetings, including language translation and reasonable ADA accommodations. Please contact the Civil Rights, Inclusion and Opportunity Department at (313) 224-4950, through the TTY number 711, or email at [email protected] to schedule these services.

For the Board meeting schedule, video, minutes and other information, visit the website at detroitmi.gov/bopc.