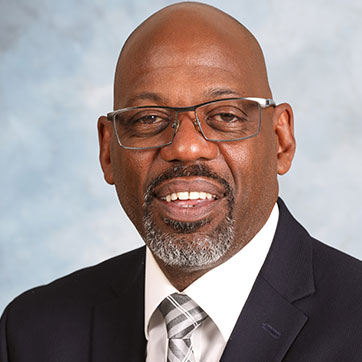 A native Detroiter, Bryan Ferguson grew up on the city’s west side and graduated from Central High School. He served in the U.S. Army and received an honorable discharge at the rank of Sergeant. He later joined the United States Postal Service and worked as an automotive technician for 25 years before retiring.

He coaches and mentors youth as a Little League Coach, and led a recent Rosedale Park team to a third-place finish in state competition.

He is passionate about community service. In 2010, he became President of the Schoolcraft Improvement Association and helped grow the organization from 12 to over 370 members during his 11-year tenure. His advocacy with state legislators in a tight budget year secured $50,000 through the State of Michigan for a baseball field and walking track at Dossin Elementary School.

In 2015, three organizations – Detroit Local Initiatives Support Corporation, Michigan Community Resources, and Community Development Advocates of Detroit – selected him as Community Leader of the Year. He also serves on the Rippling Hope Organization Board of Directors. He has been named Volunteer-of-the-Month in Rosedale Park and has two Spirit of Detroit Awards among numerous honors and recognitions for his extensive community service, outreach, and contribution to his neighborhood and the surrounding area.

A 2014 graduate of the Detroit Citizens Police Academy, Police Commissioner Ferguson won election in 2021 and represents District 1. The district includes the 8th Precinct and parts of the 2nd and 6th Precincts.

In January 2022, Board members elected Police Commissioner Ferguson as Vice Chair to fill the leadership position left vacant by the loss of Detroit 300 leader Martin Jones.

Vice Chair Ferguson is a proud home improvement guru, avid bowler, car and bike builder, and former stand-up comedian. He is married and has one daughter.