DETROIT – The U.S. Department of Housing & Urban Development (HUD) has selected Detroit as a winner of its highly competitive and coveted Choice Neighborhoods grant program, which will enable the City to bring more than 500 new units of affordable housing to the rapidly-developing Corktown neighborhood, Mayor Mike Duggan announced today. Detroit, which is among just five cities nationally to be selected, will receive a $30-million HUD grant, the largest amount offered under the Choice program.

The $30-million HUD grant is supported by $1.01 billion in leverage commitments from grant partners, including Ford’s new $740-million mobility campus and other economic development initiatives in Greater Corktown.

The historic Detroit neighborhood, which is seeing escalating rents as a result of new development, is now in line to see more than $200 million invested in 840 new units of housing completed over the next six years, at least 60 percent (504 units) of which will be set aside as deeply affordable housing units to ensure that Detroiters of all income levels can afford to live there:

“This is the city we are trying to build, where longtime Detroiters know they won’t be pushed out by development and where residents of all income levels can live side by side in quality housing in any neighborhood in the city,” said Mayor Duggan. “Our Housing and Planning teams put together a fantastic plan, and we are grateful to Secretary Marcia Fudge and the Biden administration for their confidence in the good work we are doing to prevent gentrification and displacement.”

The Mayor also thanked state housing officials for their support. “MSHDA has been a great partner to Detroit and we are deeply appreciative to Director Gary Heidl and his team for their support during this process.”

The planning area for this initiative is bounded by Martin Luther King Jr. Boulevard to the north, Fort Street to the south, the Fisher Freeway to the west and Lodge Freeway to the east – encompassing both historic Corktown and North Corktown. In addition to new housing, the grant will help the City leverage tens of millions of dollars in infrastructure improvements, better public spaces, more amenities and a community hub with early childhood education and health services for residents.

The plan is focused on three key areas:

Left field of former site of Tiger Stadium: The first phase of development on this 3.7-acre site along the Fisher Service Drive and Cochrane Street will see a new, $29-million 120-unit development being erected that will feature 48 units of affordable housing ranging from 30 to 80 percent area median income (AMI). The project, developed by ACD, was selected last year for Low Income Housing Tax Credit (LIHTC) funding. Work is to begin this summer.

Clement Kern Gardens: This 7-acre site currently features 87 townhome-style units of affordable housing built in 1985. When it was built, the site was isolated, with berms and a fence around it, and streets were cut off. Under the plan, the structures would be razed and rebuilt in phases beginning no sooner than 2023. All current residents would have the option to stay in the rebuilt Clement Kern Gardens or be given priority to move into another Corktown property. Most important, existing residents, no matter their income, will see their current rents continued to be based on their income, and their housing needs and status will be prioritized throughout the project. The site also would see the street grid restored to help reconnect the community with the neighborhood, and mixed-income housing would be added to create a more integrated community. Clement Kern is owned by American Community Developers (ACD).

North Corktown: There are 143 vacant lots in this area controlled by the City spread across 14.6 acres that will see new infill housing built on the site. The framework also calls for a new neighborhood service hub and outdoor recreation area to be built upon the former site of the Owen School, replacing a longtime concern in the neighborhood.

The City’s plan draws upon the Greater Corktown Framework, which was developed following an 18-month effort by the City Planning & Development Department (PDD) and Housing & Revitalization Department (HRD). Local leaders, residents, nonprofits and private developers came together to create Detroit’s bid to revitalize areas of the neighborhood and address challenges.

The City’s plan calls for replacing distressed publicly assisted housing; improving outcomes of households regarding education, employment and health; better integrating affordable and market rate housing to ensure a welcoming and diverse community for all; and reinvesting in distressed areas to offer amenities and assets, such as improved safety and early childhood education. Neighborhood projects will include a re-designed Roosevelt Park, a new community hub in North Corktown, improvements to key streets to improve safety and connectivity, and integrated green infrastructure throughout the neighborhood. Residents of Clement Kern Gardens will be supported with integrated case management and supportive services to support improved outcomes around health, economic self-sufficiency, early childhood learning and K-12 education.

The City engaged the community around the framework starting in March 2019, gaining input and hearing priorities of those already in the neighborhood, ensuring that those currently living in Corktown directed their neighborhood’s future. Residents made it clear their top issues are housing affordability and infill housing, as well as increased green space and amenities.

“A project of this size can bring an incredible amount of positive change to a neighborhood,” said Julie Schneider, acting director of the Housing & Revitalization Department, “but that change does not have to come at the cost of residents who have called this neighborhood home. We, as a city, have an obligation to protect those residents.”

The Corktown plan represents the first time Detroit has been selected to receive a Choice grant.

“This has been the most comprehensive and ambitious planning project Detroit has undertaken in a generation,” said Katy Trudeau, acting director of the City’s Planning & Development Department. “The fact that our plan was chosen speaks to the incredible team of planners, housing experts and dedicated City staff that we have working on designing a Detroit that brings the community into the planning process and helps create a city where all are welcome and all can benefit from the city’s turnaround.”

“The revitalization under way in our city is incredible, but we need to ensure that Detroiters who have stayed aren’t squeezed out of their neighborhoods,” said Donald Rencher, group executive for Housing, Planning and Development. “With all the economic development happening in Corktown, it is critical that there is affordable housing developed alongside it. Given the tremendous investment and trends that we are seeing, we are at an important time to ensure Corktown remains a place where Detroiters of all walks of life are welcome.”

In addition to housing and jobs, the framework’s other key focus is streetscape improvements and greenspace. Among the planned improvements are redesigned intersections at 14th and Michigan Avenue and overhaul of Roosevelt Park in front of Michigan Central Station.

In spring 2019, the team of Boston-based The Community Builders Inc. (TCB) and Hamilton Anderson Associates of Detroit and Detroit-based American Community Developers (ACD) was selected by the City following a request for qualifications (RFQ) process. TCB, which manages or owns 11,000 units of affordable housing nationally, already has experience implementing a Choice Neighborhood grant, in Cincinnati. ACD manages or owns 12,000 units, including Clement Kern Gardens, and has recently broken ground on Brush Watson, which will bring 310 units to Brush Park, more than half of which will be designated affordable housing. For the framework, the City partnered with global design firm Perkins & Will.

For more information on the Greater Corktown planning process and housing plan, please go to www.detroitmi.gov/greatercorktown. 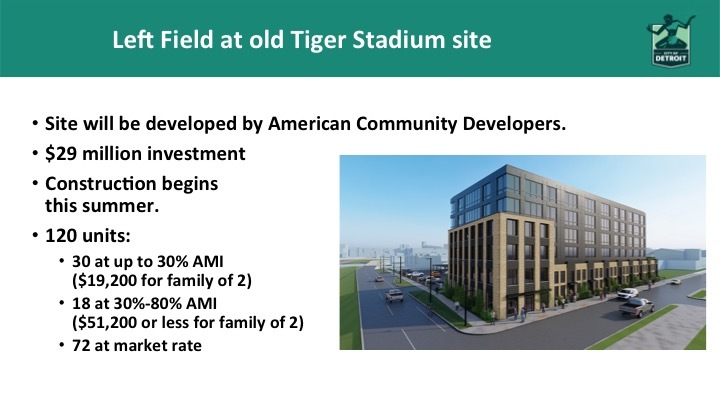 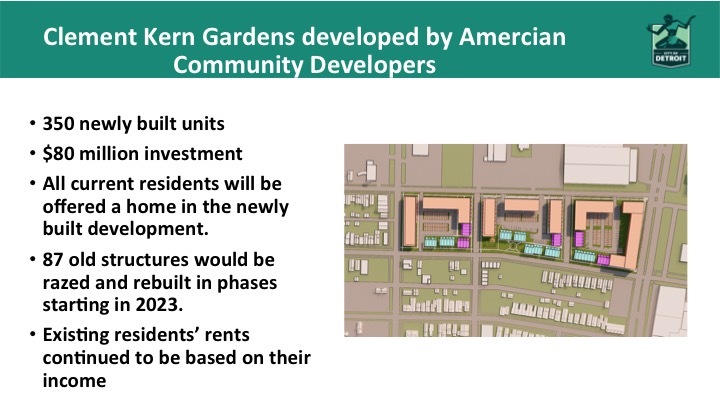