May 17
POSTED BY Joe Louis Greenway

The City of Detroit took the first major step today to create a world-class, 27.5-mile-long loop of publicly accessible space that will connect Detroiters and their neighborhoods, opening new opportunities for recreation and economic activity as the city recovers from the impacts of the pandemic.

Mayor Duggan was joined today by members of Joe Louis’ family, local, state, and federal elected officials, and members of the community as work began on the first phase of the greenway, which will reactivate a nearly three-mile stretch of abandoned railroad easement in the Midwest neighborhood. When completed later this year, it will be a new place for residents to walk, run or ride a bike safely as the greenway expands to new areas.

When completed in the next 10 years, the Joe Louis Greenway, named after the legendary Detroit boxing legend, will transform the nature of recreational access in Detroit for generations to come, according to Mayor Mike Duggan.

“The Joe Louis Greenway is about two things: Honoring one of our city’s greatest and most loved citizens and creating opportunity for Detroiters,” said Mayor Duggan. “Not too long from now, residents living right here near Joy Road and Greenlawn will have a safe and beautiful recreational trail that will connect them to our beautiful riverfront and to other great neighborhoods and commercial corridors across our city.”

"Putting this new plan in motion puts Joe Louis’s fighting spirit back on the map of Detroit,” said Janette Sadik-Khan, principal with Bloomberg Associates, who works with mayors on transformative transportation projects, including Mayor Duggan. “The road to a stronger, more equitable city starts by reconnecting people, local businesses, schools, and jobs with each other—and with a safe and active new way to get there.”

“My father believed that the working man was the hero—and he loved Detroit,” said Joe Louis Barrow II.

“The level of pride for African Americans in the accomplishments of our dad, Joe Louis, is immeasurable. We realize God's plan for this grandson of slaves was not just to become the greatest heavyweight champion of all times, but to change the hearts of Americans of all races. Due to the steadfast commitment of Mayor Mike Duggan and the Detroit City Council, the Joe Louis Greenway will stand as a monument to the legacy of the iconic life of a true American Hero, Joe Louis, we are eternally grateful.” said The Joe Louis Family.

The beginning of the $211.8 million project is the realization of a decades-long dream to bring active open space within reach of more Detroit residents.  It is also the culmination of a years-long community planning process and dozens of meetings engaging and bringing communities to the table. An estimated 46,000 Detroiters do not live within a 10-minute walk of a park, and a quarter of all residents do not have reliable access to a vehicle. The Joe Louis Greenway will bring recreational space accessible within a ten-minute walk of 10 percent of all city residents, presenting a once-in-a-generation opportunity to empower and unify neighborhoods.

The first phase will transform 2.73 miles of a former Conrail railway line from Warren Avenue to Fullerton Avenue into a path for walkers and runners or for people riding bikes, and with safe street crossings and connections to surrounding neighborhoods. Phase one will be paid for through $22M in bond funds, 2.5M from the Ralph C. Wilson, Jr. Foundation for design and construction plans, and 4.5M from MDOT and MDNR for the Conrail acquisition. A strategy is underway to govern and manage continuing phases of the greenway, and to raise funding from philanthropic organizations, donors, and from regional, state and federal sources, with details planned to be announced later this summer.

Phase One will include purchasing an existing scrap yard immediately north of Joy and converting it into a new green space for the trail.

“One of the most powerful aspects of the Joe Louis Greenway is how it will take existing vacant and blighted land and turn them into areas of beauty and recreation,” said Group Executive for Services and Infrastructure, Brad Dick.

“Throughout this process, we have been very satisfied with the community engagement, said Sheri Burton, president, Midwest Civic Council of Block Clubs. “We are excited to continue with the advisory council and ensure sustained community support for this project.”

When completed, the Joe Louis Greenway will connect with more than six miles of existing greenway along the Riverfront and along the Dequindre Cut. An additional 4.6 miles of connecting greenway are under development by a partnership of municipal and private groups, including the Southwest Greenway by the Detroit Riverfront Conservancy. The goal is to complete the 27.5-mile loop by the end of 2030. The Community Foundation for South East Michigan has agreed to hold an endowment for the future maintenance and management of the Greenway, opening the door new fundraising efforts.

Unlike Greenway and rails-to-trails projects elsewhere in the nation, about 45 percent of the land for the Joe Louis Greenway is owned by the City of Detroit, decreasing the costs and time needed to acquire the land. The ownership also increases the voice that residents and their representatives have in the design of the project, helping it reflect local needs.

Greenway and rails-to-trails projects in other cities have created far-reaching economic benefits, increasing foot traffic in neighborhoods and sales in local businesses, and encouraging livability and investment in adjacent areas. The City is committed to ensuring that the resulting development around the Greenway promotes equity, prevents displacement, and creates economic opportunity for Detroit communities.

The Joe Louis Greenway is following city processes to hire Detroit-based contractors and contractors that hire a majority of Detroit residents. Moving forward the City has been working closely with its partners at the Detroit Economic Growth Corporation and Detroit Employment Solutions Corporation to exceed those requirements. 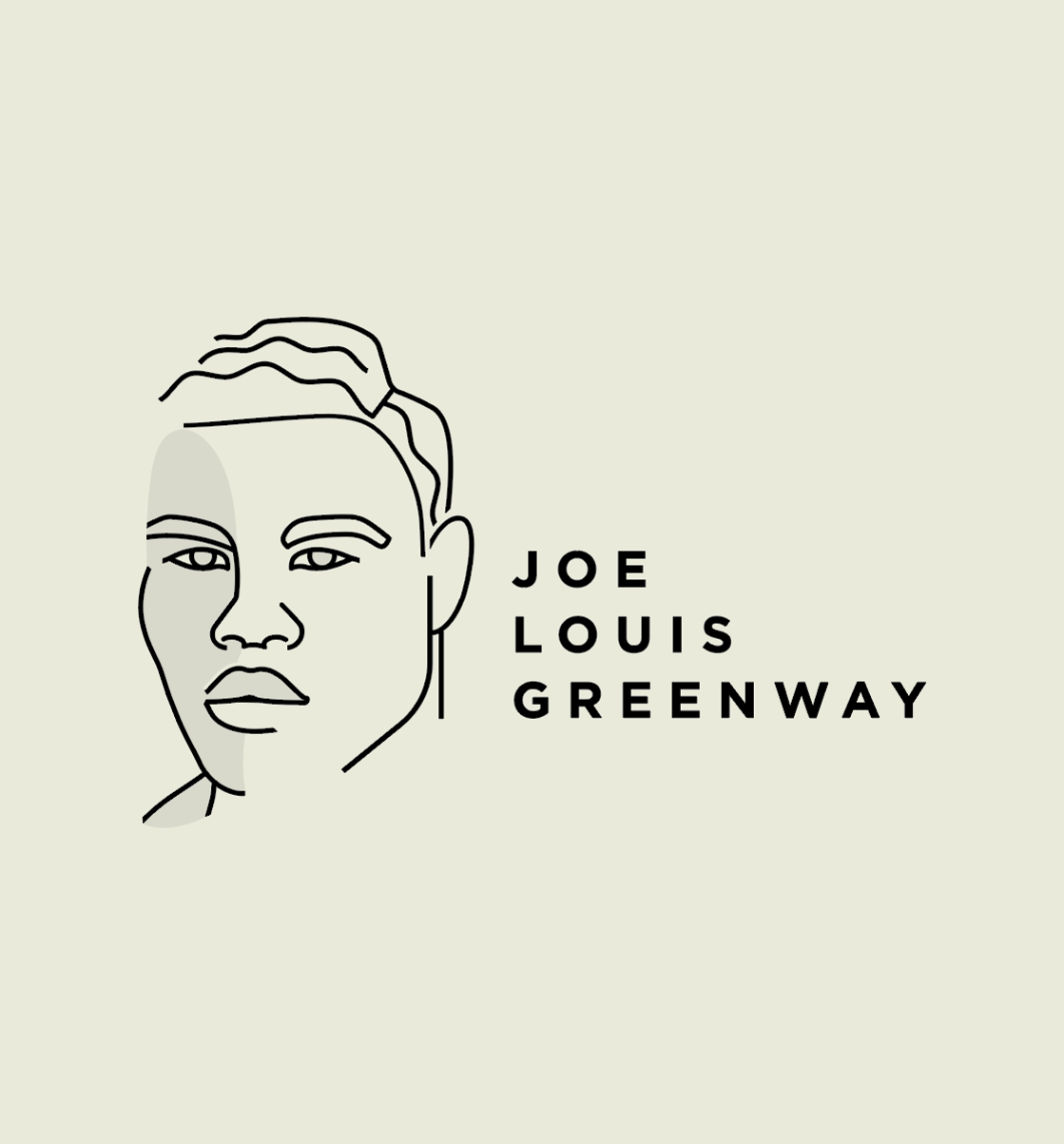 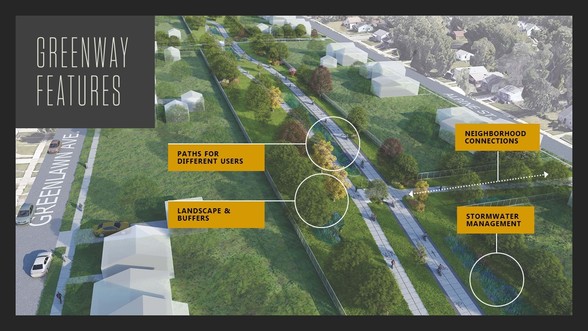 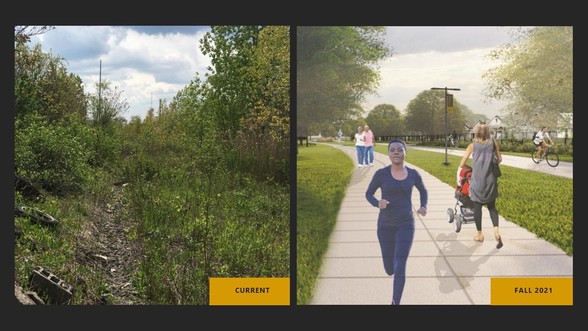 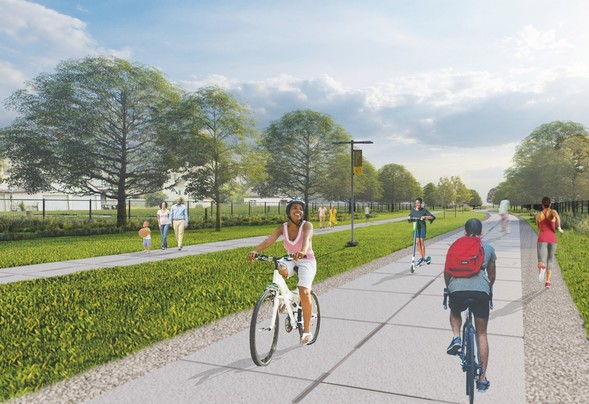