The Joe Louis Greenway is a recreational pathway that will unify Detroit’s neighborhoods, people and parks. Through this greenway, we strive to honor Joe Louis by providing equitable spaces through arts, programming, and economic opportunities for all.

The 27.5-mile greenway  will connect parks and neighborhoods across the city, allowing residents to travel safely from McNichols to the riverfront—all without a car—through a combination of new trails, on-street protected bike lanes and links to existing trails like the Dequindre Cut and the RiverWalk. The greenway includes the cities of Dearborn, Hamtramck, and Highland Park, linking them to larger trail systems that crisscross the entire state as well as pass-through five council districts.

For more information, you can read the Framework Plan. 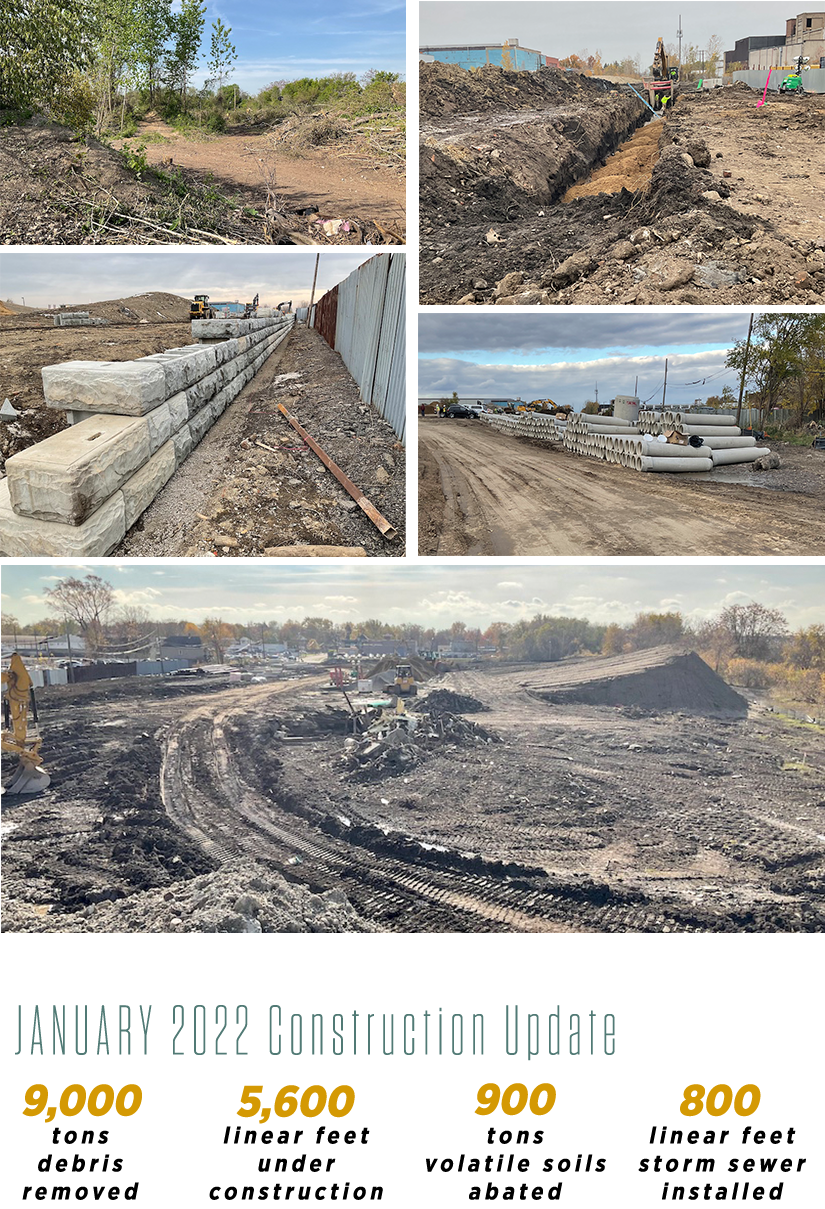 In the past month, the contractor has worked around weather, holidays and COVID to continue work in advance of mass earthwork operations planned for the spring. Activities included:

In the coming months, residents and local businesses can expect to see

The contractor is working with the City to keep residents and local businesses aware of construction progress and planned activities. 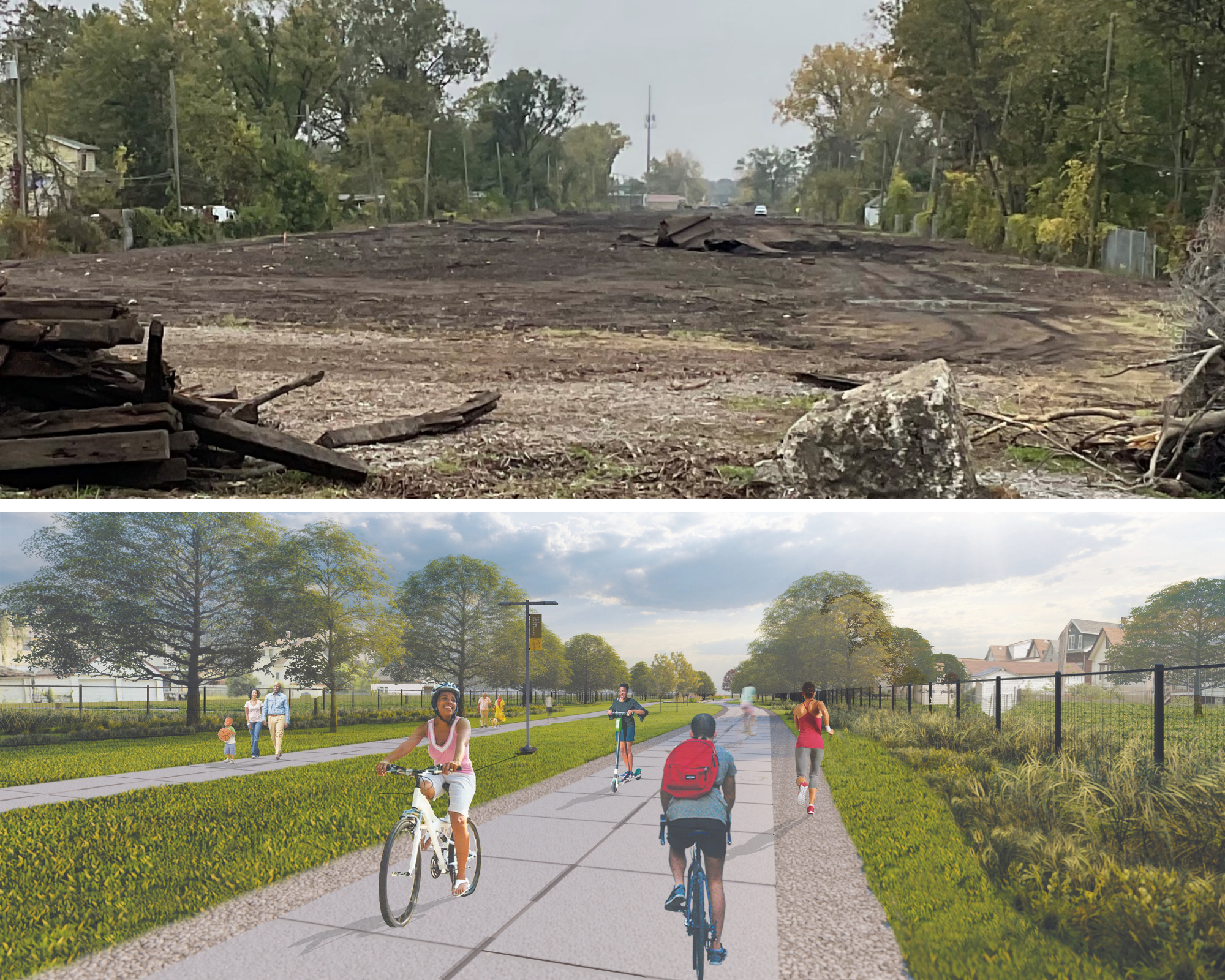 Phase 1 will include separate paths for slow and fast users (such as walkers and cyclists) and will provide safe street crossings and neighborhood connections.  Not only will this phase include walking and bike paths, it will also include a new park at Warren Avenue with a playground, fitness equipment, and a pavilion. 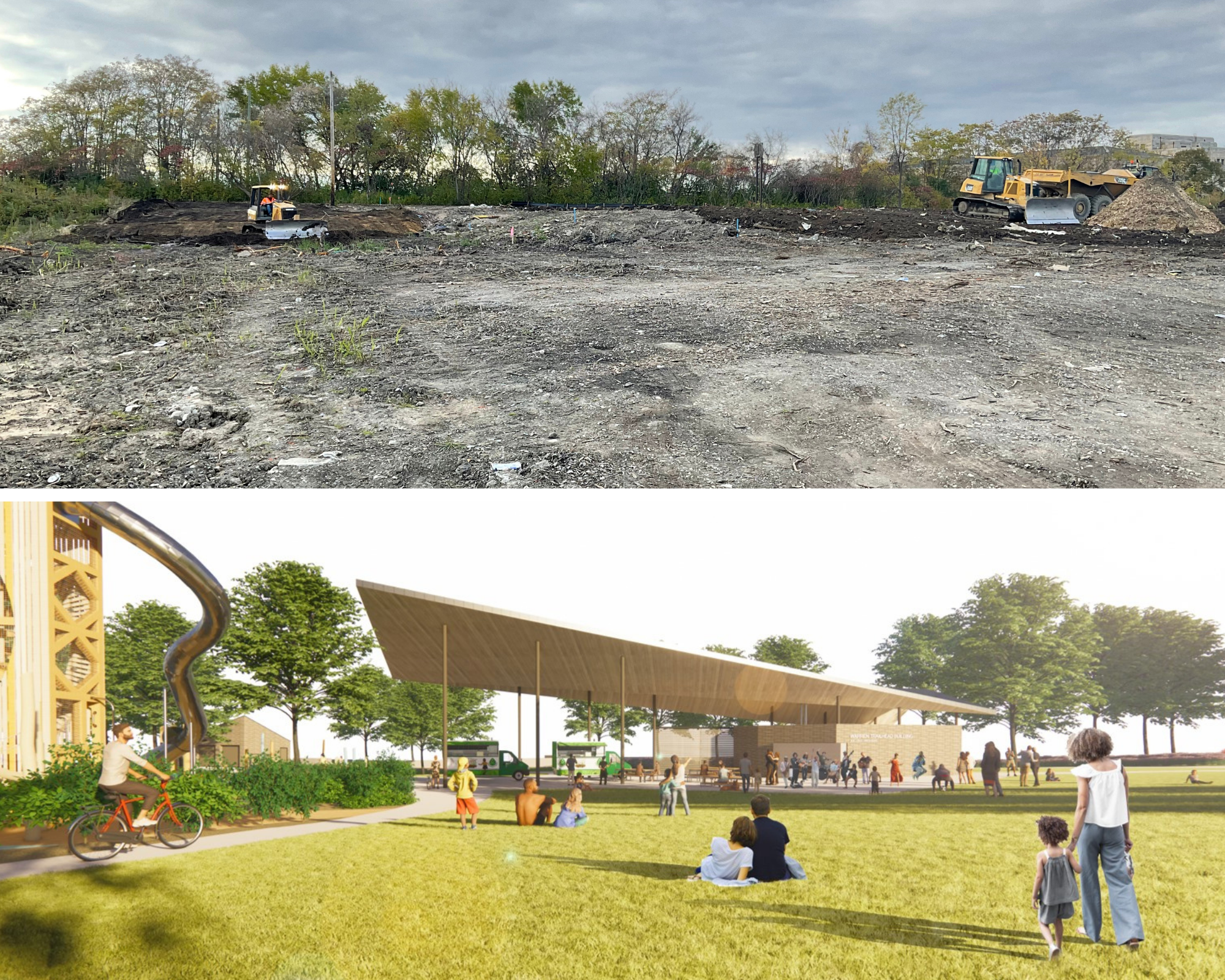 END_OF_DOCUMENT_TOKEN_TO_BE_REPLACED

The City of Detroit was awarded a grant from the Ralph C. Wilson Jr. Foundation which funded the Framework Plan for the Joe Louis Greenway. The Framework Plan finalized the route of the greenway, which was largely based on feedback from residents.  In addition to the route, the Framework includes recommendations for future land use, signage, green infrastructure, and public art.

END_OF_DOCUMENT_TOKEN_TO_BE_REPLACED

The Citizen Advisory Council (“CAC”) is comprised of eight community members—one individual from of the five Detroit Council Districts connected by the greenway, as well as representatives from Hamtramck, Highland Park, and Dearborn. These community leaders were selected based on their advocacy in the community and deep connections to other residents, as well as their interest in non-motorized transportation and green space. 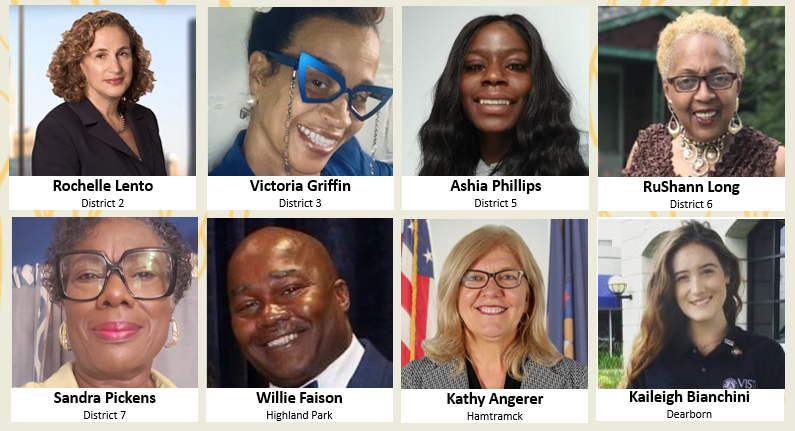 LISTEN TO A PAST COMMUNITY MEETING

APPLY TO BE A STEWARD OF THE JOE LOUIS GREENWAY. Stewards share information about the project, help advertise public meetings, attend community events, and share resources.

If you are interested in becoming a steward, please email [email protected] with your contact information and interest.

Dec 16
Detour Detroit: "The Joe Louis Greenway could transform Detroit. What about the neighborhoods around it?"
News

"Though city plans are underway because of the Greenway, there’s been a common theme of prioritizing the residents’ voices to help sustain a legacy

This meeting is intended to update community members about the construction progress of the Joe Louis Greenway. In

https://youtu.be/p9f4GNE4p0c The Future Path of the Joes Louis Greenway

Who is Joe Louis?

Joe Louis was a boxing legend and a proud Detroiter. His significance as an American hero and icon cannot be overstated. Although he’s become a prominent cultural symbol in our city, many people are unaware of the important role he played as an advocate for social justice. Joe Louis worked tirelessly to advocate for the rights of Black Americans and to promote social justice in the United States. The Joe Louis Greenway is more than a tribute to his legacy. It celebrates Joe Louis as a role model, as someone whose values can guide this project and the people it brings together.

“My gift was fighting and through fighting I was to uplift the spirit of my race.” Joe Louis.

What is a “Greenway?”
Why are Greenways important?

Urban greenways and parks play a vital role in the social, economic and physical well-being of American cities and their residents. In addition to improving the mental and physical health of adults and children through increased access to recreational opportunities, greenways generate economic value. Connected open space networks attract non-resident visitors who put new dollars into local economies—the value of these spaces brought into even further relief by the impacts of COVID-19.

Are there existing Greenways in the City of Detroit? 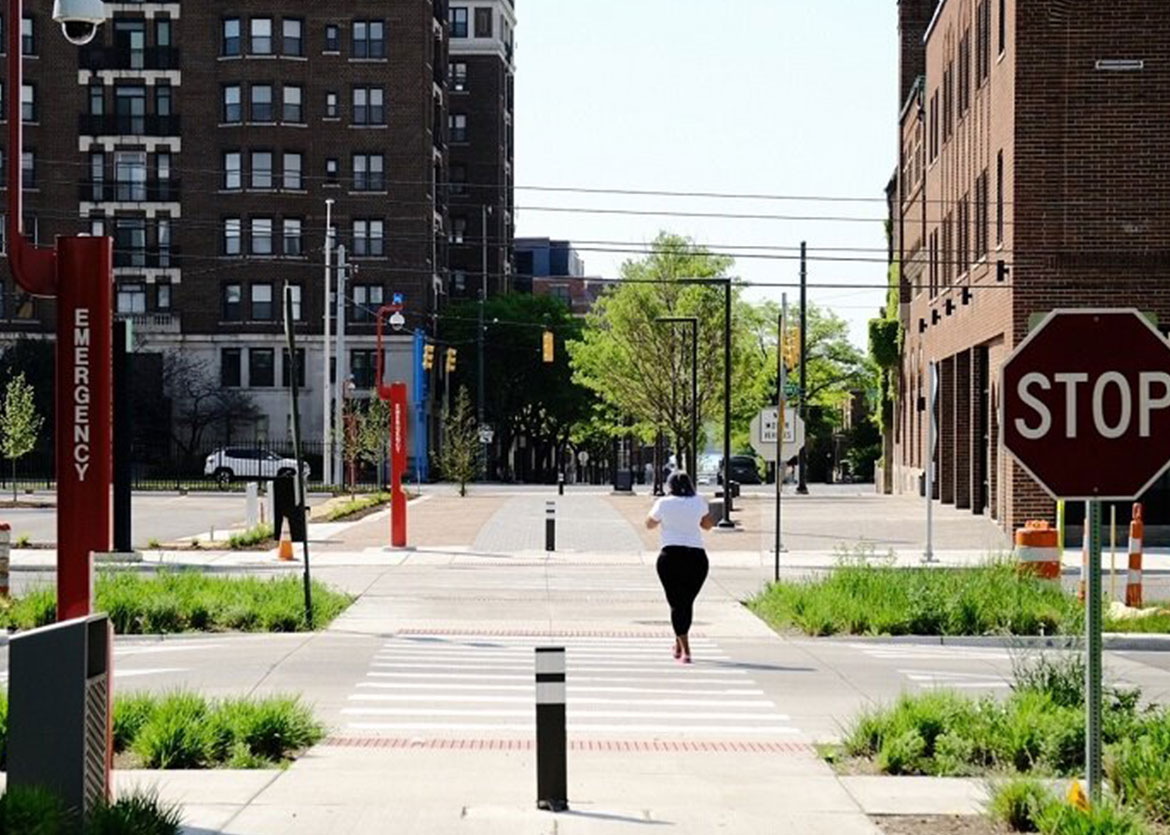 2. The Dequindre Cut Greenway is an urban recreational path that opened to the public in May of 2009. The two-mile greenway was developed through a public, nonprofit and private partnership and offers a pedestrian link between the East Riverfront, Eastern Market and several residential neighborhoods in between. 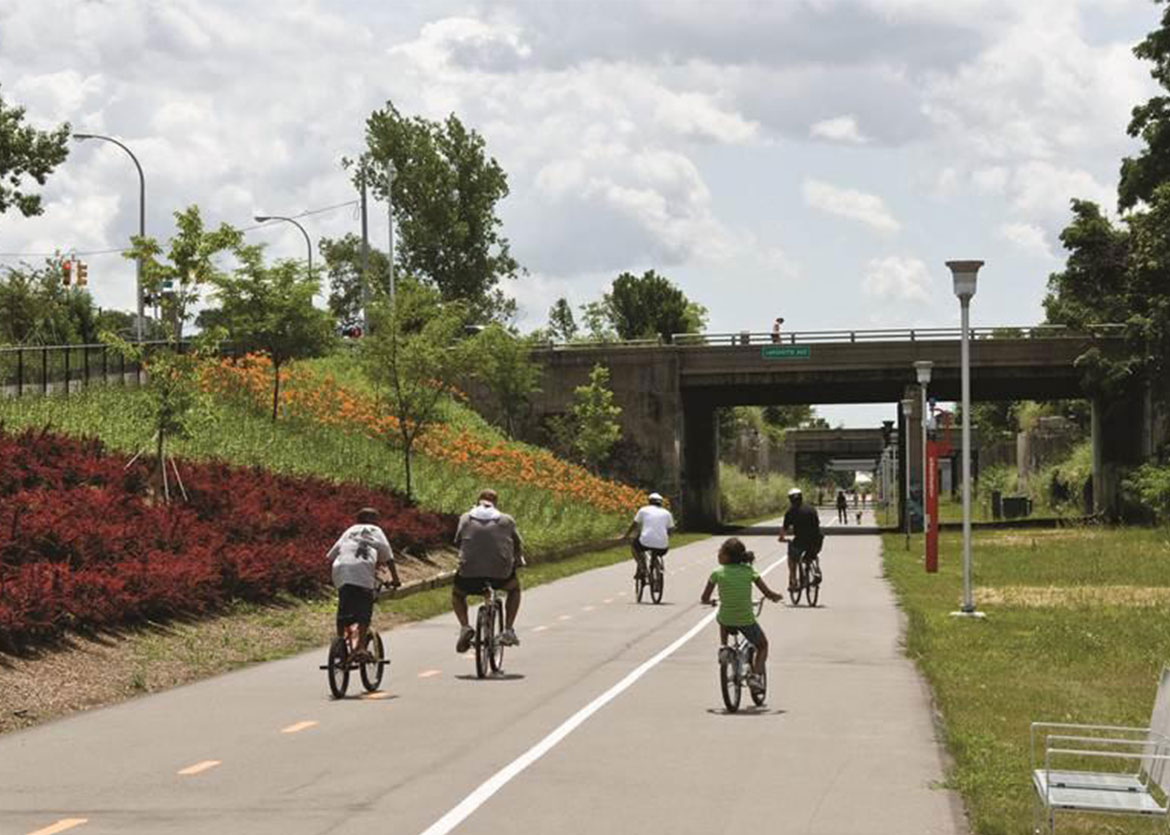 Are there existing urban greenways in other U.S. Cities ?

Yes, and the JLG builds on lessons from other US cities.
The Atlanta Beltline has spurred over $7B in economic development over 22 mile loop (33 miles of trail in total). Estimated 50,000 one year construction jobs, 23,300 permanent jobs through 2019 https://beltline.org/flipbook/2020-annual-report/
Home prices on western portion of Chicago 606 have risen 350% since 2014

The 606 is an urban greenway project in Chicago.  The 606 is a converted abandoned rail corridor, formerly known as the Bloomingdale Line. Since 2012, the 606 has had a catalytic impact on surrounding communities, and a dramatic spiral upward in the housing market. Read more here: https://www.housingstudies.org/releases/measuring-impact-606/

The Hudson River Greenway in New York City. The greenway is separated from traffic and runs through a series of parks along the Hudson River and the west side of Manhattan, offering beautiful views of the water and skyline along its two-lane, 12.9-mile paved path. Signals and directional signage are  prevalent to ensure safe interactions between cars, bikes and pedestrians. https://www.traillink.com/trail/hudson-river-greenway

The greenway will connect the existing Riverwalk and Dequindre Cut. The full loop will run through 23 different Detroit neighborhoods and connect to the cities of Dearborn, Highland Park, and Hamtramck. Upon completion, 40,000+ residents will be able to walk to the pathway within 10 minutes. Check out the map to see if you live near the planned route. 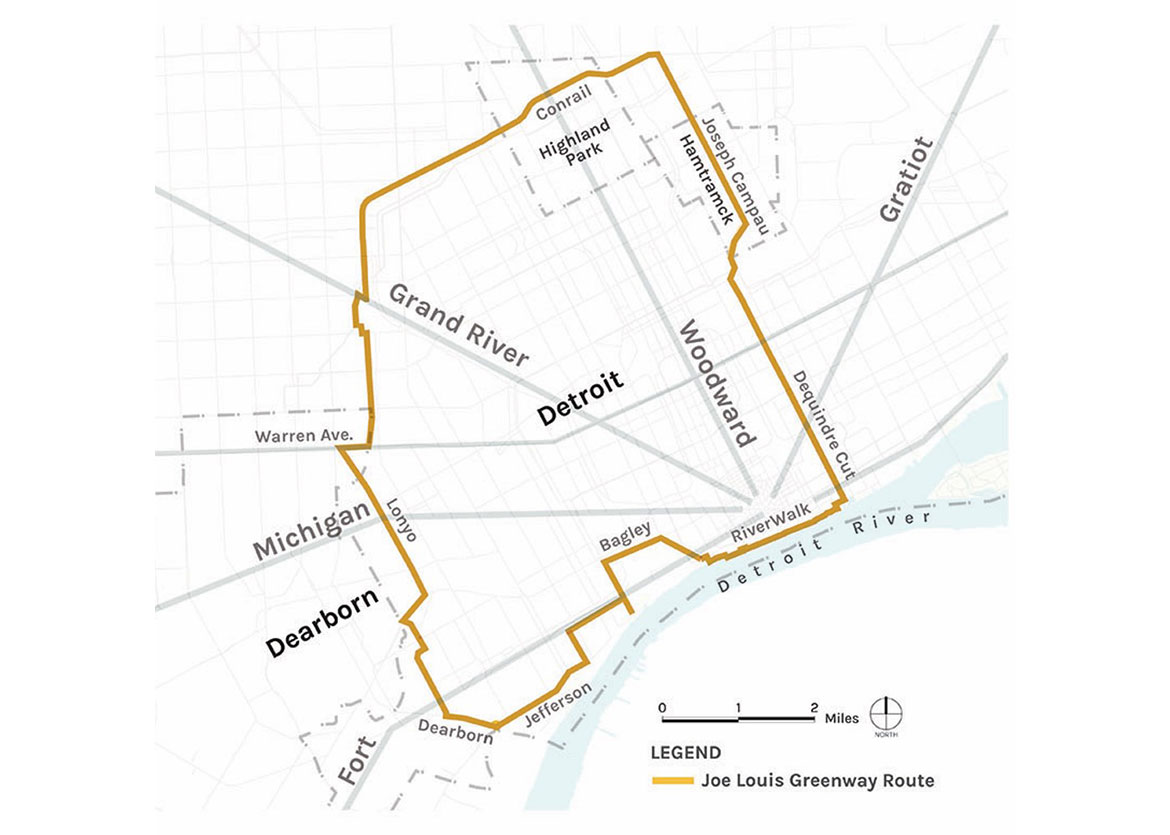 How were communities involved in the planning process?

The public engagement strategy was and is instrumental in developing the framework plan and the continuous planning taking place for all segments. The strategy responded to both the current conditions as well as the future vision Detroit residents want to see. The strategy for public engagement focused on promoting active participation and co-design activities throughout the framework planning process.These strategies sought to reach beyond surface-level desires and concerns to articulate and address fears, hopes and dreams that are more difficult to articulate. Each of the sessions were designed to provide a variety of opportunities for resident engagement and input through participatory design activities, guided discussions, storytelling sessions, panel discussions, surveys, feedback cards and informational boards. Most importantly, the community engagement strategy remained flexible and adaptable throughout the process in order to respond thematically to community desires and concerns. While close attention was paid to data collection and evaluation of feedback, the framework plan was directly shaped and guided at every step by residents and stakeholders who live, work and play along the Joe Louis Greenway route.

The engagement strategy also includes  a Citizen Advisory Council (“CAC”), composed of eight community members—one individual from of the five Detroit Council Districts connected by the greenway, as well as representatives from Hamtramck, Highland Park and Dearborn. These community leaders were selected based on their advocacy in the community and deep connections to other residents, as well as their interest in non-motorized transportation and green space. These volunteers committed to the long-term investment and participation in the Joe Louis Greenway—from planning and design, through implementation and maintenance.

In addition to the Joe Louis Greenway meetings, GSD staff shared information and collected feedback at an additional 44 meetings and events, as requested by community members or city leaders. These meetings  included small block club meetings, festivals, and Department of Neighborhood Meetings. 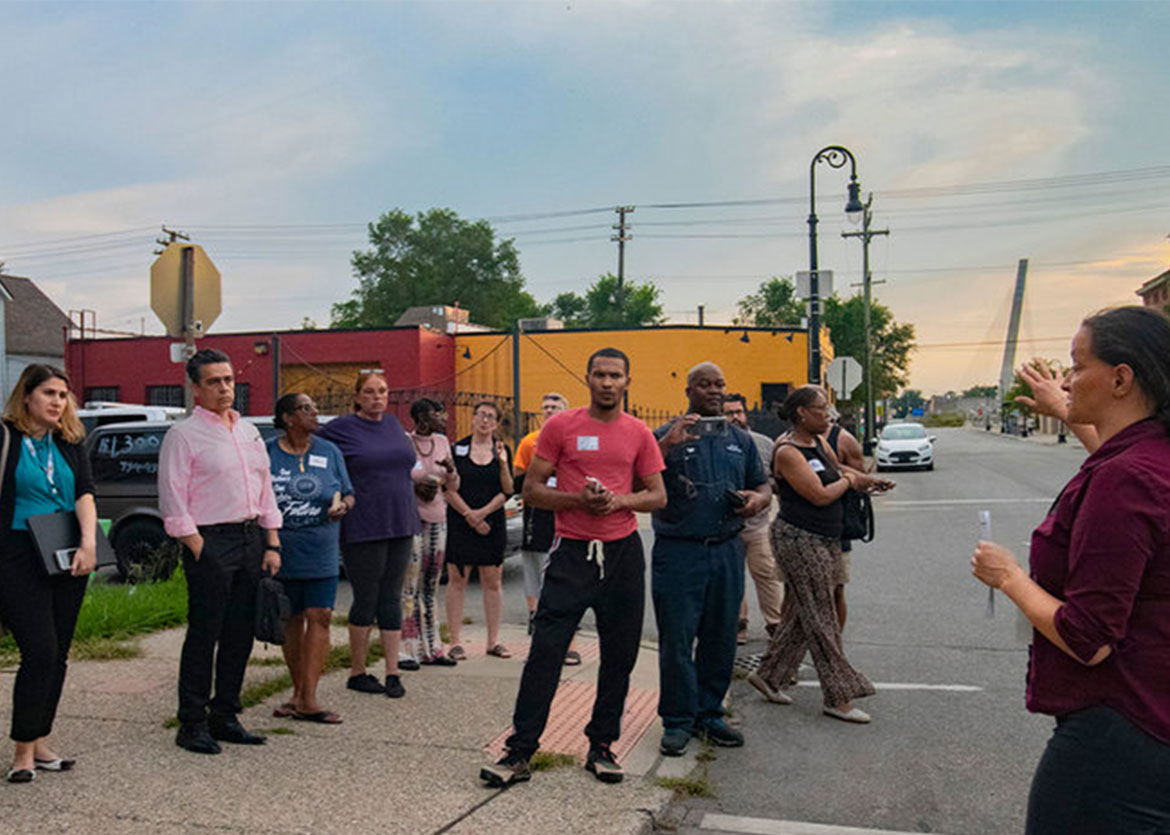 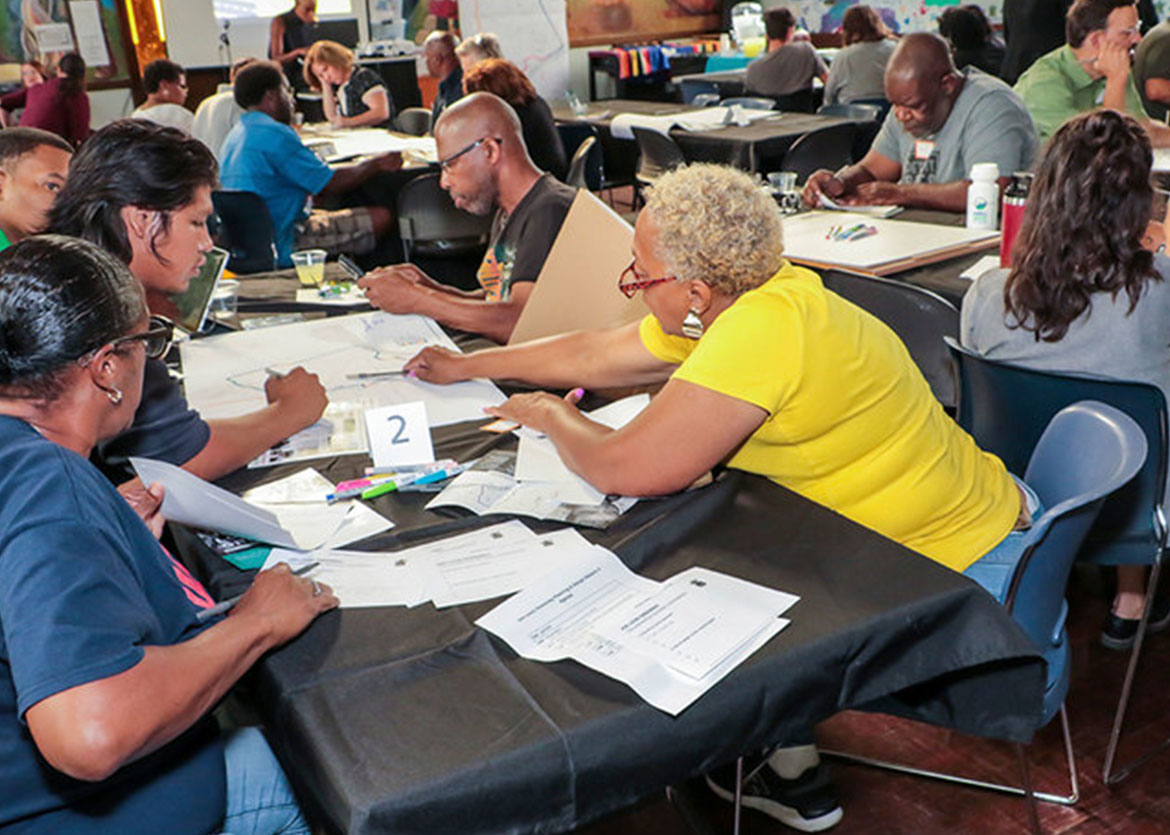 Will the Greenway be accessible for everyone to use?

Children learning to ride their bikes, senior walking groups, commuters on electric scooters, people using wheelchairs, people walking dogs—these are just some of the many ways people will enjoy the Joe Louis Greenway. The pathway will allow for different users including:

Will the greenway be safe to use?

Safety is a top priority for residents and neighborhoods. In consultation with the Detroit Riverfront Conservancy and Detroit Police Department, there are a few essential safety elements on the greenway including:
Lighting

Who are the supporting partners of the project?

How will the JLG make a positive impact on the City of Detroit? 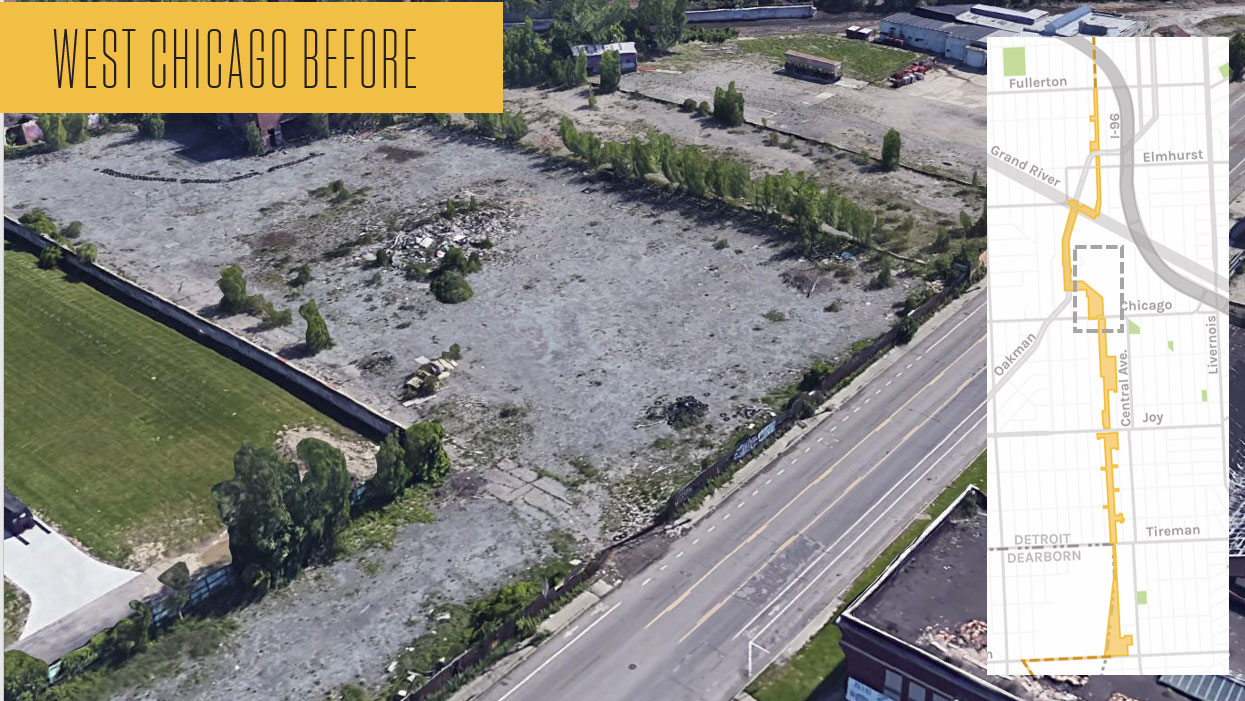 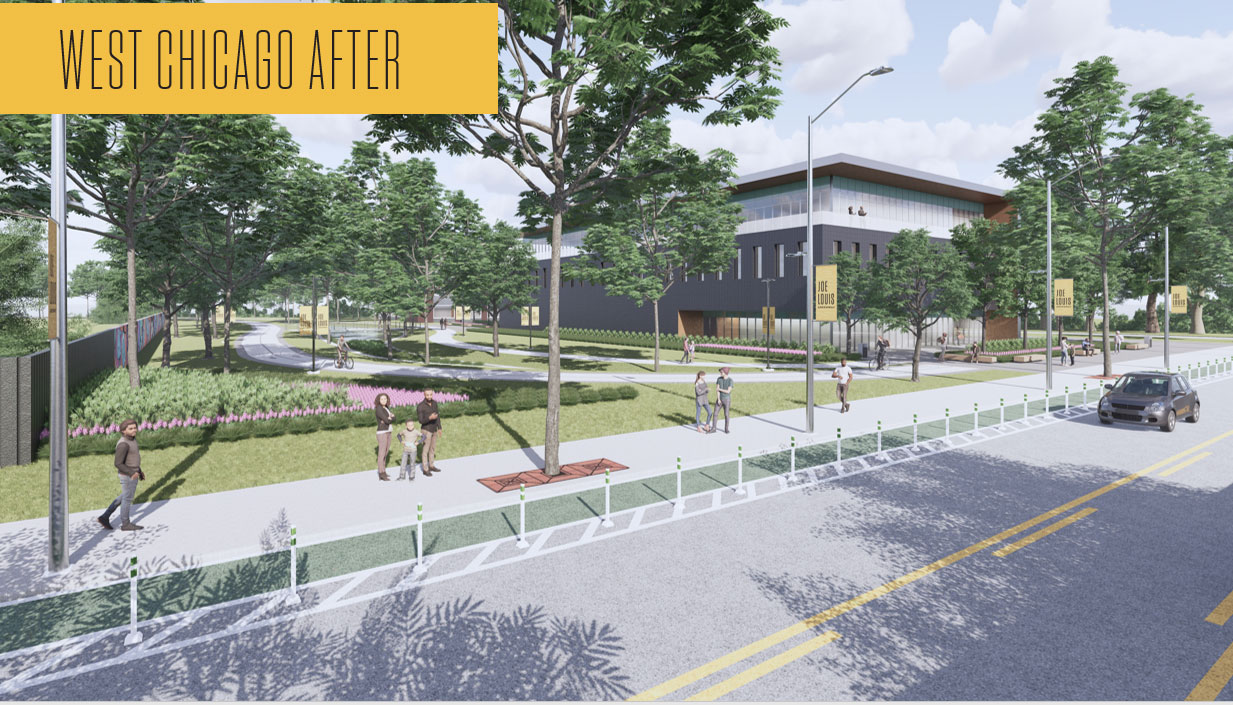 Currently, the construction of the pathway is slated to be completed in 5 to 10 years, dependent on fundraising efforts. Additional amenities, programming, art, will be planned and developed in the years after it is fully constructed.

How can I learn more, share ideas, and show support?