DETROIT – The City of Detroit’s planning efforts for the massive Joe Louis Greenway has received national recognition from the American Planning Association for its efforts to put diversity and inclusion at the forefront of this transformational project.

The Joe Louis Greenway is a 27.5-mile pathway that will connect 23 neighborhoods and five cities including Detroit, Hamtramck, Highland Park and Dearborn to each other and to the nationally acclaimed Detroit riverfront, Dequindre Cut, Belle Isle and other trails. Upon completion, more than 40,000 residents will be able to walk to the greenway within 10 minutes. The first section of the Greenway from Joy to Tireman is set to open on Oct. 29, and greenway construction is currently slated to be fully completed in five to 10 years, depending on fund-raising efforts.

This monumental project is based on a framework plan shaped by voices from the community. The General Services Department team led 14 community meetings and attended more than 40 other events and meetings to gather feedback from residents to create the plan. The American Planning Association awarded the plan this month with the 2022 Advancing Diversity and Social Change in Honor of Paul Davidoff Award.

“Our work to create a community-led model for building the Joe Louis Greenway has led to rebuilding trust with residents and given voice to residents who have felt unheard for a long time, said Brad Dick, Group Executive, Services & Infrastructure. “That is just one of the ways this project is transforming the City. We are proud to receive this prestigious award that represents not only our work but the work of the residents we engaged with.”

The award is named for the founder of the urban planning theory, advocacy planning, which works to represent the interests of various groups within society. The award jury said, "This is serving residents of communities that haven't had access in the past. A great project that deserves recognition."

This award honors the work of all those residents who helped to shape the vision of the greenway. Residents were encouraged to voice concerns about issues they face every day. This process built greater trust with the community, and many continue to use the framework as a tool for neighborhood stabilization and a model for proactively addressing community-based issues. The planning process also advanced a critical dialogue on equitable economic development benefits of the greenway as a means of inclusion and identifying ways to build community right alongside the greenway.

The greenway offers far more than just a path. Urban greenways and parks play a vital role in the social, economic and physical well-being of American cities and their residents. In addition to improving the mental and physical health of adults and children through increased access to recreational opportunities, greenways generate economic value and economic development, new jobs and a place for community businesses to grow and thrive.

In addition, the greenway is playing a huge role in the City’s efforts to turn blight into beauty. Beyond converting an abandoned rail line into a recreational trail, crews building the greenway have already removed hundreds of illegally dumped tires, hundreds of tons of concrete and steel, and more than 500 tandem trucks’ worth of other trash. Blighted buildings that have been eyesores in their communities have been demolished.

The Joe Louis Greenway Framework Plan was funded by The Ralph C. Wilson Jr. Foundation and the Framework team included SmithGroup, Studio Incognita, Sidewalk Detroit, Toole Design, and HR&A who helped organize and develop the plan. In 2019, when planning was initiated by the General Services Department recognized the importance of involving the community early on and developed the Joe Louis Greenway Community Advisory Council who along with residents led the community voice and guided city officials during the planning process.

The City of Detroit Planning and Development Department is now building off the framework plan to develop a Neighborhood Planning Study. The study will examine the current condition of neighborhoods and recommend strategies to support, stabilize, and equitably develop these adjacent areas.

“Community engagement is at the heart of everything we do,” said Antoine Bryant, director of the City of Detroit’s Planning & Development Department. “Our team will work hard to make sure we capture as much feedback from residents as we can for the neighborhood planning study, ensuring that Detroiters are the ones who guide the Joe Louis Greenway planning process. This resident-led process will ensure that we have a greenway that is as equitable as it is beautiful, and that Detroit residents will see the most opportunities possible from its creation.”

Joe Louis was a boxing legend and a proud Detroiter. His significance as an American hero and icon cannot be overstated. Although he’s become a prominent cultural symbol in our city, many people are unaware of the important role he played as an advocate for social justice. Joe Louis worked tirelessly to advocate for the rights of Black Americans and to promote social justice in the United States. The Joe Louis Greenway is more than a tribute to his legacy. It celebrates Joe Louis as a role model, as someone whose values can guide this project and the people it brings together.

For more information, and to view the framework plan, visit www.joelouisgreenway.com. 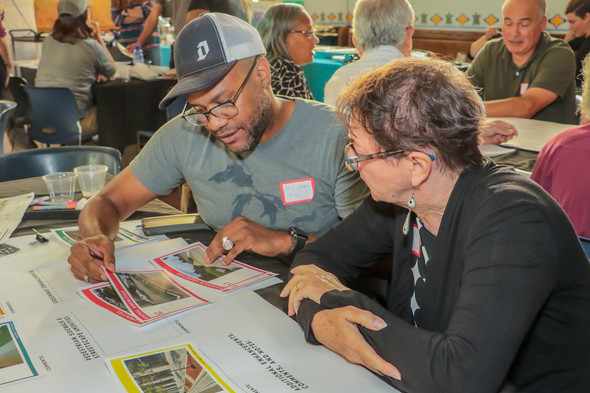