Detroit - City of Detroit today announced a second round of speed hump installations for 2021, bringing the total for this year’s program to 5,200. Due to maximizing resources allocated to the 2021 speed hump program and continued resident demand, DPW will be expanding the speed hump program to an additional 460 blocks and 700 across the city through November 15th.

Earlier this year, Mayor Mike Duggan announced the city would install 4,500 speed humps on residential streets across the city to help address concerns about speeding and safety.

“The speed hump program has been one of the most popular city programs we’ve ever announced and they really seem to be helping,” Mayor Duggan said.  “We saw the opportunity to reach more neighborhood blocks with available funding so we want to get them in before the end of this year, rather than wait until spring.”

The speed hump program is being run through the Department of Public Works.

“We are proud to do our part in curtailing speeding and reckless driving which has become a huge public health and safety concern,” said Dayo Akinyemi, DPW deputy director. “It’s important for residents to know our commitment to work with them and other departments to keep them safe while we simultaneously move to change harmful behavior.”

Residents can find out what blocks were selects by visiting the City of Detroit website: https://detroitmi.gov/departments/department-public-works/complete-streets/traffic-calming

If a block wishes to opt-out of the program, please provide a letter from your block club captain speaking on behalf of all residents on the block or signed petition by September 22. Scan the QR code or click the link to the City website to submit petition. All requests and petitions to opt-out for a speed hump must be submitted through the City of Detroit website.

“If your block was selected as part of the initial program posted in March of 2021 and you still have not received your speed hump, it could be due to utility construction on your street or a need for resurfacing,” said Caitlin Malloy-Marcon, DPW deputy director Complete Streets. “Your speed hump is still forthcoming and will be installed when the street work is complete.”

As a reminder, the criteria that we consider for placing the speed humps is as follows:

DPW is on pace to complete the installation of 4500-speed humps that was published in Spring of 2021 by mid-November. The department is now releasing a second round of 2021 speed humps from the more than 17,000 requests received from residents. 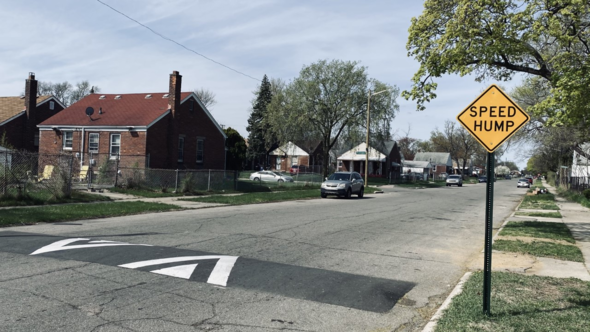