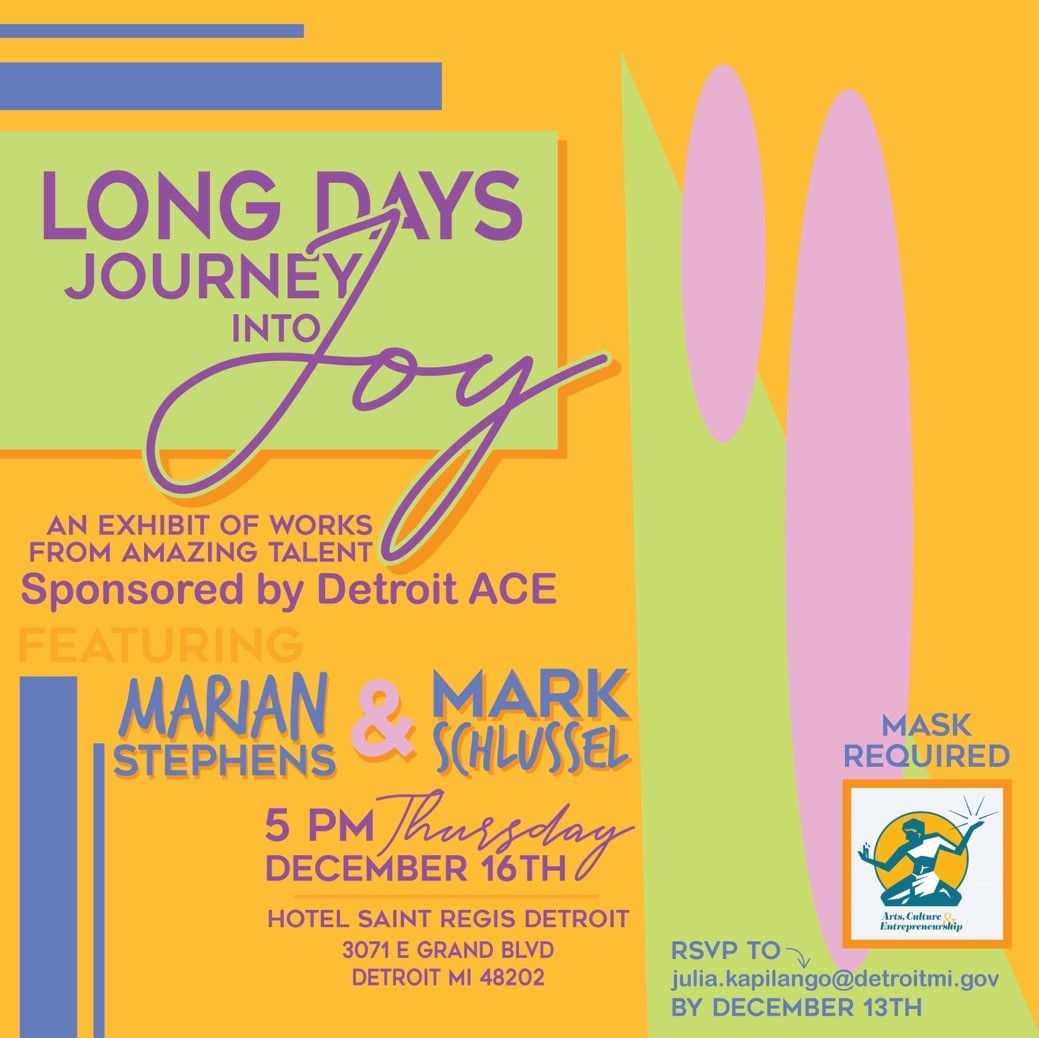 The show, “Long Day’s Journey into Joy” will be held on Thursday, December 16 at 5PM at the Hotel St. Regis, 3071 E. Grand Blvd. Like the first quarterly exhibit, “Young, Gifted and Woke,” which showcased young artists, the new show highlights the work of two veteran artists whose work deserves our attention.

The two veteran artists being showcased are:

MARK SCHLUSSEL is an abstract artist whose work is a combination of cerebral and emotional. After extended legal and business careers, he began delving into the world of color and texture over a quarter-century ago. He worked exclusively in pencil, developing drawings in the abstract, his geometric model of design discipline and color application a product of his legal training at the University of Michigan Law School. Those drawings show the discipline of a lawyer presenting his case. Over 20 years, however, Schlussel has developed a unique style that expresses the power of emotion through his use of texture, shape, and color. He uses the power of color, or in many instances, the absence of it, to express his inner soul. Each of his works speaks differently, allowing observers to experience the paintings from their own unique life experiences.

MARIAN CAMILLE STEPHENS is a lifelong Detroiter who attended Cass Technical High School and Wayne State University, where she earned her Bachelor’s and Masters’ degrees in Art Education. She worked in the Detroit Public Schools for 41 years, the first 14 teaching in elementary and junior high school. But a mentor convinced her to teach high school students. That is where she found her “sweet spot.” She was named “High School Art Teacher of the Year” by the Michigan Art Education Association. She retired in 1997 after an illustrious career and became an active artist. In the 1950s, she was invited to join Art’s Extended Group, which would later become a gallery providing exhibit space to artists of color. Like her brother, the artist Richard Kinney, she embraced her art and has continued to exhibit with several arts organizations. She is currently exhibiting in a group show at Hannan House Detroit and is thrilled to be a part of the Detroit ACE quarterly exhibits.

The announcement comes the same week as the City called all Detroit creatives - designers, painters, musicians, photographers, and storytellers - to register to become official vendors with the City of Detroit. Official vendors are notified when any departments are seeking services.

“One of the most important tasks that Mayor Mike Duggan has given me is to ensure that our entire creative community gets opportunities to shine,” said Rochelle Riley, Director of Arts and Culture. “This is one way to do that. You can’t bid on projects you do not know about, so we want more and more creatives to know what the City is doing and where their talents can be used.”

The fair will be held from 10 a.m. until 2 p.m. on Wednesday, December 15 on the 13th floor of the Coleman A. Young Municipal Center at 2 Woodward Avenue downtown. Artists must bring ID, EIN number, any certifications they already have and banking Information.

The fair is first come, first seated, so registration is required. Artists can register at detroitartsandculture.com.