Over the next five years, the Detroit Water and Sewerage Department (DWSD) is investing $500 million through a Capital Improvement Program (CIP). These projects, which are the largest in decades, will help us maintain the city’s water and sewer systems for future generations. The effort to upgrade Detroit’s systems also reflects the city’s mission to put more Detroiters to work. 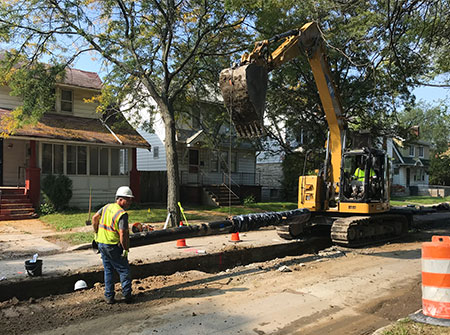 The CIP’s goal is to improve service delivery and quality of life in the neighborhoods by :

Since the program launched in 2018, DWSD has repaired or replaced 25 miles of water main, 22 miles of sewer collection piping and 173 lead service lines . As part of a new neighborhood approach to be launched in summer 2019, DWSD began assessing the water and sewer systems by neighborhood, rather than by the number of water main breaks and basement backups which was a scattered approach across the city. In 2018, DWSD assessed 75 miles of water main, including the fire hydrants and valves, and 85 miles of sewer collection piping in nearly 10 neighborhoods. In 2019, DWSD will begin the neighborhood approach to water and sewer upgrades, including green stormwater infrastructure, starting with Cornerstone Village on the eastside and North Rosedale Park on the westside.

With older housing in Detroit, it’s possible the city has the most lead service lines of any in the Midwest, which is why the CIP includes full lead service line replacement. A service line is a pipe that takes water from the city’s water main into your home or business. A good rule of thumb in Detroit is that if a house was built before 1950 it’s likely to have a lead service line unless it was replaced at some point. Residential single family homes are the most common to have lead service lines because lead was only used for pipes that are 2-inches in diameter or less.

As part of its CIP, DWSD has chosen to replace full lead service lines when crews are on the street replacing the water main. This complies with the revised Michigan Lead and Copper Rule, which requires water utilities to remove full lead service lines at 5% per year unless an alternate schedule in an asset management plan is approved by EGLE (Environment, Great Lakes & Energy). DWSD started a Full Lead Service Line Replacement Program in 2018 where existing full lead service lines are replaced with copper with property owner/occupant permission.

DWSD makes extraordinary efforts to communicate with customers prior to construction through door-to-door canvassing, letters, plus community and block club meetings. Residents will receive water filters, a six-month supply of cartridges as well as instructions for faucet flushing and aerator cleaning as precautionary measures during construction..

As part of the CIP, DWSD is also investing in new equipment and hiring Detroiters, including returning citizens, to address the long-deferred maintenance.

DWSD is one of the largest water and sewer utilities in the United States, serving more than 235,000 accounts that includes a residential population of nearly 700,000. DWSD’s water network consists of more than 2,700 miles of water main and nearly 3,000 miles of sewer collection piping. DWSD has a rich history as a public utility dating back to 1836.

Today, DWSD focuses on serving the residents, businesses, non-profits, faith-based organizations and other account holders that rely on water and sewer services within the city of Detroit.

On January 1, 2016, the City of Detroit began leasing regional water and sewer infrastructure, as well as water and wastewater treatment facilities, to the Great Lakes Water Authority (GLWA). The regional system, built by DWSD, serves 126 municipalities in seven southeast Michigan counties. The agreement between DWSD and GLWA includes a $50 million annual lease payment for 40 years to replace and rehabilitate DWSD’s aging water and sewer system. DWSD continues to retain ownership of the regional assets.

Water and sewer upgrades for calendar years 2021 and 2022

An update issued in December 2019 on upcoming construction in Cornerstone Village to upgrade the water and sewer systems.

An update issued in December 2019 on upcoming construction in North Rosedale Park to upgrade the water and sewer systems.