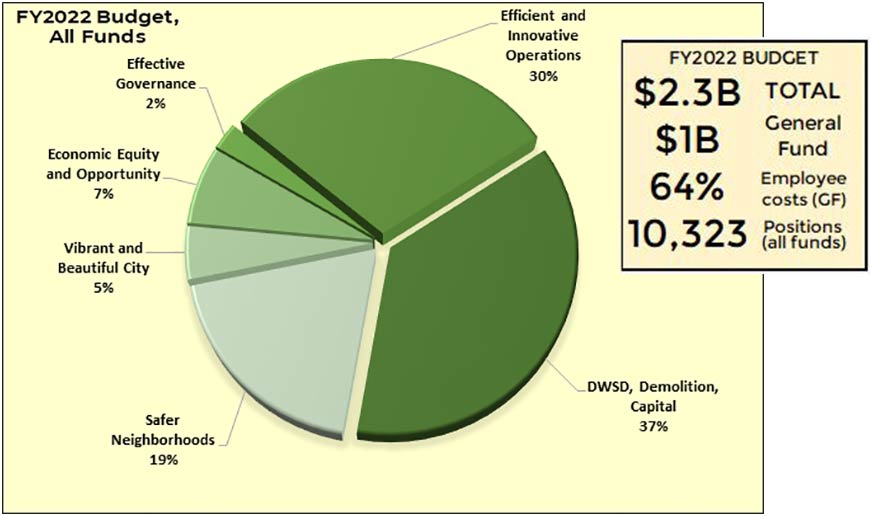 
Financial reports for the City of Detroit

What are Detroiters' priorities

The Office of Budget is responsible for all aspects of the City’s annual budget and four-year financial plan, under the leadership of the CFO and in coordination with other OCFO divisions and City departments. This includes, but is not limited to, revenue forecasting and economic analysis, development of the Mayor’s budget recommendation, presentation of the budget to the City Council, negotiation of the adopted budget with the City Council, implementation of the budget after adoption, monitoring the budget to ensure continued fiscal balance, and ongoing budget and program analysis.

How can I be heard in the budget process? How do I make my budget priorities clear?

There are several opportunities for the public to get involved in the city budget. The Budget Office hosts public meetings and an annual interactive to hear “Your Budget” priorities. City Council in their deliberations hold public hearings with each city agency, before adopting an Annual Budget. At any time, give your feedback using the inbox, [email protected]. And stay tuned to the Budget Office webpage for its documents.

What is the difference between the Mayor’s Recommended Budget and the final Adopted Budget?

The budget development process calls for the Mayor to develop a proposed annual budget every year, which is submitted to City Council on March 5. By law, City Council has final approval of the budget. If they make changes, the Mayor may veto, then Council may override his veto, and their changes are adopted.

What is the “fiscal year” and why is it different from the calendar year?

The city of Detroit fiscal year – the period for which it plans and accounts for its resources – runs from July 1 to June 30. Fiscal year periods are set by jurisdictions for practical purposes related to administering their funding sources.

Under bankruptcy reforms, an Office of the Chief Financial Officer was formed for all financial functions in the city. The Chief Financial Officer (CFO) is proposed by the Mayor and must be approved by City Council. The Budget Office is one of 8 different divisions contained within the OCFO. These divisions specialize in property assessment, revenue collection, accounting, bill payment and other finance requirements.

How can I find out if a project is happening in my neighborhood?

The budget funds programs that define overall purposes of funding. Things like park improvements or streetscape designs. The best way to find out about specific project locations and timing is through the department that administers the funding you are interested in.

What is an “FTE” and why is it in every agency budget?

FTEs, or full-time equivalent positions, convert part-time work hours to a forty-hour base. Two summer-only park maintenance assistants would equal one FTE, because they each work ½ of the year. FTEs are not temporary or contracted workers, and they perform the ongoing base of city services.

How are Enterprise Agencies different from General Fund Agencies?

Budget documents reference “Enterprise Funds” and “Enterprise Agencies”. City of Detroit enterprises are like businesses in that they collect revenues from the services they provide. These revenues cannot be used on activities outside of the purpose they were collected. The Detroit Water & Sewerage Department is an Enterprise Agency; its collection of water bills must go into the Water Fund for use on water system infrastructure and services, and its collections for sewerage must go into the Sewerage Fund for use solely on sewerage infrastructure and services. General Fund Agencies serve broad purposes defined by City officials, and funded by general revenues collected from taxes and state revenue sharing.

How do I find out about other public service providers’ budgets?

Other public service providers may have different fiscal years, but all will produce annual budgets to plan out their spending and annual financial reports to account for expenditures they have made. Consult their websites for contact information.

Who else provides public services?

YOUR PUBLIC SERVICES ARE PROVIDED BY MANY DIFFERENT ORGANIZATIONS

The City of Detroit is a municipality, with general responsibility for well-being in its borders. The City has authority to tax in order to provide services, and it creates its own Charter of rules and processes, within State of Michigan limits. Other providers of public services in Detroit have their own leadership and own funding, and work in various levels of collaboration with the City.

State of Michigan maintains interstate highways and public health, keeps the peace, and supports economic development and various aid programs across localities, among a variety of services.

It’s your home, your neighborhood, your city – and your city government  works for you

How Your Budget Works

How the City of Detroit Budget is Prepared, Organized, and the Timeline