How Your Budget Works

How the City of Detroit budget is prepared

CITY COUNCIL approves the city budget, either by adopting the Mayor’s submission or by approving amendments to it.

The OFFICE OF THE CHIEF FINANCIAL OFFICER (OCFO) is the centralized financial management organization for the city of Detroit, setting strategies and overseeing administration of financial functions.

REVENUE ESTIMATING CONFERENCE establishes the official economic outlook, or “forecast,” and the forecast of anticipated City revenues. The biannual conferences (September and February) set revenues for the City’s annual budget.

STATE OF MICHIGAN FINANCIAL REVIEW COMMISSION (FRC) was created to monitor City compliance with the Plan of Adjustment, confirmed by the Bankruptcy Court, November 12, 2014. The FRC provides oversight of City financial activities, for at least 13 years, depending on the City meeting certain criteria such as balanced budgets.

PUBLIC  PARTICIPATION IS KEY
Detroit residents and other stakeholders are invited to learn about city government year-round and to participate in the budget through the Annual Public Budget Meeting, “YOUR BUDGET” Priorities Comment, City Council District Budget Priorities Forums and our report archive.

ANNUAL BUDGET PROCESS TIMELINE
OCFO Controller’s office
Accountants track expenses by agency and operation throughout each fiscal year. At the end of every fiscal year, the City closes its books and they are independently audited. They produce the Annual Comprehensive Financial Report by calendar year-end.

OTHER CITY OF DETROIT RESOURCES PLANNED BY THE BUDGET OFFICE 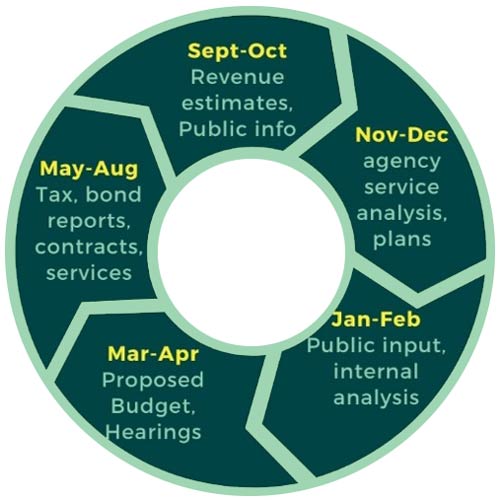 How the City of Detroit budget is organized

The City of Detroit budget is approved each April for the period July 1 to June 30. The “Operating Budget” covers recurring day-to-day activities, such as staff and supplies, “Capital” covers long-lived assets such as building improvements and equipment purchases, and “Grants” include what we are accepting from State and Federal governments and other 3rd parties, largely for specific projects.

Appropriations are the central part of the City Budget. City Council approves an amount for each appropriation, to cover the 12-month fiscal year, and must approve changes to that amount. The Legal Budget is a list of those authorized amounts.

The Adopted Budget is the sum of the appropriation amounts approved by City Council, and is found in the Four-Year Financial Plan. Forecast years show expected future amounts, given currently known conditions and plans. Recommended amounts are what the Mayor has brought to the City Council. Actual amounts are what was recorded in prior fiscal years.
The Adopted Budget is organized in different ways, for accounting purposes:

Each appropriation belongs to a Fund, under a Department, and is classified into one or more cost centers and one or more object codes. An appropriation may or may not include a Project.
Example of an account string:

The financial data tables identify the major groups and expenditure account codes for the city (in Section A) and for agencies (in Section B). Detail is by Object Code, by Fund, by Cost Center and by Positions.

Departmental Operating Budgets, in Section B of the Four-Year Financial Plan, include the programs and services funded, and broad city outcomes served. These sections describe agency Mission, or purpose; their organization; and their strategic service priorities.