The City of Detroit’s bond-funded blight removal program, Proposal N, approved by voters one year ago, is making a significant impact in neighborhoods that once felt left behind.  A key promise of the Proposal N ballot initiative was to finally address vacant and run-down homes in neighborhoods the city couldn’t previously reach, due to federal restrictions on where the Hardest Hit Funds could be spent.  With no geographic restrictions on the city’s bond funds, the Demolition Department has been concentrating its efforts on neighborhoods that have waited years for the city's blight removal program to reach them. One area seeing significantly more attention is the Mapleridge neighborhood on the city’s east side, which is south of Seven Mile and east of Gratiot.  Since Prop N was approved, Detroit’s Demolition Department has completed 757 demolitions, has 2,200 more under contract, and more than 900 in the demolition pipeline.  Meanwhile, the stabilization of 231 salvageable homes has been completed, with another 1,800 under contract. Today, lifelong Detroiter and community advocate Kim Marble watched with great relief as one of the Demolition Department’s Detroit-based, black-owned contractors, Gayanga, knocked down two vacant structures that have stood for years on either side of her tidy Cedargove street home.  “The work the City’s doing on my street and across this whole neighborhood means everything to me,” shared Marble. “It’s finally sending the message to this community that our homes and our neighborhoods can be beautiful again like they used to be.” Since May, 56 vacant properties have been demolished or stabilized in the Mapleridge neighborhood, with an additional 221 planned demolitions and 109 planned stabilizations to come. Marble has lived in the Mapleridge community for 39 years, spearheading community programs and running a catering business from her home. With more blight removal activity taking place in her community, Marble is now raising funds to transform the newly created vacant lots in her neighborhood into a designated safe space for neighborhood children.MAINTAINING TRANSPARENCY WITH RESIDENTS   The City's Demolition Department recently debuted two new online dashboards that provide residents with up-to-date information on what has been done and what's about to be done, with demolition and vacant home stabilizations under the bond-funded program. The Demolition Tracker gives residents the option to view demolition and stabilization activity by City Council District or neighborhood, while the Neighborhood Improvement Tracker allows users to drill down by address, providing detailed information on activity within a one-mile radius of their home or business. Residents can access the newly published dashboards via the Detroit Demolition website.  “Proposal N funds have allowed us to move more efficiently than ever to improve the safety, value and health of our neighborhoods,” shared LaJuan Counts, Demolition Department Director. “As we continue demolition and stabilization activity in communities like Mapleridge, we’ll continue to prioritize being as visible and accessible as possible, providing user-friendly ways for residents to stay current with our real-time progress.” 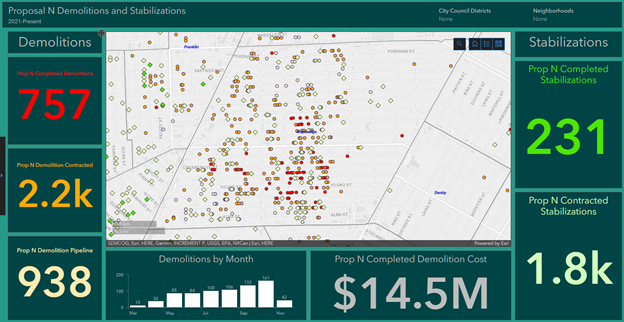 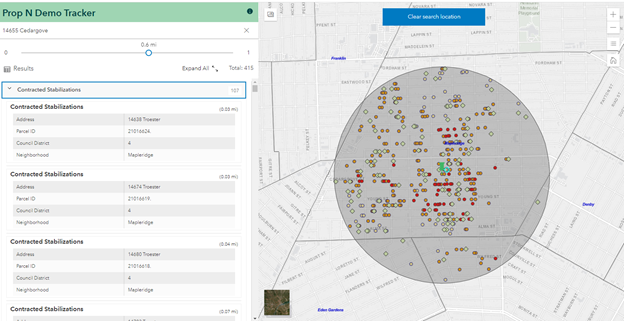