Apr 05
POSTED BY Office of Development and Grants 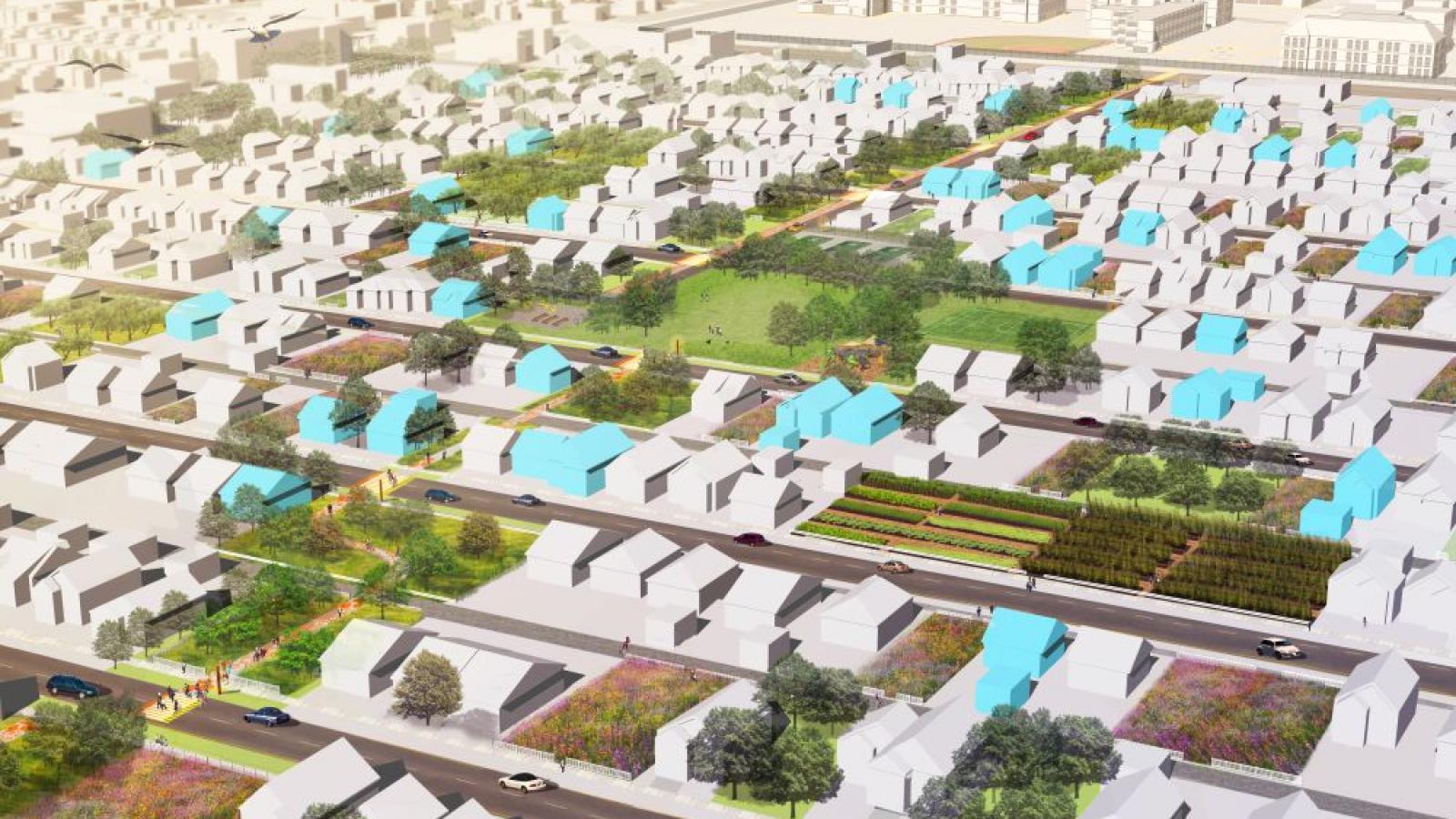 Mayor Mike Duggan announced today the development team that will lead a 2-year-long project to revitalize the Fitzgerald neighborhood for the nearly 600 families who live there near Livernois and McNichols.

Fitz Forward is a partnership between local development firms Century Partners and The Platform as the developer for the Fitzgerald Revitalization Project. The holistic neighborhood project is the one of many supported by the $30 million Strategic Neighborhood Fund announced by the mayor in his State of the City address in February.

The city and partners Kresge Foundation, Knight Foundation, JPB Foundation and Rockefeller Foundation will invest more than $4 million in the Fitzgerald Revitalization Project through the Reimagining the Civic Commons grant via the Strategic Neighborhood Fund Initiative. This residential development is phase one of the investment in the Livernois-McNichols area. In phase two, residents in the Livernois-McNichols area can expect to see another $5 million investment from the city and Strategic Neighborhood Fund partners for commercial development.

The project, which is expected to break ground later this spring, will include:

Mayor Duggan said the project is a way to grow our neighborhoods and improve the quality of life for the many Detroiters who call this neighborhood home.

“This project is about creating opportunity and working together to strengthen our neighborhoods,” said Mayor Duggan. “Whether you’re a renter or homeowner or someone who just wants to live in this neighborhood, there’s a place for you in Fitzgerald. This is the kind of work we’ll be doing in neighborhoods across the city.”

Of the 323 parcels being developed by Fitz Forward, 115 have vacant homes that will be rehabilitated and eventually occupied by both existing residents and new families. These homes will be a mix of for sale and rental units, creating opportunity for existing residents to move from current rental properties to owning a rehabbed home or moving from an older rental property into a newly rehabbed property. Across the board, 20 percent of the housing will be affordable to resident making 80 percent or less of the area median income.

Another 16 parcels have blighted structures that will be demolished and replaced with landscaping. An additional 192 vacant lots will be cleaned and cleared. A combination of productive landscapes that grow food and other crops and low-maintenance landscapes like groves and flowering meadows will be installed.

The second land transfer will turn 50 vacant lots over to the City of Detroit’s Parks and Recreation Department, which will transform them into a two-acre public park and quarter-mile long greenway, with bikeways and walking paths, creating more connectivity throughout the neighborhood. The City will create a new park, named Ella Fitzgerald Park, in the center of the neighborhood to meet a need for greater recreation and civic space.

The land transfers will go before City Council on Tuesday, April 11. Pending approval, residents can expect to see immediate work from Fitz Forward. Within 120 days of council approval, the developer must secure all vacant structures and clear all vacant lots.

Starting this July, the City will begin work on the central park and greenway. More than 60 blighted houses in the in the neighborhood have already come down as part of the city’s regular demolition program, with two more blighted structures coming down in mid-April. Once the remaining houses are demolished, park and greenway construction will begin. Construction of the park and greenway will be completed by the end of 2017.

In fall 2017, Fitz Forward will begin rehabilitation of the 115 homes, demolition of the 16 blighted structures and installation of landscapes on the 192 vacant lots.

By fall 2019, just two years from the start of construction, the entire project must be completed, with rehabbed homes occupied by families.

The Fitzgerald Revitalization Project, an inclusive, community-driven effort, will provide a model plan for revitalizing Detroit neighborhoods with existing residents in mind. The project takes a holistic approach to vacant property by transforming all of the publicly owned vacant buildings and lots in the project area into community assets.

The plan for Fitzgerald revolves around preserving neighborhood character and increasing density without the need to construct a single new structure. By rehabilitating existing homes that are salvageable and creating new community spaces and productive landscapes on vacant lots, the project will create a first of its kind neighborhood that looks beautiful and feels complete and does not rely on infill housing to achieve this goal.

The Fitz Forward team is led by developers Century Partners and The Platform. Fitz Forward has been recommended to move forward to lead the housing rehab and transformation of the remaining vacant lots as the highest ranking team from the RFP process

Century Partners was co-founded by Andrew Colom and David Alade. The Platform’s co-principals are Peter Cummings and Dietrich Knoer.

Along with Century Partners and The Platform, Fitz Forward will have partners in landscape development, community engagement, construction and other specialties. Chase Cantrell from Building Community Value will be director of land based economy and lead the landscaping efforts plan to prepare vacant lots for local food production, as well as build and weave meadows, orchards and groves throughout the neighborhood. Green Collar Foods, will partner with the developer to pioneer a neighborhood based vertical agricultural innovation campus and leafy green indoor grow business. Rev. Gerald Harris of Evangelistic House of God will be director of community engagement and Reclaim Detroit will join Fitz Forward as the construction and rehab partner.

“We are honored to be chosen by the City of Detroit to launch a new paradigm for inclusive development within the city’s neighborhoods,” said Colom, of Century Partners. “We are also incredibly excited to work with the people of Detroit to show the world that development can be done differently, to showcase the Detroit way to do a comeback.”

Renderings of the Fitzgerald Revitalization Project can be found here for media use.

Documents
Fitz by the numbers.pdf