DETROIT – Many areas of the city have begun bursting with millions of yellow daffodils as part of a city effort to help beautify neighborhood parks and boulevards and city officials are encouraging residents to come check them out.

Over the past several years, the city’s General Services Department has planted a whopping 1.4 million daffodil bulbs that are now signaling the return of Spring in Detroit. An additional 600K bulbs have been planted on Belle Isle by Daffodils4Detroit.  This fall, 500,000 bulbs are expected to be planted during a brief, but optimal, 20-day window in October and November.

Planting the multitude of daffodils has been a passion project for Barry Burton, Project Manager, Landscape Design Unit for the City of Detroit, who was inspired by a sea of daffodils he witnessed years ago at the Royal Palace in London.  After unsuccessfully trying to get a daffodil planting program to take root in Chicago, Burton found fertile ground in Detroit, where Mayor Mike Duggan has been committed to shifting Detroit from a city of blight to one of beauty.

“Detroit is becoming a more beautiful city by the day, and at no time is it more visible than during these next two weeks when our daffodils are in full bloom,” said Burton. “By the end of this year, we will have 2.5 million bulbs in the ground and we’re just getting started.  We have the potential to become a major visitor attraction each spring.”

To help residents and visitors find these flowers, the city has created a “Daffodil map” to guide them to the key planting areas, which include city parks across the city and many of its stately boulevards.

“We’ve completely renovated more than 150 parks with beautiful new landscaping and amenities, so this will be a great chance for people to see our progress, as well as the daffodils,” said Brad Dick, Group Executive of Services & Infrastructure, who oversees many of the city’s beautification efforts. “It’s also a great opportunity to see some of the extraordinary homes in neighborhoods like Boston-Edison and the Aviation Subdivision that have beautiful boulevards with rivers of yellow daffodils”.

Some of the very best areas to view these beautiful displays are:

Link to daffodil photos and a high-resolution image of the map at the below link: 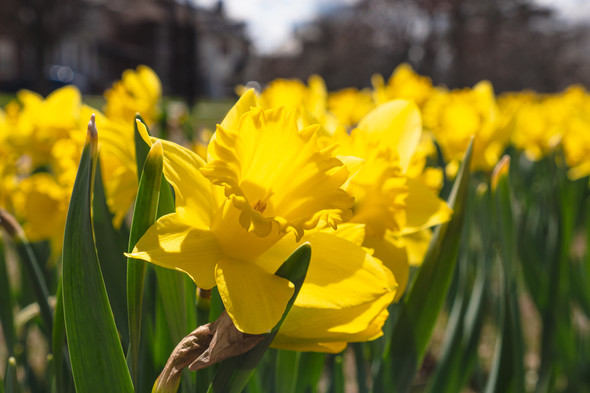