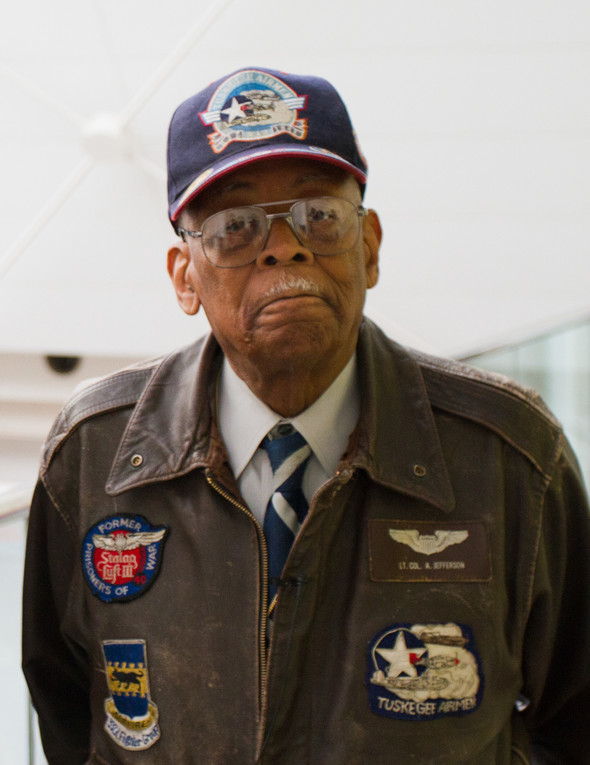 DETROIT _ The Office of Arts, Culture and Entrepreneurship (Detroit ACE) has issued an open call for an artist to create a statue honoring the late Lt. Col.  Alexander Jefferson, whose service as a Tuskegee Airmen helped win World War II. He died in June at age 100.

The statue, made possible by the generosity of Cynthia and Edsel B. Ford II on behalf of the Henry Ford II Fund, will anchor the new Jefferson Plaza at Rouge Park where Jefferson flew model airplanes as a boy.

The City dedicated the plaza site last November on Jefferson’s 100th birthday. He was feted by Sen. Debbie Stabenow, U.S. Rep. Rashida Tlaib, City of Detroit Historian Jamon Jordan and fellow Tuskegee Airmen. He also received the Key to the City from City Corporation Counsel Conrad Mallett. Detroit ACE has hired Michigan Recreational Construction to build the plaza. The sculpture is expected to be unveiled on Lt. Col. Jefferson’s 101st Birthday on November 15.

Jefferson’s flying unit, called Red Tails for the colors on their plane tails, escorted bombers into action in Europe – and lost so few planes that bombers requested them for flying runs. Jefferson and the Tuskegee Airmen overcame segregation and prejudice to become one of the most highly respected fighter groups of World War II. They set the stage for civil rights advocates to continue the struggle to end racial discrimination during the Civil Rights Movement.

Jefferson Field, which was named for the airman years ago, is currently used and maintained by the Detroit Aero Modelers who fly model airplanes there.

Detroit ACE, in partnership with the General Services Department (GSD) and the Department of Public Works, hopes to create a welcoming public space for youth and families to honor one of the most decorated soldiers from World War II and his enduring contributions to Detroit and America and inspire youth to become pilots.

The plaza project is among many Detroit ACE is undertaking to better connect artists with Detroit communities and to improve the look of neighborhoods across the city as part of Mayor Mike Duggan’s Blight to Beauty initiative.

Artists interested in applying should send a packet to Detroit [email protected] with the following required information:

The Artist Statement should list all needed materials, resume and answers to the following questions:

The application deadline is September 1. A selection committee comprising community members, veterans and members of the Detroit ACE team anticipates choosing an artist by Sept. 10. The statue must be completed by November 10.

Sept. 7             Two finalists will be introduced at a community session with park stakeholders, veterans and supporters.

The commission for the statue is $70,000, which includes fees, artist’s assistant costs, artist’s studio costs, materials and supplies and installation.

On August 12, 1944, three days before the invasion of southern France, he was shot down by ground fire while strafing radar stations on the coast. Captured by German troops and interned for nine months as a prisoner of war, he spent the first five months in Stalag Luft III, 80 miles east of Berlin.

On January 29, 1945, when the Russians started their offensive, the prisoners, American, British and French, were transferred to Stalag VIIA, Moosburg, about 20 miles north of Dachau. Liberated by American forces on the 29th of April 1945, Jefferson visited Dachau to witness the results of the atrocities committed by the Nazis.

Jefferson was discharged from active duty in 1947 and retired from the reserves in 1969 with the rank of Lieutenant Colonel. Following the war, he became an elementary science teacher in the Detroit Public Schools. He retired as an assistant principal in 1979. He was an active member of various church, educational and alumni organizations. He was a founder of the Detroit Chapter of the Tuskegee Airman (which is the original chapter) and was a member of the Tuskegee Airmen Speaker Bureau. As a Life Member of the Silver Falcon Association, he served on a voluntary basis as an Admissions Counselor for the U.S. Air Force Academy.

On October 14, 1995, Lt. Col. Jefferson was inducted into the Michigan Aviation Hall of Fame.