Mayor Mike Duggan announced today James E. White will be Interim Chief of Police of the Detroit Police Department when Chief Craig retires at the end of the month. White is a career police officer who rose through the ranks to become Assistant Chief of Police before he was selected by the Michigan Civil Rights Commission to lead the Department of Civil Rights.

Mayor Duggan met with several current and former DPD executives he was considering for the role before selecting White. “The level of talent within DPD, and that has come through DPD, is extraordinary and each of the individuals I met with are deeply respected and would make outstanding interim Chiefs,” said Mayor Duggan.  “However, James White has the depth and breadth of experience that I feel have prepared him to lead this department forward. He has my full support as well as the full support of every member of City Council and Board of Police Commissioners.”

White, a 24-year veteran at DPD was born and raised in Detroit, served as Assistant Chief since 2012 and in leadership positions for the majority of his tenure.   White led the Detroit Police Department’s efforts to be released from two decade-long federal consent agreements, which required the implementation of policies, training and processes to protect the constitutional rights of citizens DPD officers engage or detain.

A firm believer in departmental diversity and inclusion, White also established a Civilian Advisory Committee to help bridge the gap between civilians and sworn members within the department. He also worked to ensure that returning citizens had opportunities for employment within the Detroit Police Department in certain non-sworn capacities.

White, who is a state licensed mental health counselor, has stated his commitment to look after the wellbeing of officers on the force who face difficult challenges on a day-to-day basis processing crime scenes, dealing with the loss of children as well as other city residents and unspeakable violence in our community.

White is also passionate about developing crime fighting and intervention strategies to bring down the level of violence in our community.

“Having grown up in the City of Detroit and in the Detroit Police Department, I am deeply honored and humbled to have been appointed as Interim Chief of Police for the great city of Detroit,” White said. “I am returning to the Detroit Police Department after having spent the last 8 months serving the citizens of this state as Executive Director of the Michigan Department of Civil Rights, a position that has allowed me to work with the Michigan Civil Rights Commission on initiatives such as Equity in Education and Equity in Minority and Women-owned Businesses.”

“While I am leaving the Department of Civil Rights, my commitment to civil rights integrity, transparency, equity, and inclusion remains firm. These concepts will serve as guiding principles and help drive every crime-fighting strategy going forward,” White added.

“In the coming weeks, I will be assembling a team of tenured officers and executives to help with the transition. I look forward to working with the Mayor, city and community leaders, the Board of Police Commissioners, and the men and women of this great department in reducing crime while at the same time inspiring community support and confidence.”

Under the City Charter, the next step in finding a new permanent Chief of Police, will be for the Board of Police Commissioners to conduct a search and generate a list of candidates, from which the Mayor will interview and make his selection.  The Charter also states that the Chief of Police must first be confirmed by a majority vote of Detroit City Council.   Mayor Duggan said he hopes to have a new Chief selected and confirmed in the next 60-90 days.   White has indicated to the Mayor that he intends to also be a candidate to become the city’s permanent Chief.

The Board of Police Commissioners supports Mayor Duggan's selection of James E. White as Interim Chief of Police of the City of Detroit.

“Mayor Duggan’s appointment of Interim Police Chief James White ensures the department will continue to have very steady and capable leadership during the time that it takes the Board and the City to go through the Charter-mandated process for hiring a new police chief.

“Throughout his career, and especially during his years as Assistant Chief, Mr. White worked closely with Chief Craig and was involved in almost every aspect of police operations, policy, and administration. He also worked extensively with the Board, and we continued to work collaboratively after he became Director of the Michigan Department of Civil Rights. He clearly has the knowledge, experience, and leadership to step right in and serve the City, the Department, and the residents as interim police chief.

“We expect the timing of his selection will continue our momentum of keeping our City and residents safe and maintaining transparency and accountability in our police department. We are excited to welcome him back and know that he, the DPD Executive Team, and all sworn and civilian members will work together effectively to ensure the success of the Detroit Police Department during this time of transition."

White is a proud graduate of Wayne County Community College, where he earned an Associate of Arts Degree in General Studies.  He went on to earn a Baccalaureate Degree in Sociology from Wayne State University. He later earned a Master of Science in Counseling from Central Michigan University and became a licensed mental health counselor.  In 2018, White earned an MBA Certificate from the Wayne State University Leadership Academy, Mike Ilitch School of Business. 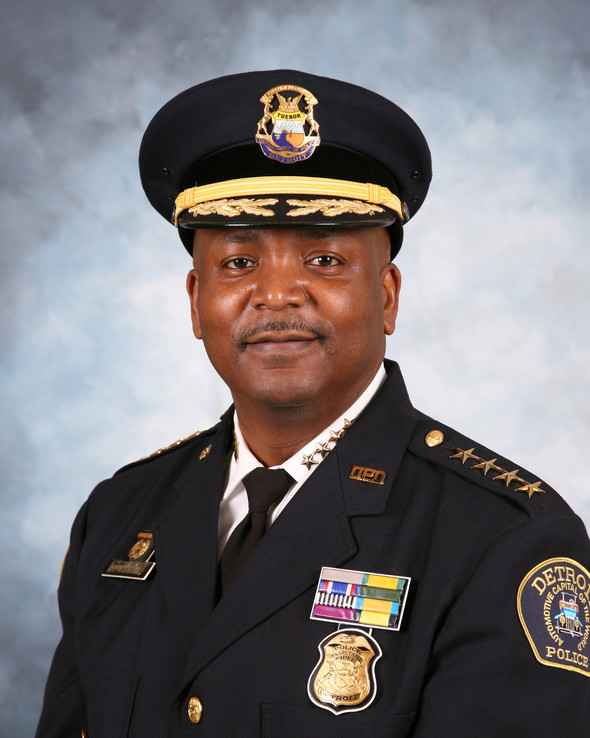