Mayor Mike Duggan (Detroit ACE) celebrated International Artist Day Monday by announcing the recipients of the inaugural Detroit ACE Honors. The Detroit ACE Honors, like Washington, D.C.’s Kennedy Center Honors, salute lifetime achievement and celebrate artists and arts patrons who have contributed 25 years or more of exceptional service to Detroit arts and culture. Each honoree will receive a Detroit ACE Medal of Excellence as part of the first Detroit ACE Honors in January. Future honorees will be recommended to the mayor by the Detroit Council of the Arts, whose members will be announced at that ceremony.

ELIZABETH “BETTY” BROOKS Board member of the Detroit Historical Society, Motown Museum, Detroit Jazz Festival, Detroit Institute of Arts, Charles H. Wright Museum of African American History, and the Michigan Opera Theatre. Chair of the 150th-anniversary celebration for the Detroit Public Library and the second annual Eastern Market Harvest Celebration; appointed member of the Board of Police Commissioners for the City of Detroit.

DAVID DICHIERA Founder of Michigan Opera Theatre and former President of Opera America; critically acclaimed composer of Four Sonnets (premiered at the Kennedy Center) and Cyrano (premiered at the Detroit Opera House, later presented by the Opera Company of Philadelphia and the Florida Grand Opera); recipient of the Opera Honors Award by the National Endowment for the Arts, the nation’s highest award for lifetime achievement in opera; Kresge Eminent Artist (2013).

ROBERT S. DUNCANSON Prolific painter known for sweeping, large-scale landscapes; established a studio in Detroit in 1849, where he would become the most accomplished African American painter of the 1850s and 1860s.; considered to be the first African American artist to gain international recognition and proclaimed by the American media as “the best landscape painter in the West.”

LEROY FOSTER Fine portrait painter and muralist known for public commissions, including “The Life and Times of Frederick Douglass” for the Frederick Douglass Branch of the Detroit Public Library, “Kaleidoscope” for the lobby of Southwest Detroit Hospital and “Renaissance City,” for the old Cass Technical High School Building; graduate of Cass Technical High School, the Detroit Society of Arts and Crafts School (now the College of Creative Studies), L’Academie de la Grand Chaumeire in Paris and Heatherly School of Art in London; founded the Contemporary Studio with Charles McGee, Harold Neal and Henri Umbaji King.

TYREE GUYTON Neo-expressionist artist and creator of the internationally renowned Heidelberg Project; studied at the College for Creative Studies and awarded an honorary Doctorate of Fine Art; featured in the Detroit Institute of Art, the University of Michigan Museum of Art and the Studio Museum of Harlem as well as in the Emmy Award-Winning Documentary Come Unto Me, the Faces of Tyree Guyton; Kresge Visual Arts Fellow (2009).

VERA HEIDELBERG Co-chair of the first Classical Roots Celebration, an annual concert sponsored by the Detroit Symphony Orchestra recognizing African American contributions to classical music; charter member of the Greater Wayne County Chapter of The Links, a women’s organization that seeks to enhance quality of life in African American communities; chairwoman of the Women’s Committee of the United Negro College Fund; graduate of the Detroit Institute of Technology and Wayne State University.

DUDLEY RANDALL Prolific poet and the City of Detroit’s first Poet Laureate; called “the Father of the Black Poetry Movement” by Black Enterprise Magazine; founder of Broadside Press, author of A Litany of Friends: New and Selected Poems and More to Remember: Poems of Four Decades and editor of The Black Poets and For Malcom: Poems on the Life and Death of Malcolm X.

MARILYN WHEATON Longtime Director of the City of Detroit’s Cultural Affairs Department, Concerned Citizens for the Arts in Michigan and the Marshall M. Fredericks Sculpture Museum on the Saginaw Valley State University campus; helped orchestrate art for the Detroit Tricentennial Celebration, including the International Memorial to the Underground Railroad on the Detroit riverfront; worked to make Detroit a cultural destination through raising funds for art programs in the city.

DEBRA WHITE-HUNT Co-Founder and Artistic Director of the Detroit-Windsor Dance Academy; choreographer for more than 50 ballets and director of more than 100 dance concerts; commissioned to create her works on stage, television, film, and video; recipient of numerous national and local awards for her excellence in the arts and education; Kresge Arts Fellow (2020).

THE KRESGE FOUNDATION Each year, the ACE Awards will salute philanthropy, which has elevated and sustained Detroit arts and culture for decades. Our first recipient is the Kresge Foundation, which since 2008, has awarded more than $6.7 million through Kresge Arts in Detroit's Kresge Eminent Artist Awards, Kresge Artist Fellowships and Gilda Awards. Kresge is receiving special recognition this year for sustaining the Office of Arts, Culture, and Entrepreneurship through its first two years, providing vital operational support as it joins the mayor's mission to place focus on the City's creative arts industry, which is one of the best in the nation. Detroit ACE will be proud in the next few weeks to announce further support it is receiving from additional philanthropic heroes but offers a special thanks to Kresge for being there in the beginning, the middle, and always.

CITY OF DETROIT HISTORIAN The mayor also announced the appointment of the CITY OF DETROIT HISTORIAN, an honorary position that is both ceremonial and educational and is given to an individual who has a demonstrated knowledge of Detroit’s cultural history from local, regional and international perspectives. Our Historian was selected based on his commitment to and passion for sharing information about the diverse ethnic groups and historical processes that have contributed to Detroit’s cultural development. The Detroit Historian will promote, research, preserve, interpret and disseminate information about the City’s history. He is JAMON JORDAN.

Jamon is an educator and historian who is the founder of The Black Scroll Network, History & Tours. After years of leading tours for his students, Jordan saw the need for people to have a personal experience with the history of African Americans and Black people throughout the Diaspora. This is especially true in Detroit, MI, where the company was founded and is based. Detroit has a rich history, from enslaved Africans and Indigenous people to being a major station on the Underground Railroad, which Black people used to escape enslavement, to a Black economic and residential center, known as Black Bottom & Paradise Valley to NUMEROUS events, leaders and figures in history.

Riley also announced that Detroit ACE will join the City’s Procurement Department in sponsoring a Vendor Registration Fair to increase opportunities for artists to work on City projects. Upon registration, artists will receive notices of art projects across City departments. The date and location of the Vendor Fair will be determined by the number of artists who are interested in participating and getting more work. Opportunity is indeed rising in Detroit. Visit detroitmi.gov/ace beginning Tuesday, October 26 to sign up.

For more information, contact Rochelle Riley, Director of Arts and Culture at [email protected] or 313 480 5265 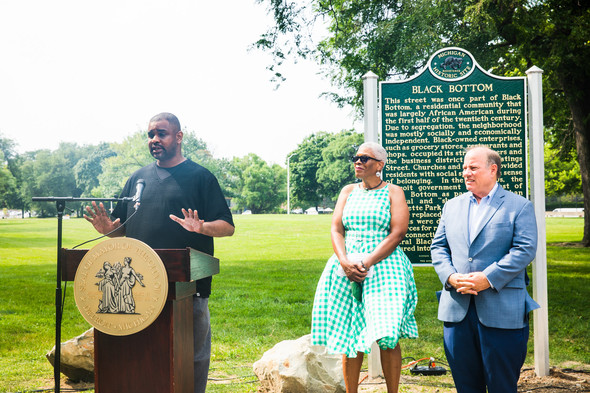