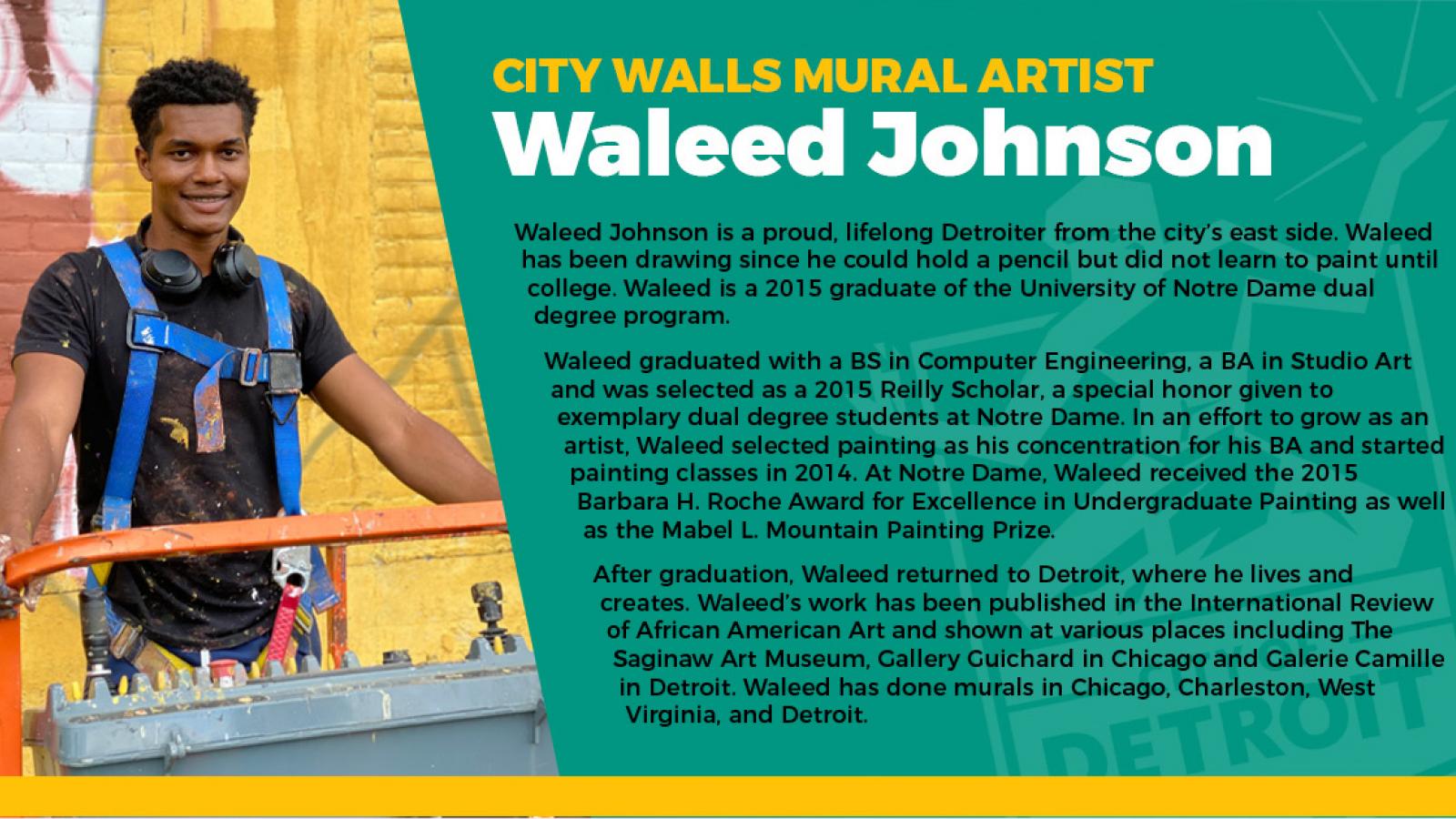 DETROIT – Today, Detroit artist Waleed Johnson began putting the finishing touches on a stunning new six-story mural on the side of a storage building at Mack and Van Dyke on the city’s east side. Johnson’s creation, “The Spirit,” is the 100th mural to adorn the city as part of its four-year-old City Walls initiative.

Initially launched in 2017 as a pilot to replace graffiti-covered viaducts and vacant building walls with beautiful murals, City Walls has grown into a full-scale beautification program. The program's goals are to highlight the values and identity of the communities where artwork is created, empower Detroit artists, and provide a positive cost-benefit to the public via art versus the cost of blight remediation.

In a nod to the city’s Spirit of Detroit statue, Johnson’s mural depicts an African American woman adorned in the City of Detroit flag and holding the gold sun and spires as Marshall Fredrick’s statue. “We have turned a corner in our city where we no longer just think about getting rid of blight. Now our focus is on creating a city of beauty, and the City Walls program has become a big part of that,” said Mayor Mike Duggan. “City Walls simple idea beautifully executed on a large scale. Many Detroiters probably enjoy these murals without realizing they’ve been commissioned by the city.”

City Walls artists have painted over graffitied viaducts, worked with neighborhoods to create art on once-blighted buildings, and created opportunities for local artists through open calls for murals on recreation centers and other public spaces. City Walls has also boosted the local art economy by providing artists with funding and resources. As a part of the Blight Abatement Artist Residency Program, each artist receives a $15,000 stipend and $10,000 in supplies to complete their art for the season. This season 15 new murals will be established. "Since 2017 I've been so fortunate to collaborate with so many of Detroit's talented artists, community stakeholders, and civic leaders. It's also fitting as we emerge from this pandemic with a renewed sense of optimism with this renewed rendering of The Spirit of Detroit,” said Zack Meers, project manager, City Walls. “I could not be happier and hope to produce many more projects highlighting our homegrown talent by transforming a crucially important part of our public spaces— the city wall."

Waleed Johnson is a proud, lifelong Detroiter from the city’s east side. Waleed has been drawing since he could hold a pencil but did not learn to paint until college. He was inspired to develop this piece over four years ago after taking a portrait of his friend Rosie. Waleed wanted to create something that was an uplifting and inspiring celebration of blackness. After a discussion with his fiancé, he centered on a concept that envisions the Spirit of Detroit as a black woman.

“The contributions of black women to this city both in the past and present are numerous, but few monuments to them exist, he said. “Furthermore, the contributions of everyday Detroiters who aren’t in the public spotlight often are overlooked. Being raised by a single, black woman I saw these contributions firsthand, and I observed how so many black women in the communities in which I lived kept the city alive.”

"The development of this piece began just over four years ago, but it encompasses all the themes past and present in my artwork. I staged this photo of my friend, Rosie, in our mutual friend's living room in 2017. I wanted to create an image that was an uplifting and inspiring celebration of blackness. The mural project I originally created the image for fell through but I always knew I would use this image when the time was right. When I reached out to the building owner about the possibility of painting this wall immediately this image came to my mind. I knew that a hopeful image like this on such a large scale would have the potential to make a big impact. I had the starting point, but I was still developing the story that I wanted to tell. I began working on a sketch based on the image and my fiancée saw it and suggested that her headwrap be the flag of Detroit. That moment led me to discover the story I was searching for. I changed the headwrap to be the flag of Detroit and I started conceptualizing what it would look like to reimagine The Spirit of Detroit as a black woman. The contributions of black women to this city in both the past and present are numerous, but few monuments to them exist. Furthermore, the contributions of everyday Detroiters who aren’t in the public spotlight often are overlooked. Being raised by a single, black woman I saw these contributions firsthand, and I observed how so many black women in the communities in which I lived kept the city alive," says Johnson.

"My hope is that anyone who drives by will see this image as uplifting. I also hope that the black community of Detroit, in particular, will see themselves in the image and be reminded that they belong here. Rarely are black people, or people of color in general, depicted in such a monumental way unless they are famous. As a result, oftentimes people are befuddled when they look at my work and rattle off names of famous people only to have me tell them that the person depicted is not only not one of those people named but is not famous at all. I want the community to get used to seeing people that look like them represented in this way. This mural combines that idea with another theme that has been in my work since the beginning: Detroit. Everybody who knows me knows that Detroit is my home and is a part of who I am. For years I’ve wanted to do something to celebrate the city that made me who I am. The very first portrait painting I ever completed was an image of me wearing a Detroit vs Everybody hoodie back in 2014, and now the largest painting I’ve ever completed is also about my home."

For more information on open calls and the next season of Blight Abatement Artist in Residence program, visit www.detroitmi.gov/citywalls