Beyond the addition of much-needed affordable housing, the transformation of Transfiguration Place Apartments also is notable because it was borne from a partnership between the City of Detroit and the Archdiocese of Detroit to put historic but underutilized and vacant Detroit buildings back into use. Area residents were part of the RFP selection committee, and the developer held multiple community meetings during the predevelopment process to ensure their feedback would be incorporated into the building.

“I am proud of this project, as it is an example of how the City, the community and other partners can come together to find solutions for the benefit of our neighborhoods,” Mayor Duggan said. “This administration will continue to find new ways to bring new investment into our neighborhoods, and I hope that it shows the potential for what can be done for the many other historic but unused schools and other buildings across Detroit, especially in terms of creating more quality affordable housing.” 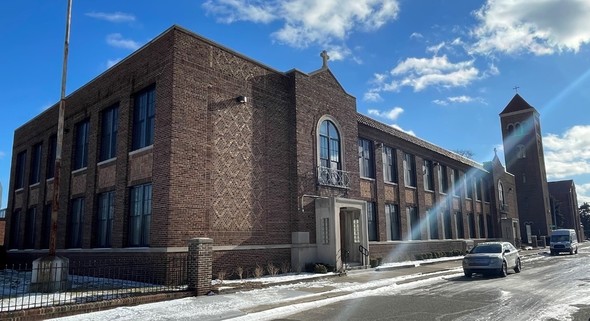 The historic Transfiguration School is now home to 19 quality affordable housing units, and no resident will pay more than 30% of their income in rent. Photo: Cinnaire Solutions

The opening of the building at 13300 Syracuse comes almost exactly one year after work on the conversion of the 21,500-square-foot former school was announced. There are 17 one-bedroom apartments and two two-bedrooms. Thanks to project-based vouchers (PBVs) through the Detroit Housing Commission, residents with extremely low incomes of 0% to 50% AMI will be able to call Transfiguration Place home, and no resident will pay more than 30% of their income in rent, plus utilities. The affordability is guaranteed for 45 years.

“Transfiguration Place Apartments exemplifies the meaningful impact that can be accomplished when partners come together to advance the social and economic well-being for Detroit families,” said Christopher Laurent, Cinnaire Solutions president. “Access to affordable housing is a critical component of healthy communities, and our team is proud to be a part of this project that represents the best of what Detroit has to offer – partners joining forces to preserve historic structures while creating opportunities to empower families and lift up neighborhoods.”

Added City Councilman Scott Benson, whose district includes the Campau/Banglatown area: "I’d like to congratulate the development team, the City and the community for their vision on this project. It shows what happens when we think creatively about how we can address the need for affordable housing and the revitalization of our neighborhoods. I hope this redevelopment is the first of many like it to come.”

That sentiment was echoed by Archdiocesan Director of Properties Michael McInerney: “The Transfiguration School served the community for nearly a century, and now, as affordable housing, it will continue that mission in a new way. This project shows the potential for reusing our historic assets in a way that leads to a better, stronger and more equitable Detroit.”

The project highlights what is possible for many of the former schools located in neighborhoods across the city, said Joseph Heaphy, president of Ethos Development Partners, which has worked on transforming a number of historic properties across the city into affordable housing.

“Ethos and Cinnaire Solutions are proud to have helped bring affordable housing and new life to this important piece of this tremendous neighborhood,” Heaphy said. “Transfiguration has long served as an anchor of this neighborhood, and now it will be again. We believe this project will serve as a model and a template for what can be done and the potential that lies in communities across Detroit.”

The two-story school building was built in 1926 and also served as the congregation’s church until 1950, when the adjacent church opened next door. The parish school closed in 2005, but was leased to a charter school until about 2014. The school is the oldest surviving piece of a six-building complex that was added to the National Register of Historic Places in 2019.

Following the partnership between the City and Archdiocese, the mayor tasked HRD in 2017 with marketing the building and finding a developer. Based on the developers’ work with projects such as the conversion of the NSO Bell Building on Oakman Boulevard, the City chose Ethos and Cinnaire’s proposal. The result is units that offer unique conversions of former classroom space into living units and feature an abundance of natural light at a fraction of the price found in many newer, market-rate units in Detroit.

“The Transfiguration Place Apartments will provide much-needed affordable housing in Campau/Banglatown and offer Detroiters a beautiful place to call home,” said Julie Schneider, director of HRD. “Our department is committed to ensuring that development in our city creates equity and opportunity and that our city’s neighborhoods are welcoming, inclusive places for all. We look forward to continuing to fully support all developers who share that mission with us.”

The project is located in one of Mayor Mike Duggan’s Strategic Neighborhood Fund areas. Though not an SNF project itself, the Transfiguration transformation shows how the initiative is spurring independent development in the targeted neighborhoods.

As part of the administration’s commitment to the SNF neighborhood, the City has seven vacant houses on Syracuse Street that are eyesores and cannot be saved under contract for demolition and five more in the pipeline. One block west, on Sparling Street, lie another house under contract and another in the pipeline. The SNF also has a major renovation to Jayne Field a few blocks away wrapping up, as well as a streetscape overhaul on Conant Street, not far to the west.