Mayor Mike Duggan and Detroit residents gathered today to celebrate renovations to Zussman Park on the city’s west side in the Russell Woods neighborhood. The project’s completion is the latest milestone in the Mayor’s Strategic Neighborhood Fund initiative, which focuses on improving the quality of life for residents through better parks, commercial corridors and neighborhood stabilization.

The City of Detroit Parks & Recreation Division and Planning & Development Department led community engagement meetings to ensure that the park, located at Davison and Dexter, reflected its neighborhood. Residents wanted not only more beautiful open spaces but also a park that encouraged active play. The $850,000 in upgrades to Zussman Park include a walking loop, new playground, state-of-the-art outdoor fitness zone, drinking fountain, new picnic area with shelters and outdoor grills, six-hoop basketball court, newly planted trees and public art. Funding for the renovation was supported in part by $600,000 from the Strategic Neighborhood Fund and $250,000 from City bond funds.

“This is an incredible transformation, and Zussman Park is once again a place of pride in this neighborhood,” Mayor Duggan said. “The Strategic Neighborhood Fund is part of a citywide effort that is making our neighborhoods better places to call home and to raise a family, and quality parks for our children are a key piece of that goal.”

“The Russell Woods and Nardin Park communities are truly some of the gems of our city, and they deserve a world-class park – and now they have it,” Ayers said. “I applaud both the City’sefforts in bringing District 7 such a quality park but also in ensuring that residents’ voice were heard and reflected in the renovation of this great community asset.”

Among the highlights of the Zussman Park renovation is a new mural created by renowned artist Mario Moore, whose family still lives in the neighborhood. It depicts some of the famous Detroiters who once lived near the park, as well as nods to beloved traditions such as the Russell Woods parade. Moore is the grandson of Helen Moore, a longtime neighborhood resident and activist who has fought to improve her community and education for Black children for more than six decades.

“It was really important for me as an artist from Detroit to listen to the community about what they wanted for the mural in their neighborhood,” Moore said. “I took that information and shaped it into a composition that focused on the past, which featured famous residents who lived in the area, like singers Diana Ross and Dinah Washington and important figures in the community like poet Dudley Randall. The interior window represents the future of the neighborhood with connections to the past. I hope that this mural will be cherished by the community and Detroit as a whole.”

In 2013, Zussman Park was slated to be closed along with 48 other city parks. Joshua Smith, 10 years old at the time, raised $3,600 selling lemonade and popcorn to save the park. His efforts paid off, and the playground equipment manufacturer Playworld donated a new play structure. The community wanted the equipment to be restored and remain in the park, and it now sits adjacent to the mural.

“The renovations at Zussman Park are remarkable and community-driven,” said Brad Dick, group executive, Services & Infrastructure for the City of Detroit. “The City is proud to provide a safe, engaging space for the community to enjoy.” 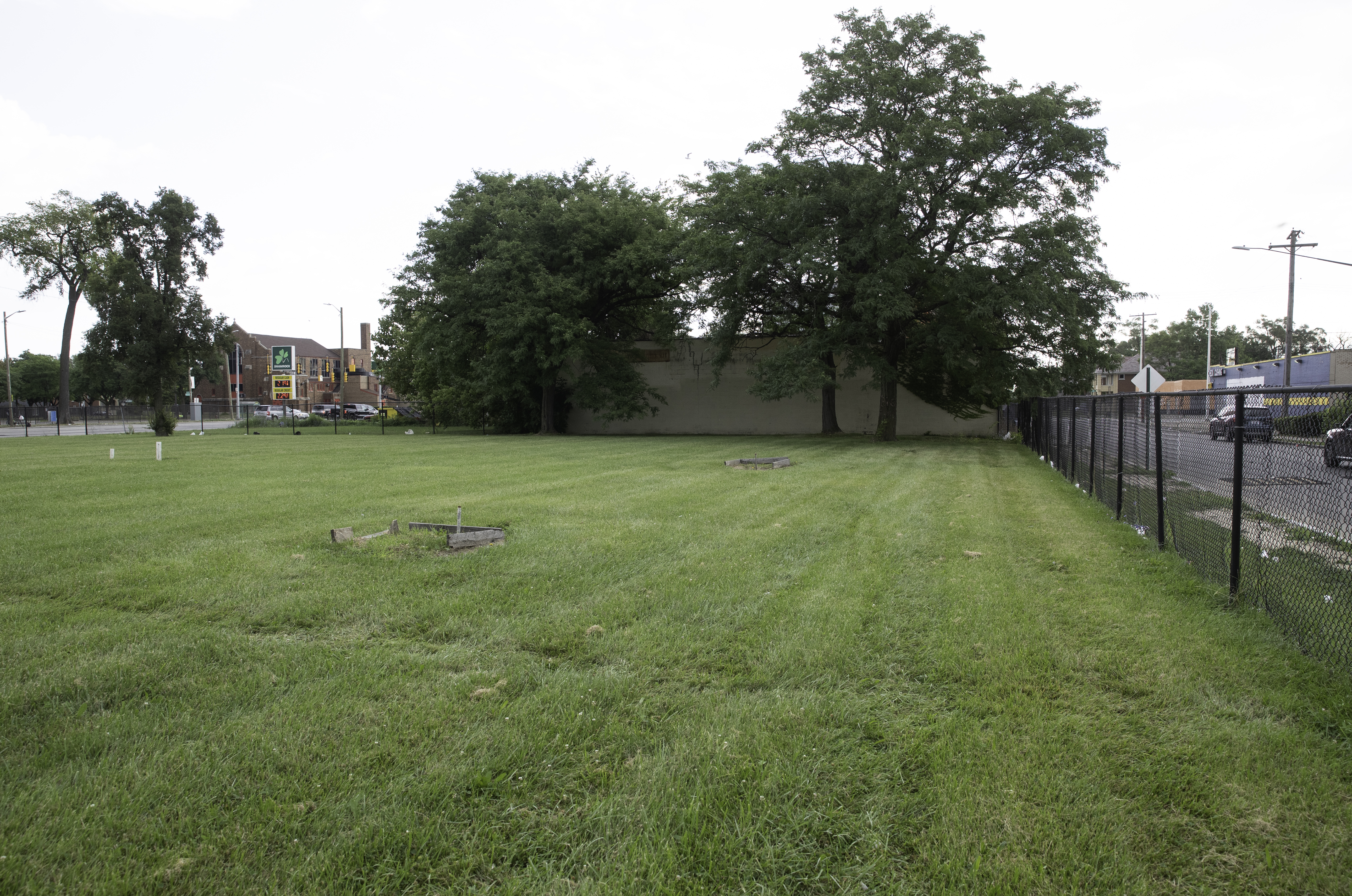 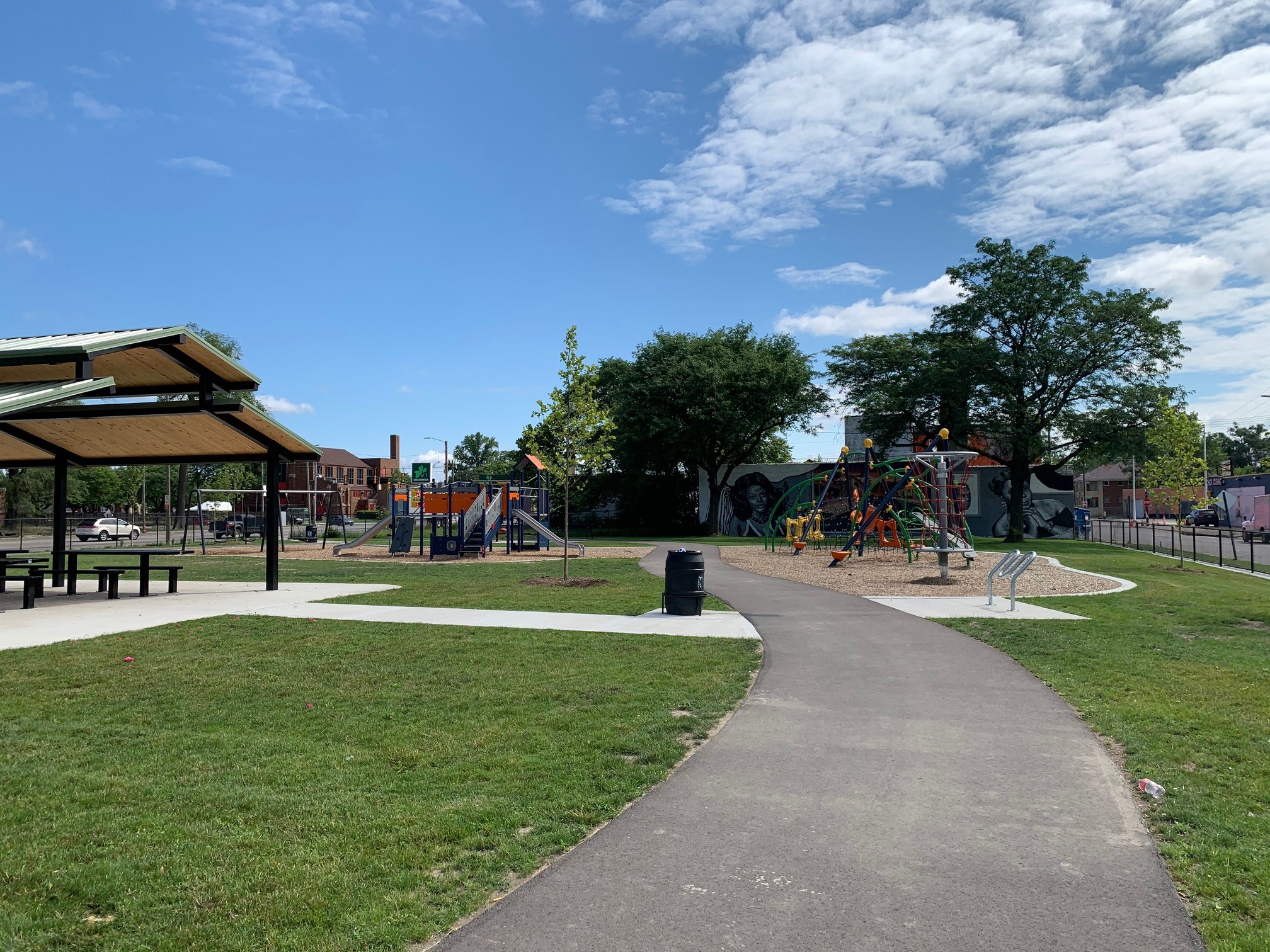 The SNF plan for Russell Woods and Nardin Park was presented to the community at the end of 2018. It represents a vision of a healthy and beautiful Detroit, built on inclusionary growth, economic opportunity, and an atmosphere of trust and cooperation between residents and the City. The work also has built upon momentum already happening in the area.

All the neighborhood SNF plans were built upon in-depth feedback from the community, gathered from community meetings, weekly Zoom calls, canvassing thousands of households, and survey responses received from hundreds of residents. The vision is focused on ensuring all residents who have stayed can take advantage of the improvements, while welcoming newcomers to the neighborhood. It is also an example of how targeted public investment can help jump-start private investment in Detroit’s neighborhoods.

“We have seen how commercial corridor investments do better where the City has invested in infrastructure that gets the community engaged and active in their neighborhood,” said Katy Trudeau, acting director of the Planning & Development Department. “By having the community involved and engaged in determining where those areas of investment should be, it sets up the SNF neighborhood plans for success and support from residents.” 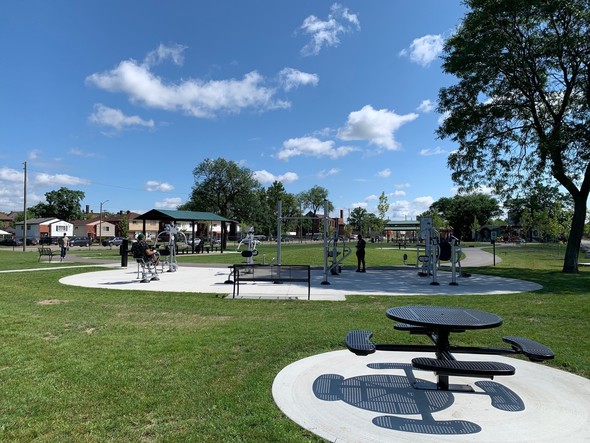 The Russell Woods-Nardin Park plan has a number of key initiatives:

A streetscape overhaul along Dexter between Fullerton and Davison will start next spring. Key aspects of this initiative include reducing number of lanes, adding protected bike lanes and improving bus shelters along this key Detroit Department of Transportation route. This investment will help spur economic development along Dexter.