For decades, Detroiters have enjoyed concerts and events at the Michigan State Fairgrounds bandshell, and thanks to the work of Councilmember Roy McCalister and Mayor Mike Duggan the regional gem will be saved from demolition as the site is converted into a $400 million distribution center expected to bring 1,200 jobs to the city.

During his State of the City Address on Tuesday, Mayor Duggan announced the preservation of the historic bandshell with the goal of relocating it to another site in District 2 where residents could reprogram it for public use. The initiative was supported by Councilmember Roy McCalister Jr. and preservationists from across the region.

“Since the announcement that Amazon would utilize four million square feet at the Fairgrounds, we’ve been looking at how to preserve historic buildings on the site,” said McCalister. “We’re excited about preserving the history of the fairgrounds in this way.”

After hearing the concerns of District 2 residents, Councilmember Roy McCalister approached the Mayor with the proposal to preserve the bandshell and move it to a neighboring park. The bandshell has been in disrepair on the long abandoned site since 2009. The proposed new site for the bands shell is Palmer Park.

“By preserving the bandshell it saves a piece of Detroit history,” said Rochelle Lento, president of People For Palmer Park. “This is a great opportunity to continue the redevelopment and activation of Palmer Park that the City and People for Palmer Park have collaborated on for the past ten years, and to resurrect a positive attribute for the surrounding communities in an exciting way.”

Residents will be engaged to help determine bandshells next chapter

Councilmember McCalister and the Department of Neighborhoods will engage residents and community organizations on the bandshell move and plan to incorporate the shell into the park design. Community members will have an opportunity to make recommendations on parking, lighting, and a promenade entrance.  Once a final location and cost is determined, the City will work with partners to manage fees associated with the move.

“Amazon is proud to partner with the City of Detroit to ensure the historic Michigan State Fairgrounds bandshell is preserved. This iconic venue is an important piece of the community’s music history and we are excited to identify ways to give back locally that will cultivate an appreciation for the arts among the city’s next generation,” said Ryan Wilson, Amazon Spokesperson.

"I really appreciate the City of Detroit's enhancement of the cultural amenities in my neighborhood.  My family looks forward to warm summer evenings in Palmer Park celebrating Detroit music. I'm sure the bandshell will be renovated to high standards and complement the ongoing renovations of this precious Detroit park jewel,” said Buzz Thomas, a resident of the community near Palmer Park’s Detroit Golf Club.

Preserving the bandshell will accompany the more than $3.5-million investments at Palmer Park within the past five years, which improvements including new tennis courts, playgrounds, lighting and the rehabilitation of Lake St. Francis. 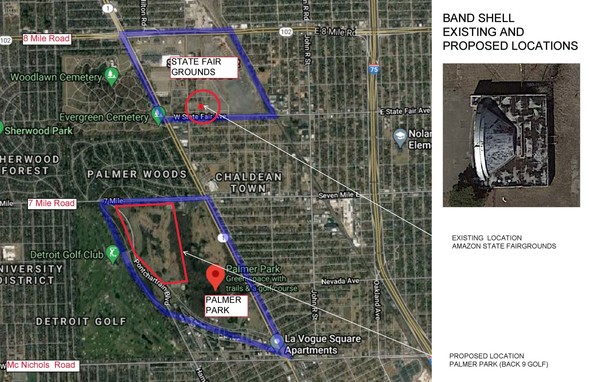