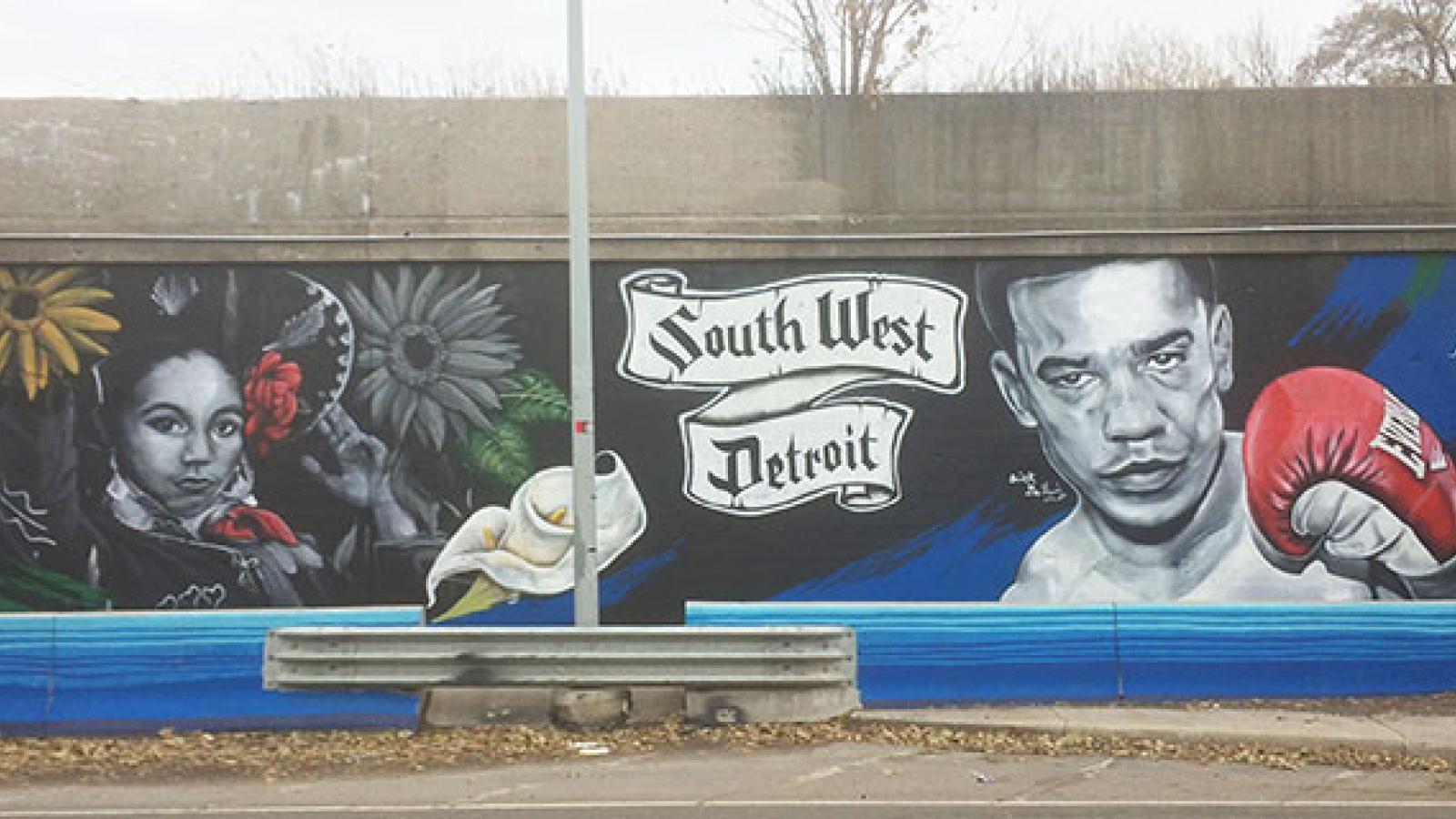 Beautiful murals that depict colorful scenery and designs, Mexican heritage and other themes have sprouted up in several areas of the city as part of a City of Detroit initiative designed to address sites frequented by illegal graffiti taggers.

City Walls was launched in 2017 to allow property owners who have received a blight violation ticket associated with graffiti to commission a mural to be painted to satisfy the remediation portion of the ticket. The goal of the program is to beautify the community by creating attractive pieces of public art that illegal taggers will appreciate and respect.

The program also serves to highlight the values and the identity of the communities where artwork is being created, empower Detroit artists, and to provide a positive cost benefit to the public through art versus the cost of blight removal.

“Murals are a powerful tool in the fight against blight. These murals serve as a deterrent to vandalism and can be used not only as a tool to encourage economic growth and community development but also as way to empower emerging artists.” Zachary Meers, General Services Department, City walls Manager.

To date, 19 murals have been completed, mostly in southwest Detroit, but also in Northend, West Village and other areas.  A map of the murals with a gallery of images can be found at www.detroitmi.gov/citywalls.   The City has set a target of 60 murals to be painted by 25 Detroit artists across the city.

Artists are selected with the help of artist 1xRun, who evaluates portfolios and past examples of public artwork. While many of the artists are residents of Detroit, the selection of artists is not confined to the city.   Artists may also be commissioned by business or property owners who would like to take advantage of the program.

2018 Season
The City of Detroit teamed up with 1xRun to paint 3 murals on 3 viaducts in Detroit. The viaducts were chosen based on community input and current planning studies. Artists Jesse Kassel, Olyami Dabls and Sydney James were also chosen based on their relationship to the community. The #1 goal of this project is to insure the murals reflect and celebrate the values and identity of the community where the viaducts are located.

2019 Season
The City of Detroit partnered with 1xRun to curate the second season of our municipal street art program, the Blight Abatement Artist Residency Program (BAARP). The City Walls program and 1xRun curated the selection of three Detroit Artists for this sophomore cycle. Focusing on the hardest hit walls these artists will work with the Blight Abatement team at the General Services Department over the course of 5 months to paint murals in and around the City of Detroit.

2017 Season
The City of Detroit partnered with the Southwest Detroit Business Association and the Inner state Gallery in Eastern Market to curate the first ever municipal street art program, the Blight Abatement Artist Residency Program (BAARP). Roula David curated the selection of three Detroit Artists for this inaugural cycle.  . They are Phillip Simpson, Louise Chen and Bevan.

Focusing on the hardest hit walls these artists will work with the Blight Abatement team at General Services Detroit over the course of 8 weeks to paint murals in and around the City of Detroit.

After renovating 40 neighborhood parks the General Services Department and City Walls program in partnership with Summer in the City are embarking on a mission to pair 7 established Detroit mural artists with the extensive community engagement and volunteer engagement of Summer in the City to paint 7 murals adjacent to parks that were recently renovated. For seven weeks in the summer the murals will be painted in 7 districts culminating with 7 of the classic Summer in the City BBQ’s on Friday afternoon with the goal of engaging residents and artists.

Hand painted signs are such a large part of the rich entrepreneurial spirit of the City of Detroit that The City of Detroit’s General Services Department has partnered with the Detroit Economic Growth Corporation to launch a new program called #AlwaysHandPaint. In cooperation with the Motor City Re-Store program and 1xRun three local artists who specialize in Hand Painted Signs will complete a 5 month residency where eligible businesses will be paired with artists to develop and paint new hand painted signage on the emerging and established businesses who qualify for the program.

Building Owners can request a mural

Any building owner that would would like to have a mural painted on your wall or have an artist that you have selected to complete an artwork, contact the City of Detroit at [email protected] or call 313 628-2363 and the project will be registered with the City of Detroit Mural Registry. If you have any questions or would like more information please visit our website: www.detroitmi.gov/citywalls, you will also find a map of murals and their artists and the link to our registry.