Today, the City of Detroit announced efforts to unify Roosevelt Park making it safer for residents and uninterrupted by vehicle traffic. On September 7, the city will begin key improvements to the area which sits in the heart of Southwest Detroit’s Hubbard-Richard and Corktown Neighborhoods. The park is most well-known as the greenspace next to the iconic Michigan Central Station.

“As a result of thorough community engagement we’re glad to begin the work of unifying Roosevelt Park and continuing to get feedback from residents on their vision for the new park,” said Brad Dick, Group Executive, Services & Infrastructure, City of Detroit.

The City received feedback from neighboring residents at the Roosevelt Park Community Engagement Festival last weekend and through a survey available online at detroitmi.gov/rooseveltpark. The survey will close on October 31.

“Roosevelt Park is just another example of the City of Detroit Department of Public Works (DPW) collaborating with other City departments to beautify and make safe our city resources for residents to enjoy,” said Dayo Akinyemi, DPW Deputy Director. “Our mission is to partner with everyone including the residents to ensure we maximize placemaking opportunities for our citizens.”

Roosevelt Park is currently bisected by Vernor and a small section of 15th Street. Results from the Greater Corktown Neighborhood Planning Framework initiated in 2019 recommended a single unified park space. This park unification process will permanently close the existing section of Vernor that splits the park and reroute it.16th Street from Michigan Avenue to Vernor will be redesignated as Vernor Highway, and will connect residents to the city’s vibrant Mexicantown neighborhood.

Mexicantown Restaurant owner Bob DiMattia says, “After being in business for 40 years, he’s excited for this new development in the city and its potential to open up access to all of the diverse neighborhoods in this area.”

Business owners were also critical to this engagement and want the community to know that their businesses will remain open during this time. A map can found here.

Ford is also working to improve this neighborhood and the city with their rehabilitation of Michigan Central Station. As a part of that effort, Ford is rebuilding the viaduct which will result in temporary road closures through October of this year. The goal of these projects is to improve Michigan Central Station and Roosevelt Park making them assets for the community. 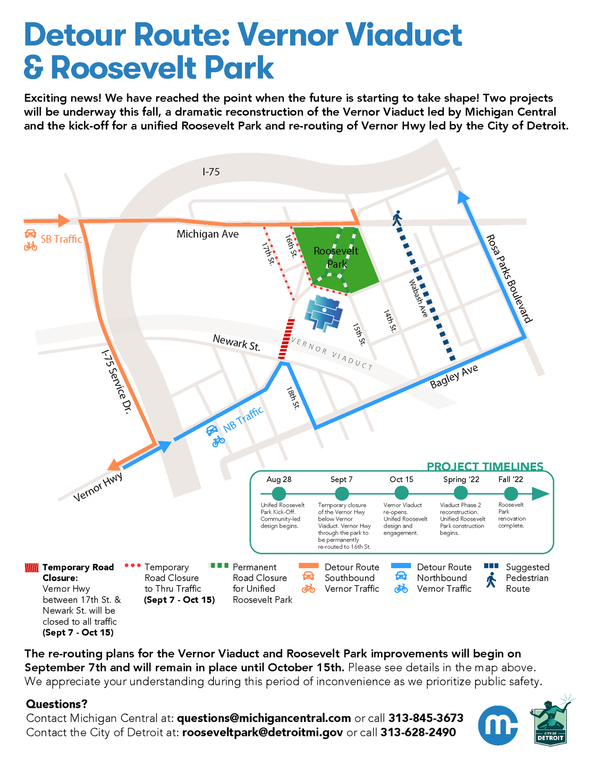