The City of Detroit has begun its road improvement program for the 2021 season. City workers and contractors will work throughout the season to install 4,500 speed humps in residential neighborhoods, as well as repave 65 miles of major roads and residential side streets.

This year, the city will install 4,500 speed humps across residential neighborhoods. The speed hump program first launched as a pilot in 2018, consisted of installing speed humps along a small number of residential side streets among each of the seven City Council Districts with the intention of soliciting resident feedback. Response has been so favorable, the city has responded by increasing the size of the program each year.

The speed humps are one part of the city’s traffic calming efforts to increase overall neighborhood safety and slow down motorists in those areas with high pedestrian traffic. 2021 speed hump locations were selected based on the following criteria:

Residents can visit detroitmi.gov/dpw to view a map of the 2021 speed hump locations. Work is expected to be completed by December 2021.

This year, work crews will resurface 25 miles of major roads and 40 miles of local roads. Work this year also will include construction on four separate streetscape projects that have been designed to beautify and enhance those commercial corridors.

“This administration remains committed to providing jobs for Detroit residents. These road construction contracts will create additional opportunities for our citizens, while providing needed repairs to our infrastructure,” said DPW director Ron Brundidge.

Some of the major thoroughfares planned for improvements this year include segments of Cadillac, Dickerson, E. Grand Blvd., Kelly, Mack, Southfield Service Dive, and Wyoming. Work is already underway on some projects and expected to be completed by December.

In addition to the resurfacing of 65 miles of roads, the city will revitalize four commercial corridors this year, which will include the addition of new wider sidewalks for café seating, landscaping, improved lighting, separated bike paths, as well as the roadway receiving new pavement. Those locations are:

Funding for these projects will come from a combination of federal and state transportation funds.

For a complete list of planned road repairs or any additional information, visit the City’s website at http://www.detroitmi.gov/DPW. 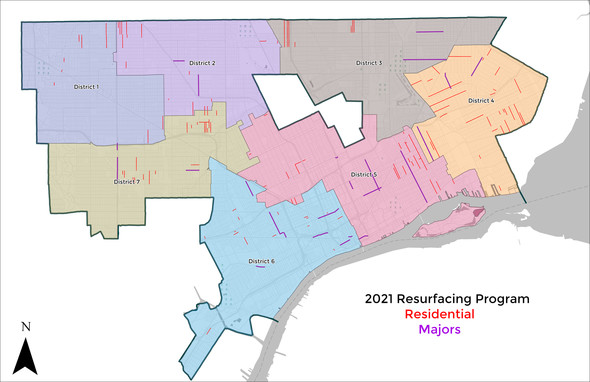