The Historic Designation Advisory Board (HDAB) advises City Council on all matters regarding historic preservation to protect the historic, cultural, architectural, and archaeological resources that make Detroit unique. HDAB promotes preservation through the creation of local historic districts and design guideline ordinances and also serves as a general resource to the community.

The Historic Designation Advisory Board has nine members, who are residents of Detroit, and two ex officio members as represented by the Director of the City Planning Commission and the Director of the Planning and Development Department. Two ad hoc members are appointed by City Council in conjunction with studies of particular proposed historic districts.


How to apply for secondary street signs


More about the local designation process, districts under study, and final reports

The regularly scheduled meeting of the Historic Designation Advisory Board for January 13, 2022 has been cancelled.

Regular meeting of the Historic Designation Advisory Board. 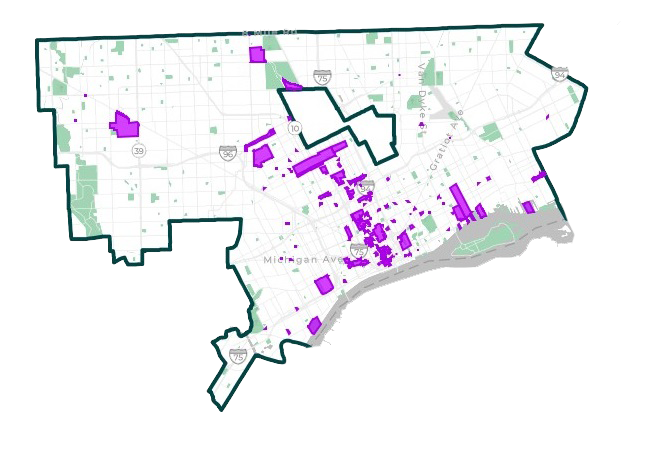 What is a local historic district?

A local historic district is an area of historic, cultural, or architectural significance that has been formally designated as such by City Council per Section 21-2 of the 2019 Detroit City Code.  An historic district may contain one building or multiple buildings, or may consist of a single site such as a cemetery.

Every local historic district in Detroit meets one or more of the following National Register of Historic Places Criteria for Evaluation:

A. That are associated with events that have made a significant contribution to the broad patterns of our history; or

B. That are associated with the lives of persons significant in our past; or

C. That embody the distinctive characteristics of a type, period, or method of construction, or that represent the work of a master, or that possess high artistic values, or that represent a significant and distinguishable entity whose components may lack individual distinction; or

D. That have yielded, or may be likely to yield, information important in prehistory of history.

Once a local historic district has been established, the city’s Historic District Commission (HDC) will review all building permit applications for exterior alterations to properties within the district. Building interiors are rarely designated. For more information on the HDC review process, please visit their webpage.

What are other types of historic designation?

Please note that these programs are not administered by the Historic Designation Advisory Board.

The National Register of Historic Places is the nation's list of cultural resources worthy of preservation. The National Register (NR) is a program of the National Park Service, an agency of the United States Department of the Interior, and includes all National Historic Landmarks (NHL). Neither NR nor NHL designations affect what private owners can do to their property unless they are utilizing federal historic tax credits or other sources of federal funding. In Michigan, the State Historic Preservation Office (SHPO), a division of the Michigan Economic Development Corporation (MEDC), administers the program.

How do I request a new local historic district? What is the process?

If you are thinking about requesting a local historic district, we ask that you first please provide a community forum for a brief presentation by HDAB staff.

The historic designation process is initiated when any person residing, doing business, or owning property in Detroit submits a request to City Council. The procedure for establishing new historic districts is described below (see Section 21-2-31 of the 2019 Detroit City Code for more information):

Please also send a copy of the request to:

City Council, at its discretion, may adopt a resolution directing the Historic Designation Advisory Board to study the proposed district, as well as appoint two ad hoc members to the Board. The study itself usually takes between four to six months due to ordinance requirements.

City Council may then, at its discretion, introduce the ordinance of designation.  City Council would then follow the ordinary course for the passage of an ordinance, including a public hearing before the Council. After the ordinance passes, the local historic district will be in effect and become regulated and protected by public review through the Historic District Commission. Detroit contains roughly 140 local historic districts.

When are Historic Designation Advisory Board meetings held?

The Historic Designation Advisory Board typically meets on the second Thursday of each month in the late afternoon (usually 4pm). These meetings are open to the public. They are usually held in the Coleman A. Young Municipal Center, but are sometimes held at locations within or near proposed historic districts. Since meeting times, dates, and locations may vary, please call 313.224.3487 in advance for confirmation.

What are some benefits of local historic districts?

What are some benefits of local historic districts?

1. Local districts protect the investments of owners and residents of historic properties.

Insensitive or poorly planned development can make an area less attractive to investors and homebuyers, and thus undermine property value. In contrast, historic district designation encourages people to buy and rehabilitate properties because they know their investment is protected over time.

2. Properties within local historic districts appreciate at greater rates than the local market overall as well as faster than similar, non-designated neighborhoods.
Findings on this point are consistent across the country. Moreover, recent analysis shows that historic districts are also less vulnerable to market volatility from interest rate fluctuations and economic downturns.

3. Historic districts are a vehicle for education.
They are a tangible link to the past and a way to bring meaning to history and to people’s lives. They preserve the original character of buildings and streets, while welcoming growth and innovation within those spaces. They are a living, active record of communities and their residents.

5. Local districts give communities a voice in their future.
By participating in the designation process, citizens can help direct their communities’ path. Making these decisions together in a structured way―rather than behind closed doors or without public comment―gives everyone involved a sense of empowerment and confidence.