To our friends, neighbors, and businesses in Eastern Market, we will need your continued participation as Eastern Market builds on the strong foundation of its past to craft a more prosperous future. Discussions focusing on zoning updates, future development, historic and cultural character, and infrastructure improvements will require your input in the months and years to come. Implementing recommendations resulting from the study requires the collective input and community by-in of the various stakeholders who hold Eastern Market near and dear to their heart. 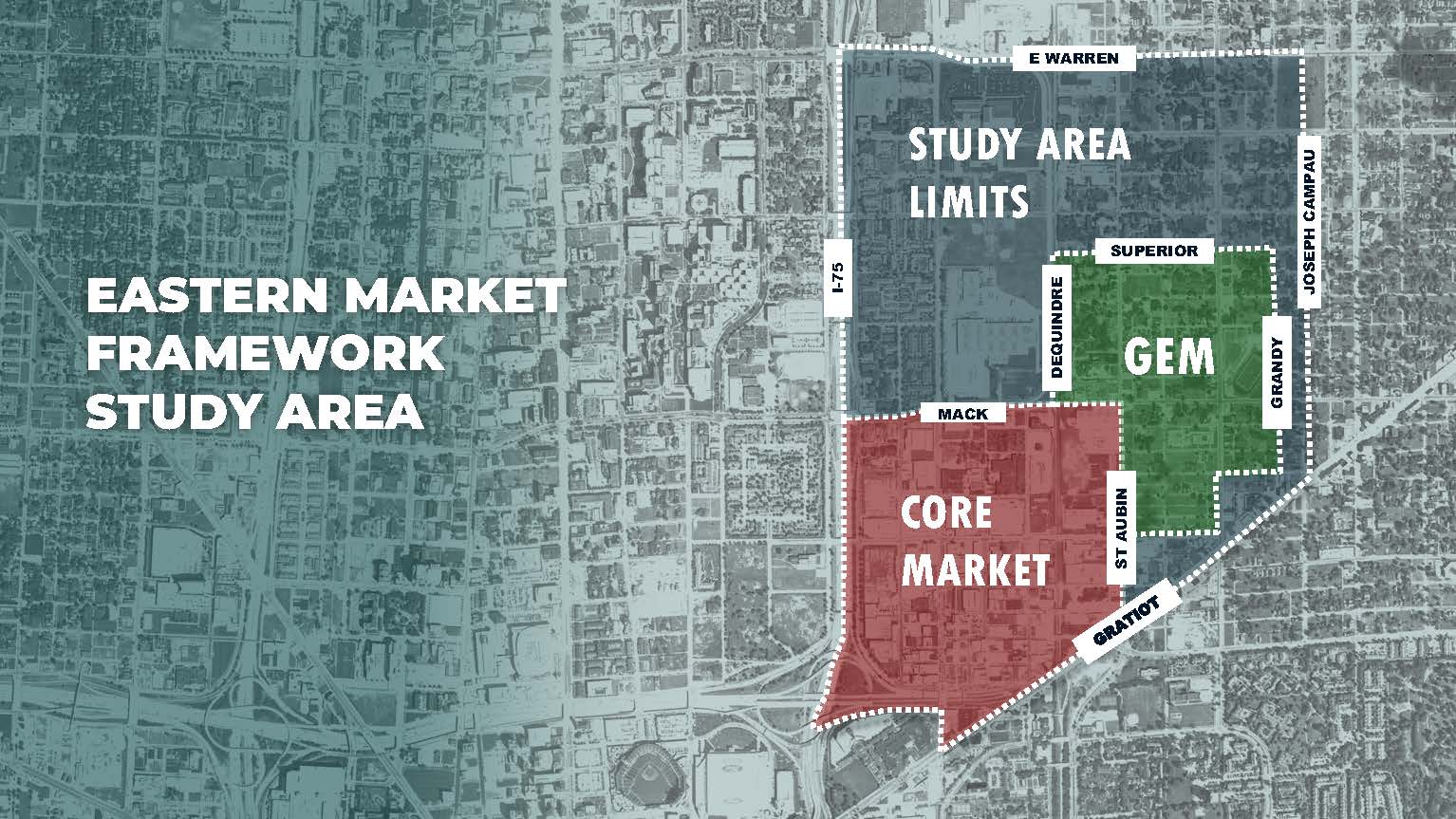 he City of Detroit, as part of the implementation of the Eastern Market Comprehensive Framework and Stormwater Master Plan, has established a new zone, MKT (Market and Distribution).  MKT is the combination of existing zones B6 (general business) and M3 (manufacturing), without the intensive uses allowed in M3.  The MKT zones focus on a food production and distribution centered district, establishing an area for the expansion of the food industry north and east of the Core Market area, and instituting setback and screening requirements to separate food industry from residentially zoned areas.   Eastern Market is the first Detroit district for this update to respond to the needs of a growing regulated food market, while respecting the residents of the area and the inherent character Eastern Market is known for far and wide.  The zoning update will also help to guide how development happens in the future.  The effort in establishing the MKT district is the result of extensive community engagement within Eastern Market and city-wide with residents and stakeholders. 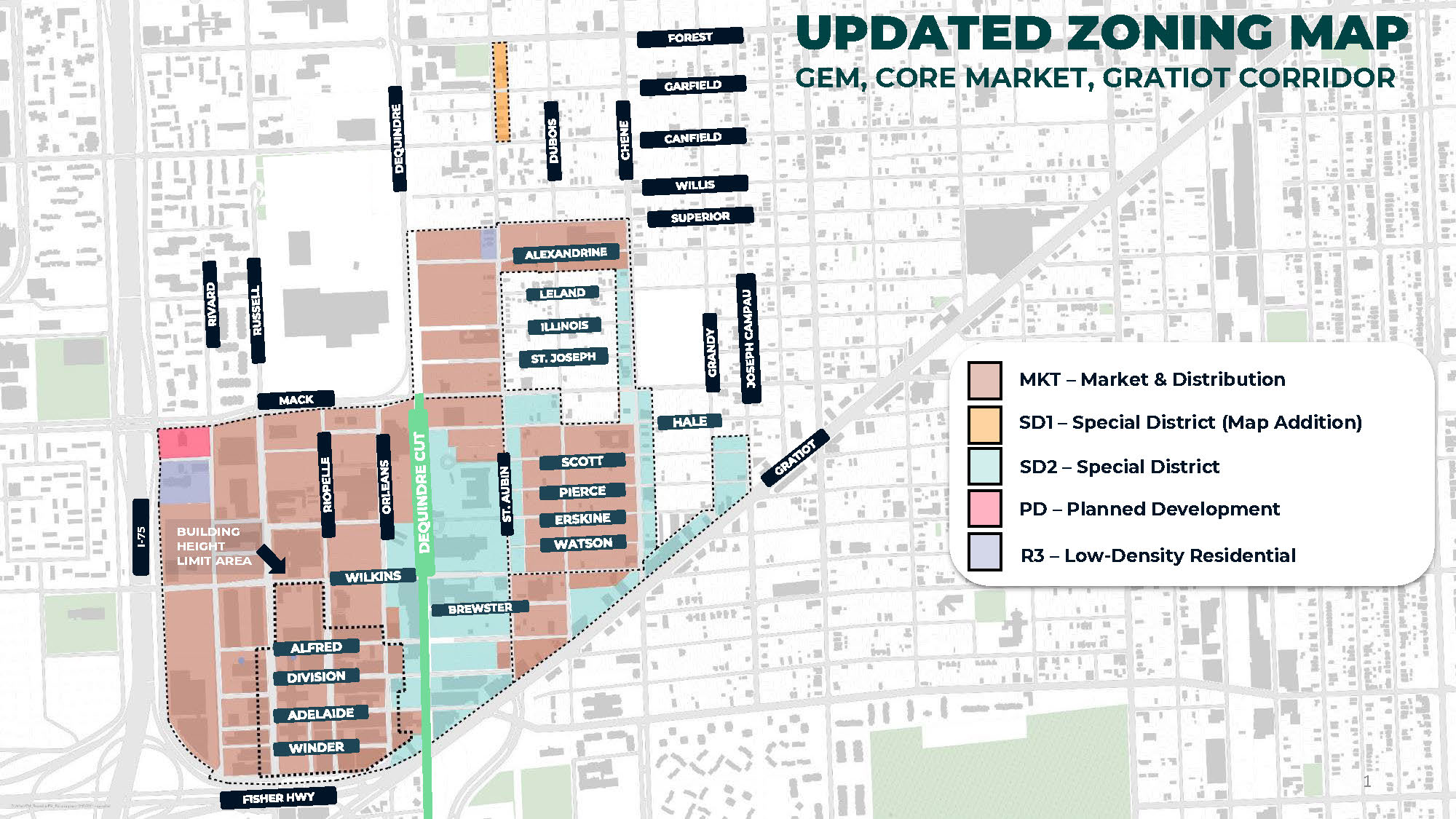 The Detroit City Council has approved an amendment to the Master Plan of Policies on September 13, 2022, both to the Future General Land Use map and to the text of the Middle East Central Cluster, in which Eastern Market is located.  The map amendment designates much of the area east of Dequindre in the area known as “Greater Eastern Market” as “Mixed Residential/Industrial”, the same area that is proposed to be rezoned to MKT and SD2.  The text amendments address the expansion of the food production uses, support the development of mixed-use housing and workforce housing in the area, encourage the use of stormwater management and visual screening to separate residential from food production uses, and finally, support the protection and authenticity of the historic market.

As with the zoning update, future development on publicly-owned parcels requires community engagement to inform the public of any impacts a development may have on their communities.  These impacts will be based on the following criteria: 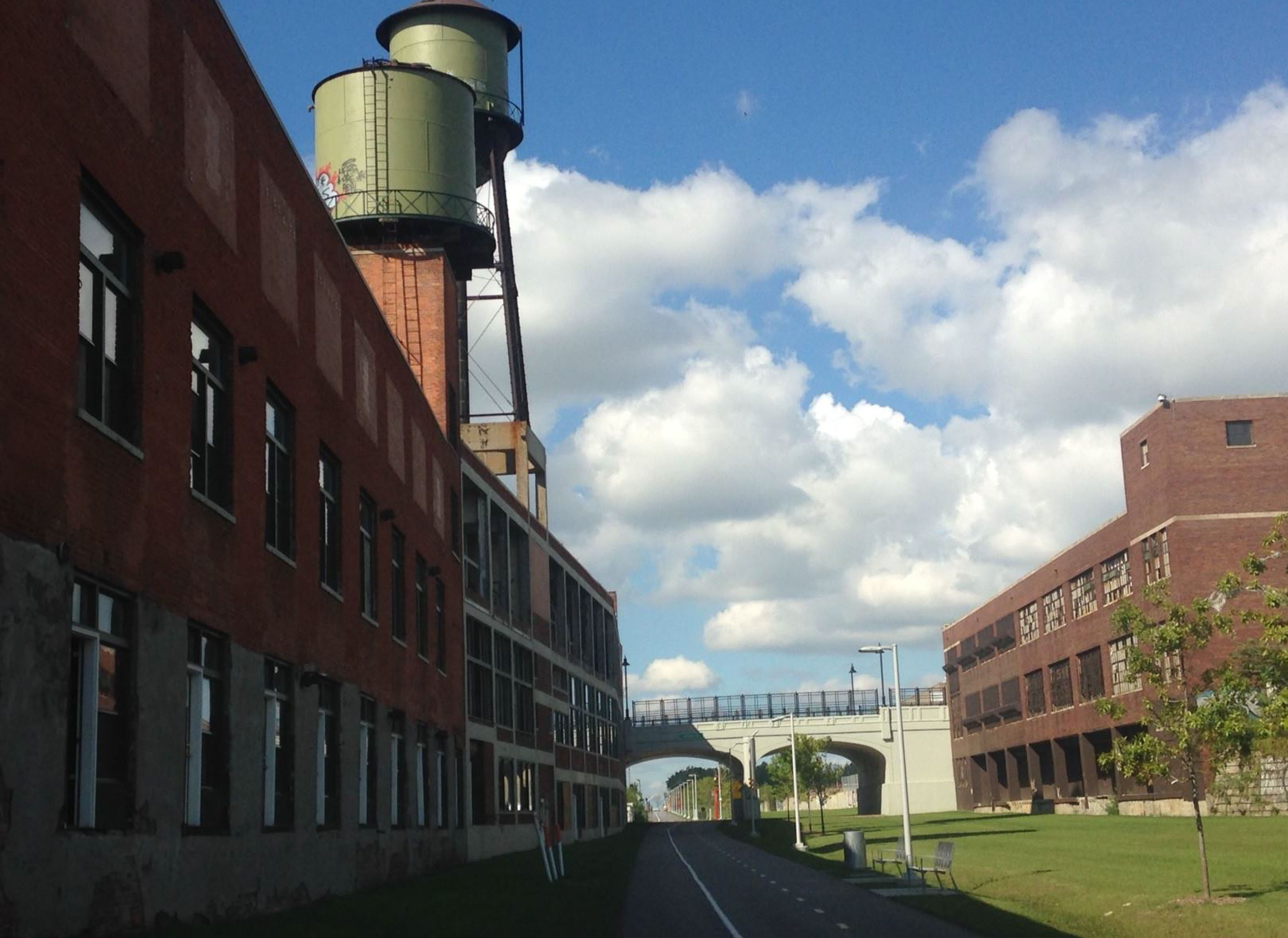 The Planning and Development Department worked with the Historic Designation Advisory Board (HDAB) and Eastern Market stakeholders to propose boundaries for a local designated historic district with the purpose of protecting the integrity, views, and scale of development around the market sheds.  The recommendation to define the boundary around the market sheds was approved by HDAB on June 11, 2020.  At the November 12, 2020 board meeting, HDAB formally adopted the report on the recommendation for a local historic district that seeks to protect the market sheds.

After extensive engagement on the proposed boundaries for a local historic district in Eastern Market in from 2019 into 2021, the Detroit City Council approved the Final Report as issued by HDAB on February 9, 2021.  The district became legal on April 1, 2021. 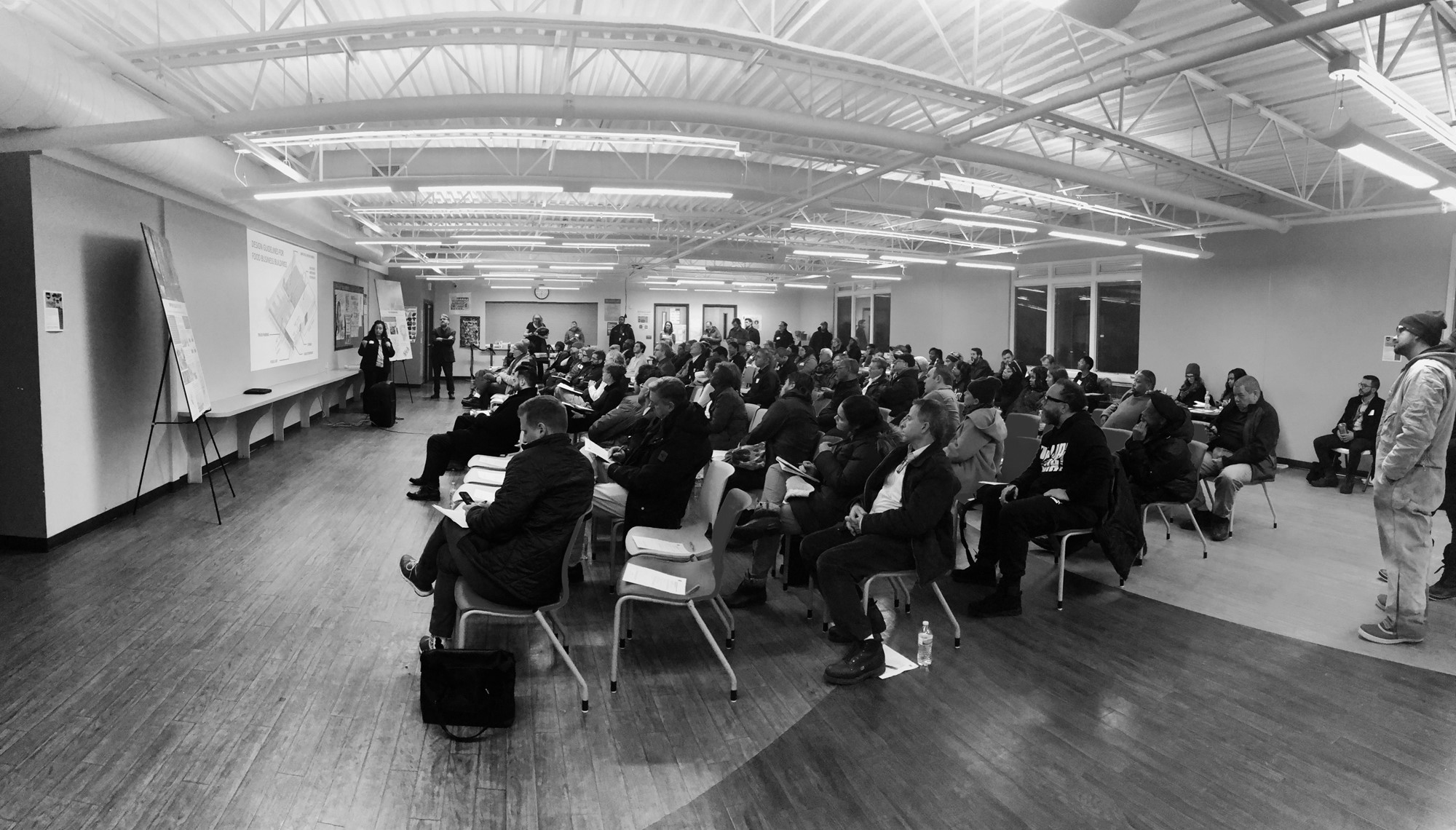 The Framework covers a study area of approximately 1.1 square miles, incorporating the Eastern Market (Market Core) and the surrounding Greater Eastern Market residential (GEM) neighborhood. The goal is for a guide to create a vibrant mixed-use neighborhood that makes Eastern Market the hub of food production and distribution for the Great lakes region while increasing neighborhood amenities, improving the quality of life for local residents, and expanding their opportunities for nearby employment by leveraging a district-wide approach to storm-water management.

Elements of the plan include:

The City of Detroit wishes to thank everyone that attended and participated in the public meeting #4 of the Eastern Market Neighborhood Framework & Stormwater Management Network Framework Plan; as well as the previous public meetings and stakeholder engagements as part of the framework process.  In addition, we also extend gratitude of the framework’s partnership to the Detroit Economic Growth Corporation, The Nature Conservancy, and the Eastern Market Partnership for their involvement in formation of this plan.