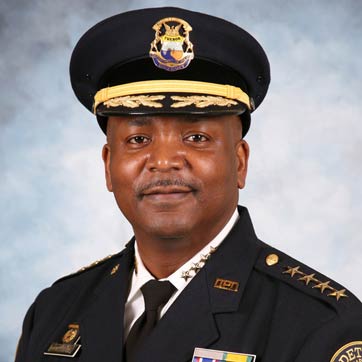 White was born and raised in Detroit, Michigan. He is a proud graduate of Wayne County Community College, where he earned an Associate of Arts Degree in General Studies. He went on to earn a baccalaureate degree in Sociology from Wayne State University, with a minor in Psychology. He later earned a Master of Science degree in Counseling from Central Michigan University and became a licensed mental health counselor. In 2018, White earned an MBA Certificate from the Wayne State University Leadership Academy, Mike Ilitch School of Business.

White is extremely detail-oriented and data driven. He has worked a number of assignments over the course of 26 years in public service, but one of his biggest assignments was spearheading the Detroit Police Department’s compliance for two federal consent judgements as a commanding officer. This led to him orchestrating oversight and policy making for the DPD Civil Rights Integrity Bureau. White is also a strong believer in diversity and inclusion. He established a Civilian Advisory Committee to help bridge the gap between civilians and sworn members within the Police Department.

White is passionate about helping others. So much so, that in addition to his role in law enforcement, he has become a sought-after speaker for counseling and mental health services throughout the Detroit metropolitan area. White is a member of the International Association of Chiefs of Police, a State Certified Counselor, a Counselor with the Northeast Guidance Center, a board member of the Michigan Commission on Law Enforcement Standards (MCOLES), and is involved with numerous additional organizations within the Detroit community.

As a profound model of exemplary supervision in law enforcement administration, James E. White has represented the Detroit Police Department and the City of Detroit with distinction. Throughout his entire career, he has earned the respect of his peers, Detroit citizens, and countless others nationwide.