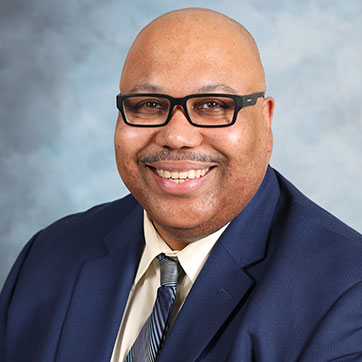 Police Commissioner Ricardo R. Moore is a retired Detroit Police Lieutenant. First elected in 2013 by District 7 residents, he returned to the Board of Police Commissioners after completing a four-year appointment on the State of Michigan Parole Board.

Police Commissioner Moore understands public safety and can relate first hand to crime victims. His grandfather was a victim of homicide; Ricardo and his mother found his grandfather. During his high school years, violence was quite prevalent. Shootings at a homecoming football game, weapon sweeps, and a murder outside the school cafeteria are cornerstones to why he cares about keeping people safe.

He served in the U.S. Army and earned an honorable discharge, then later joined the Detroit Police Department. In addition to distinguished service in law enforcement, Moore’s career includes positions at the Bureau of Prisons, where he was a union vice president, and the Michigan House of Representatives, where he worked as a chief of staff. He also has experience working as an autism assistant.

He is a member of Central CME Church and Phi Beta Sigma Fraternity. His community involvement also includes serving as a Precinct Delegate. He is the father of a son, Ricardo II, and the proud grandfather of three grandchildren.

During his first term, Police Commissioner Moore also served in Board leadership as Vice Chair. He won his second election in November 2021 and began his current term on the Board in January 2022. His district includes the Second, Sixth, and Tenth Precincts.