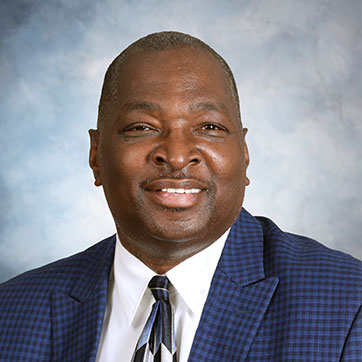 Cedric Banks is the founder of The Heart of Jesus International Deliverance Church, where he has served as its Senior Pastor since 2006. He also is the author of several books and a freelance writer for multiple prominent publications.

A native Detroiter, he graduated from Cody High School and earned his degree in Chaplaincy through the International Police and Fire Chaplains Association Bible College, where he also was certified in grief counseling.

Commissioner Banks has been serving in the community for many years. Metro area residents know him for organizing or hosting job fairs, marriage and single enrichment conferences, human trafficking awareness forums, and events celebrating seniors and cultivating youth. He believes strongly in connecting the community with resources for nutrition and health and for financial literacy and empowerment. Commissioner Banks is an entrepreneur as well and has created jobs for returning citizens and those with disabilities.

Numerous civic and community organizations have honored Commissioner Banks for his service and leadership. His countless awards and achievements include the Michigan Chronicle’s Pastor Salute as one of the Top 50 Pastors in the region; an Appreciation Award from Black Family Development; the Pastor of the Month Award from the Detroit Praise Network (formerly Praise 102.7); and the Distinguished Service Award from the Detroit City Council.

Police Commissioner Cedric Banks won election in November 2021 and represents District 3. The district includes almost all of the 11th Precinct and part of the 9th Precinct. The district also includes small areas of the 5th, 7th, and 12th Precincts.