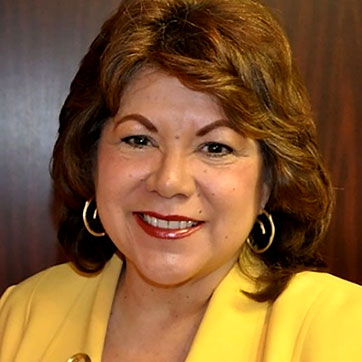 Eva Garza Dewaelsche is President and CEO of SER Metro-Detroit Jobs for Progress, Inc., a workforce development organization established 45 years ago with operations in the city of Detroit, Illinois, Texas and Pennsylvania. Her tenure with SER Metro began some 30 years ago. She worked at National Bank of Detroit for 10 years, is a former Detroit Police Officer and previously served on the Detroit Police Commission from 1999-2003 under Mayor Dennis Archer.

Commissioner Dewaelsche is a graduate of Western High School in Detroit and holds Bachelor’s and Master’s degrees from Wayne State University. She is actively involved in the Detroit community serving on numerous boards and commissions including the Detroit Economic Growth Corporation, Detroit Public Television, Comerica Community Development Advisory Committee, Wayne County Community Development Entity, New Detroit, Inc., Wayne State University Alumni Board and LA SED. She is a life-long resident of Detroit with her husband Robert, and they have two married daughters. Mayor Mike Duggan appointed Dewaelsche as one of four at-large members of the Board of Police Commissioners