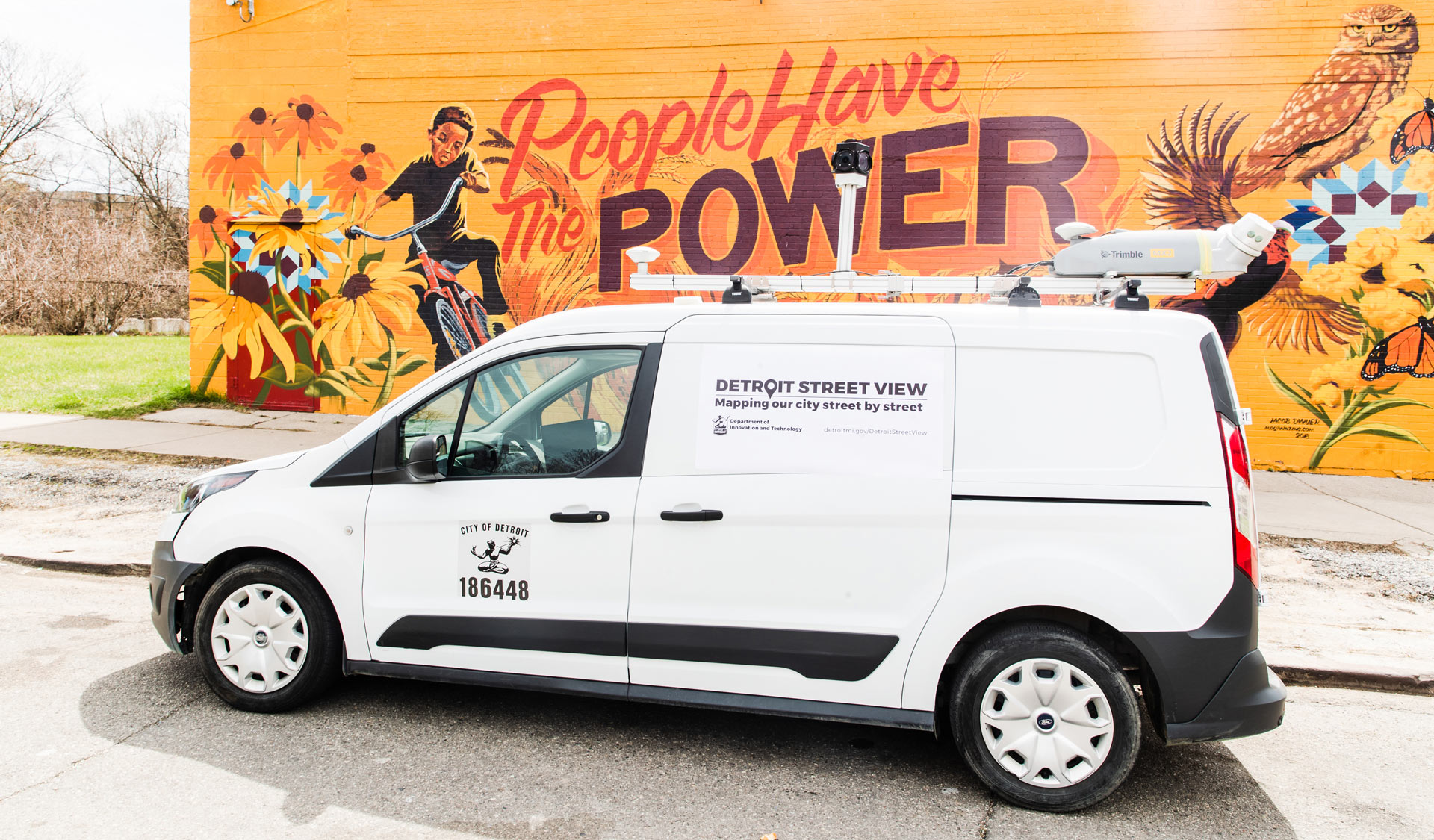 Mapping our city street by street

Detroit is going through a lot of change right now. To understand and document the impact of this change, the City of Detroit regularly gathers its own street level data including: 360 images and 3D street views. Collecting our own data allows us to tell our own story as a city and highlight and track changes to the city. Historically the city has gotten street level data through third parties often means increased costs and less control. Additionally, it is often years out of date. Improved street level data improves citywide communication and planning efforts, the accuracy of property tax assessments and public service delivery.

What is Detroit Street View?

Imagery is an important tool that many departments use on a daily basis. Providing imagery to all departments fosters consistency of data used across departments.

Up to date image data helps ensure that property tax assessors are using the most accurate information possible to determine fair assessments.

Viewing Our City Over Time

All 142 square miles of the City of Detroit is covered and surveyed by the Detroit Street View project, the goal being twice a year. The imagery is made publicly available on free platforms like Mapillary and provided to Departments by embedding the imagery within multiple internal software applications.

Because the City of Detroit runs this project, we can dispatch the Detroit Street View van when there is a fire or flooding in the city to collect imagery data immediately after an event. This allows City Hall to see the damage and deploy resources to the affected area.

LiDAR is the technology in many of today’s self-driving cars but can also be used by professionals in many disciplines from engineering to tech startups. Detroit Street View collects LiDAR data as it drives and the City of Detroit Department of Innovation and Technology is working on making that data publicly available for researchers and residents to innovate using this technology.

The Detroit Street View project collects real time LTE coverage data from major carriers while it drives and will publish that information to the Open Data Portal.

END_OF_DOCUMENT_TOKEN_TO_BE_REPLACED

What is Detroit Street View?

We care about your privacy. We blur all personal identifiable information such as faces and license plates.

Are you giving out tickets?

No, this project is run out of the Department of Innovation and Technology. We don't have ticketing writing ability.

Are you Google/working with Google?

No, we are City of Detroit employees.

Are you spying on me?

No, we are mapping the city of Detroit. Our technology blurs all personal identifiable information such as faces and license plates.

No, we are the Department of Innovation and Technology.

Can you call about a leaky fire hydrant?

Can you get the house next to me tore down?

Please contact the Demolition program at (313) 224-3215 or go to https://detroitmi.gov/demolition for information on how to report a home for demolition

Can you guys do something about people dumping in my neighborhood? Who do I call if I see somebody dumping?

You can call the Ombudsman office to report illegal dumping at (313) 224-6000. You can also download the ImproveDetroit app on your phone or report an issue online

Do you assess home values?

Doesn't Google already do this?

Google doesn't survey the city twice a year, we do. Detroit is a constantly changing city, we want to be able to collect the data that departments need in order to provide residents with the city services you need. We are using additional technology to identify traffic signs, light poles, and fire hydrants automatically. We then provide that imagery to departments so they can provide better city services to residents.

How do I see myself or my house on the internet?

You can go to detroitmi.gov/DetroitStreetView to look at an overview of the project. There is a link to view the information collected, just put in your address and check out Detroit Street View.

How does taking photos/mapping help the city or myself?

It saves tax payer dollars to allow all the departments access to the same data - each department doesn't have to pay for data collection separately. The Department of Innovation and Technology collects the data twice a year and provides it to all departments. We also have the ability to collect data after an emergency to allow City Hall to see the damage and deploy resources to the affected area.

How often will a city be doing this? Who is paying for this? Who owns the data?

Twice a year. The Department of Innovation and Technology received a grant (Mayor's Innovation Competition) to pay for the equipment. City employees salaries are paid for in the Department budget.

The city of Detroit owns all the data collected and provides it to other departments and residents for free.

What does the city use with this information?

This data is available to all city departments so that decisions can be made using the same data. It saves the tax payer money to collect the information once and used by multiple departments to make decisions from replacing a traffic sign to boarding up an abandoned home.

Your personal identifiable information (for example your license plate and face) is blurred automatically using technology before it is uploaded to the internet.

What is the purpose of collecting this data/what is the data being used for?

This data can be used by all city departments to provide city services to residents. For example, it allows us to identify graffiti and blight so that it can be addressed. Using this data for example, will allow the traffic engineering department to know where all traffic signs are and if they are in need of repair or are missing. We are also collecting LiDAR data (autonomous cars use LiDAR to know how to drive) that will allow researchers and residents to innovate for the future.

We are surveying all 204 neighborhoods twice a year.