What is a TMSO?

In 1999, Detroit City Council established the Commercial Strip Revitalization Task Force to examine ways to strengthen Detroit commercial corridors.  Modeled after the national and state Main Streets programs, one of the recommendations of the task force was to designate certain corridors as “Main Streets” and to create distinctive design standards for those.  These design standards are one of the tools used to create and reinforce identity to attract additional people to areas.  The goal was that these designated “Main Streets” look distinct from other commercial strips in the area and be pedestrian-friendly.

The Detroit Zoning Ordinance was amended in 2005 to designate certain streets (shown as orange on the map below) as Traditional Main Street Overlay (TMSO) Areas, in partnership with the community and business groups for those areas. It was felt that these areas had, or had the potential to be, pedestrian-scale, walkable areas with a traditional urban feel. In 2020, four additional areas (shown as purple on the map) were designated.

Future development within these areas should be geared, as much as possible, toward mixed-use buildings with first-floor pedestrian-generating uses. The design of buildings should be people-oriented (as opposed to passing cars), being built with the front on the sidewalk with doors and lots of windows facing the street, and be made of quality materials.

What are the benefits of being in a TMSO?

Is my property in a Traditional Main Street Overlay area?

The following areas are designated as the original Traditional Main Street Overlay Areas in 2005, highlighted in orange on the map:

(6) Woodward. All zoning lots abutting Woodward Avenue between the centerline of Temple Avenue/Alfred Street and the city limits of Highland Park.

The following areas are designated as the new Traditional Main Street Overlay Areas in 2020, highlighted in Purple on the map: 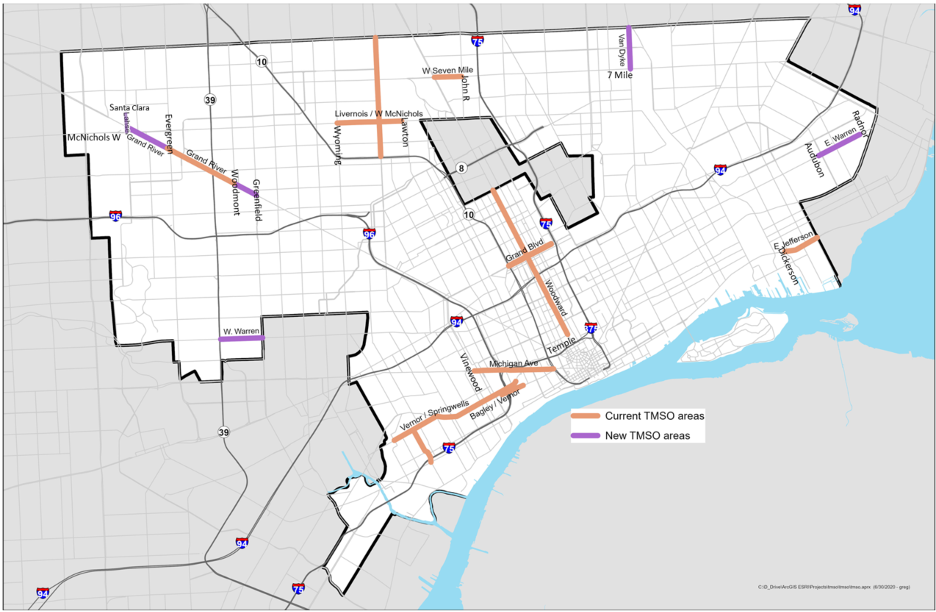 What are the rules?

For the all TMSO areas (original and new) the summary of the standards is below:

For the original designated areas, highlighted in orange, these additional design standards apply, in addition to those listed above. In summary, those are:

Please note, there are also standards for things such as security grills, blank walls, mechanical equipment screening, awnings, fencing, and other things.  Please review the complete ordinance before beginning any work.