SUMMARY OF PROCESS FOR ENACTMENT AND POSTING OF CITY ORDINANCE

* Disclaimer; Ordinances recently enacted by City Council may not be immediately available via Municode but may be accessed on the respective department webpage that submitted the Ordinance or by searching for the specific Ordinance on the City's homepage; detroitmi.gov 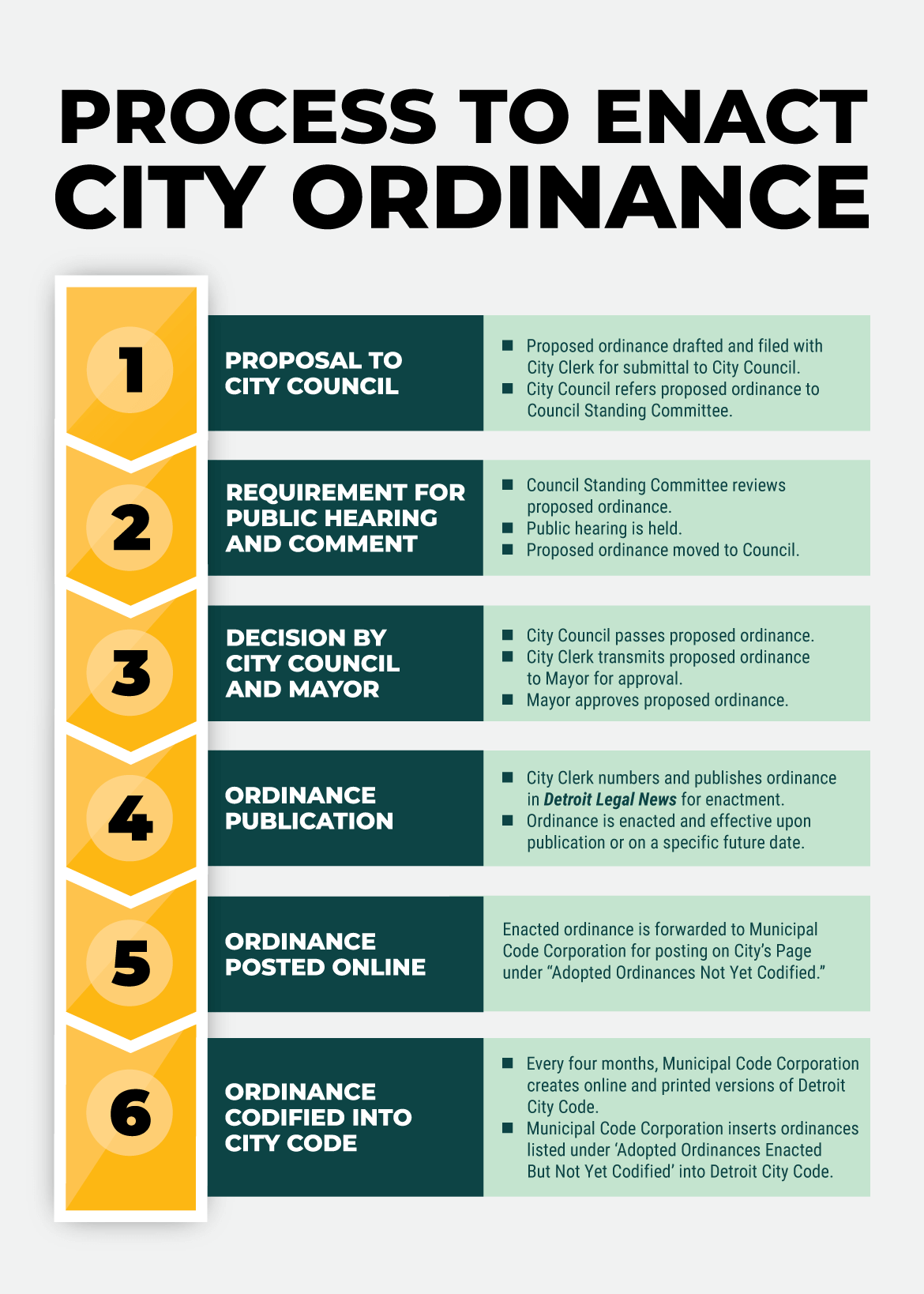 FULL DESCRIPTION OF PROCESS FOR ENACTMENT AND POSTING OF CITY ORDINANCES

The enactment of a City ordinance involves many entities and persons, including the City Council and its divisions, the Mayor and his departmental personnel, the Corporation

Generally, these are the necessary steps for enactment and posting online of a City ordinance:

(3) At a formal session, the City Council refers the proposed ordinance to the appropriate City Council Standing Committee for discussion and consideration;

(6) After the public hearing at the Standing Committee, the Committee moves for the proposed ordinance to be placed on the City Council Formal Agenda for a vote;

(7) At the Formal Session, the City Council may pass the ordinance by a vote of at least a majority of members present;

(8) Within four days of passage, the proposed ordinance is transmitted by the City Clerk to the Mayor for his approval or veto, which must be made within seven days of his receipt;

(9) In the event that the Mayor vetoes the proposed ordinance, the City Council may reconsider the ordinance at a regular or special meeting that must be held within one week of receipt of the veto from the Mayor. The City Council by

a vote of two-thirds of members serving may pass the proposed ordinance over the Mayor’s veto;

(13) After receipt of an “Okay to Print,” the Detroit Legal News prints 50 copies of the ordinance in pamphlet form, which are shipped to the Office of City Clerk for storage, filing, and distribution as requested, to City elected officials, appointees and employees, and to members of the public. Simultaneously, the Detroit Legal News forwards a copy of the ordinance in pamphlet form to the Municipal Code Corporation, which, within 24-48 hours after receipt, posts the ordinance on the City’s Page on the right-hand side under “Adopted Ordinances Not Yet Codified;” and

(14) Three times a year, the Municipal Code Corporation prepares a supplement, which codifies ordinances that were enacted, respectively, during the Months of January through April, May through August, and September through December and are contained on the right-hand side of the City’s Page. Each supplement updates the online and printed versions of the 2019 Detroit City Code. All ordinances that are codified into the 2019 Detroit City Code are removed from the list that is contained under “Adopted Ordinances Not Yet Codified” but retained on the City’s Page under the City’s “Ordbank.