Proposed “Pay as You Stay” program would wipe out all penalties, interest and fees on back property taxes 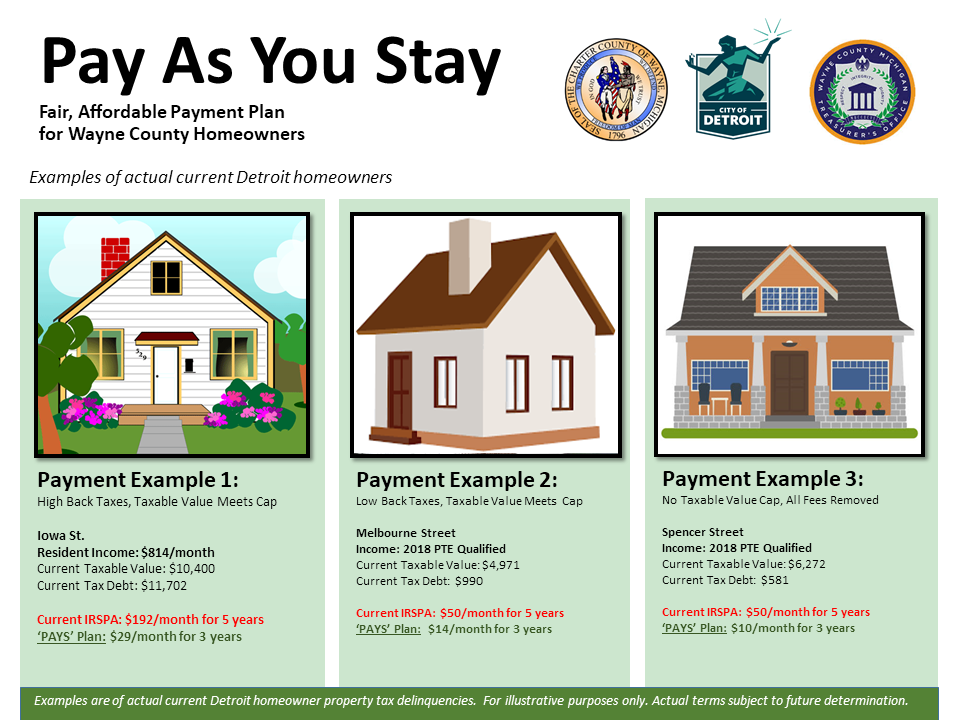 Draft legislation for the “Pay as You Stay” (PAYS) plan, expected to be introduced this week by Rep. Wendell Byrd (D-Detroit), would help approximately 31,000 Detroit homeowners stay in their homes by dramatically reducing the amount they owe on their back taxes and lowering their monthly payments.

How “Pay as You Stay” works

“Pay as You Stay” is a simple, three-part plan:

“Since 2015, we’ve been able to reduce the number of occupied foreclosures by 94 percent, but far too many Detroiters still are at risk of foreclosure,” said Mayor Mike Duggan. “Pay as You Stay” would help more than 31,000 Detroit homeowners stay in their homes by eliminating interest, penalties and fees and making payment plans affordable for those who need them.”

“Pay as You Stay” is intended to address the remaining Detroit homeowners at risk of foreclosure by reducing the undue burden many residents face.

“As we look to continue Wayne County’s rebuild we need to take more steps to address foreclosures and help residents break the cycle of poverty,” said Executive Evans. “Over the long term, we are much better off with people in their homes. This legislation reduces the burden on residents in payment plans and better positions them to avoid foreclosure while providing a more achievable path to home ownership.”

Today, homeowners are able to qualify for the Interest Reduction Stipulated Payment Agreement (IRSPA) payment plan. Created and then extended by the Michigan Legislature after lobbying by Mayor Duggan and Treasurer Sabree and his predecessor, the program offers a 5-year term and reduces the interest rate from 18 percent to 6 percent.

However, officials recognize that this payment plan, while far better than previous, still results in monthly payments that can be unaffordable for many Detroit residents.  To address this, the PAYS plan would restructure the debt, drop the interest rate to zero percent, greatly reducing the monthly cost and the time it takes to become current from five years to three:

The “Pay as You Stay” plan would be administered by the Wayne County Treasurer’s Office, and open for enrollment for three years after the program launches.

The State Legislature will need to act to approve the “Pay as You Stay” plan.

"This proposal is one of many steps being taken in the right direction to help residents be able to afford to stay in their homes," said Rep. Byrd.  "It's important that we can retain every resident so we can strengthen our neighborhoods and rebuild our city's population."

Occupied home foreclosures down 94% since 2015; plan will help address remaining homeowners at risk

The drop is a result of intentional efforts by the City, County and community organizations to keep homeowners in their homes: