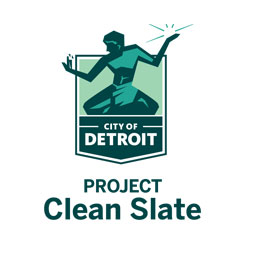 Project Clean Slate was launched by Mayor Mike Duggan in 2015 to provide assistance to Detroiters with criminal records in getting those records expunged, allowing greater access to opportunity in multiple areas such as employment, housing, and access to public benefits.

To be eligible for expungement, candidates must have no more than one felony or two misdemeanors. Per State law, traffic offenses are not eligible, and it must be at least five (5) years since the date of conviction, release from incarceration or discharge from probation or parole. Due to the complexity of the application process, the City has also hired two full-time lawyers to assist Detroiters with their expungement applications.

"Prior criminal records - even for minor offenses - are a major barrier to jobs and opportunity for thousands of Detroiters," said Mayor Mike Duggan. "People who have paid their debt and want to rebuild their lives can count on the City of Detroit to help them through the expungement process and connect with jobs through Project Clean Slate."

“Project Clean Slate breaks down barriers that stand between Detroit residents and their dreams,” said City of Detroit Corporation Counsel, Lawrence García.  “The legal process for expungement is not simple and mistakes can cause up to a three-year delay before a further expungement application can be made. Free legal services and qualified help in preparing applications can greatly increase chances of success, and PCS is an important benefit for those who need it.

“Within a year, people who have had their records expunged typically see a 25% wage increase; it is a great honor to help Detroiters take control of their financial well-being and professional ambitions,” added Garcia.

Since the start of 2019, nearly 200 Detroiters have had records expunged, with many still in process. Previous events have been well attended and in addition to the many lawyers and City of Detroit staff available to help on the day, Ford Motor Company is also providing volunteers to assist Detroiters in navigating the event.

“Ford Fund is about making people’s lives better and this event will open doors for new job opportunities that will help city residents improve the quality of their lives,” said Todd Nissen, director, Ford Volunteer Corps, a signature program of Ford Motor Company Fund. “We’re pleased that we are able to support this initiative and help strengthen our community.”

Eligible Detroiters will have access to dozens of lawyers offering free legal consultation. Attendees should bring I.D. and any information or legal documentation they have regarding offenses or conviction history. In addition to expungement, Detroit at Work will be there to provide information to Detroiters about the wide range of career opportunities that are still available even without expungement.