The Next Step: Detroit Aims to be Free of Residential Blight by the End of 2024

May 31
POSTED BY Office of the Chief Financial Officer

Since 2014, the City has demolished nearly 18,000 blighted structures, and the Detroit Land Bank has sold 6,000 vacant houses to be rehabbed and occupied. But there are still 18,000 abandoned houses in Detroit that we need to demolish in the next five years, without federal funds.  At his May 2019 Mackinac Policy Conference address, Mayor Mike Duggan laid out this vision: Detroit will be free of residential blight by the end of 2024. 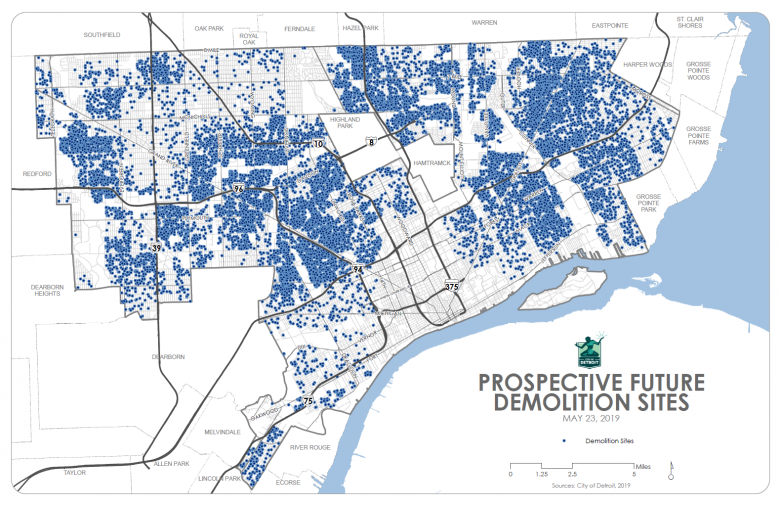 In March of 2020, the City will ask voters to support a blight removal bond issue of $200+ million.  In combination with other funds, this investment will allow for the demolition of 4,000 houses/year from 2020-2024 and sale of renovated and as-is houses that can be saved. This effort to fully remove residential blight will NOT require a tax increase.

The complete elimination of these dangerous structures is critical to the city’s resurgence. The results of the City’s demolition program so far have been promising and substantial:

-         90% average increase in Detroit property values according to Zillow

In 2018, the city saw home values increase in 90% of neighborhoods and 1,300 new mortgages (more than any year since before the Great Recession), due in part to the investment in blight removal. In addition to improving the City’s property tax base, this increase encouraged private investment in neighborhoods at levels not seen in decades. As property values in neighborhoods increase beyond $20 per square foot, it becomes more economically viable to renovate houses in the private market.   As shown in the maps below, the areas of the city that now have an MLS average over $20 s/f has increased significantly since 2014. 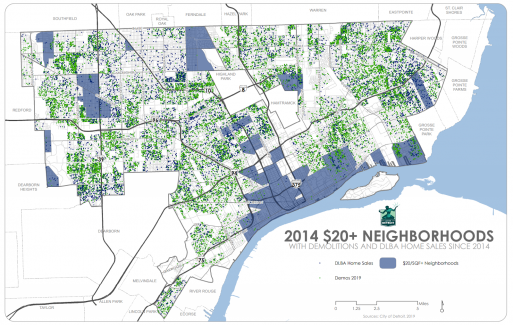 Improving police and fire services is a critical component to the City’s Plan of Adjustment. According to a Wayne State study, “Violent crime and property crime drop in areas where blighted homes are razed in Detroit — and the more vacant, dilapidated houses that come down in an area, the greater the crime reduction.” Similarly, the reduction in fires has been remarkable. The Detroit Fire Commissioner credited the reduction to, “an aggressive blight elimination program, bolstered investigations, inspections as well as community education efforts and city block clubs.”

Detroit has the capacity to make this critical investment in blight reduction due to collaboration with City Council to improve the City’s finances. After successfully exiting active state financial oversight in 2018, Detroit has continued fiscally responsible practices in enacting its Fiscal Year 2020 budget.

In addition to a balanced budget, the City has a multi-year capital plan to support its investments in infrastructure.  Funding for the City’s overall capital plan is sourced from a combination of bond proceeds, street funds, federal funds, Water and Sewerage revenue, pay-as-you-go funds, philanthropy and other sources. The City has the capacity to make a $200+ million investment in blight reduction and continue critical investments in infrastructure without increasing taxes above the Fiscal Year 2020 debt millage. 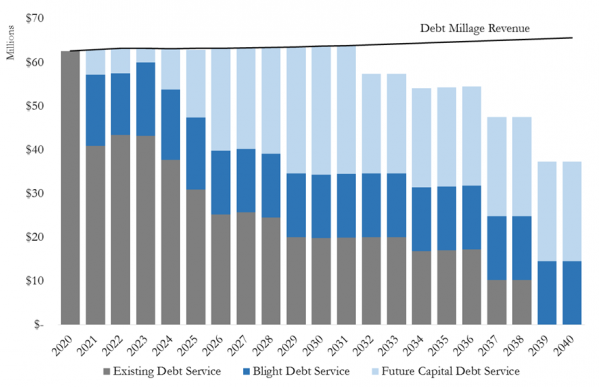 As the City makes sound investment decisions, it strives to improve the City’s infrastructure, expand economic growth and continue to revitalize our neighborhoods. Detroit found immense financial and quality of life value in the blight reduction program. Detroit has the capacity to complete this investment due to its strong financial practices. With the voters’ approval of the proposed bond issue, as the Mayor said on Mackinac, “a blight free Detroit should not be a goal, it should be a given.”