DETROIT - Detroit Mayor Mike Duggan has presented Detroit City Council a request to authorize a March 2020 ballot initiative asking voters to give the city authority to sell up to $250 million in bonds to remove all residential blight from every Detroit neighborhood by mid-2025.

The city is at the mid-way point in its historic blight removal effort.  Since 2014, the city has demolished 19,000 vacant homes while another 9,000 have been or are being rehabbed through Detroit Land Bank programs.  Through a mixture of bond funds and annual city budget allocations, 19,000 more structures will be demolished, and the Land Bank will sell or take legal action on 8,000 more to be rehabbed and reoccupied.  Mayor Duggan said he expected the bonds would be sold and the funding available by the middle of next year. From that point, the work would take the next five years to make all Detroit neighborhoods free of residential blight.

Up to now, the City’s blight removal efforts have been funded primarily by $265 million of federal Hardest Hit funds, which have been supplemented with a smaller portion of available city dollars.  Federal restrictions on where Hardest Hit Funds can be spent have limited the areas where large-scale demolition could take place.

“For the past five years, residents living outside of the federal boundaries have been asking me when it’s going to be their turn and those have been difficult conversations,” the Mayor said.  “Because these funds will be completely controlled by the city, neighborhoods that have lived with blight for decades will see all of it removed within five years of the bond sale being approved.”

The bonds would be repaid back over the next 30 years using existing tax revenue budgeted for debt retirement.  The bond sale would not result in increased taxes. Without the bond funds, the city expects it would take 13 years to complete the same number of demolitions using available city general fund surplus appropriations called for in the city’s Plan of Adjustment.

Mayor Duggan also thanked federal officials for funding the city’s blight removal efforts for the past several years and getting it to the point of being able to complete the job itself.

“I can’t thank the US Treasury Department and Sen. Debbie Stabenow enough for supporting our blight removal efforts with $130 million that have flowed to our program uninterrupted over the past three years,” said Mayor Duggan.  “It has put us in a position to finish the job they helped us start.”

The administration on Friday submitted a proposed resolution for the bond sale to City Council for its consideration. If approved by City Council, voters would be asked to approve the bond sale at the ballot box during the March 2020 Presidential primary election.

“This opportunity for us is transformational,” said Councilmember Andre Spivey.  “We have long heard the concerns to give more attention to our neighborhoods and this provides an opportunity to change the landscape and prepare for further neighborhood revitalization.”

Nortown Neighborhood resident Diane Allen says she supports the proposal.  Allen was the president of the East Outer Drive Block Club for seven years and had to deal with frequent complaints from her members about vacant homes and illegal activity taking place in them.

“I support doing whatever it takes to get these vacant houses down,” Allen said. “There is still a lot of blight in our neighborhood and we’ve waited for years.  It’s a great relief to see that there is finally a plan for getting to our neighborhood.”

In addition to the 19,000 properties that would be demolished using the combination of bond funds and available city general fund surplus appropriations over five years, Duggan said he anticipates another 8,000 will be renovated through Land Bank sales and legal actions against owners privately owned vacant buildings.   He also is proposing using a portion of the bond funds to help incentivize renovations on 1,000 or more of these homes that otherwise would be demolished.

“If it’s going to take $15,000 to demolish a house that would be salvageable if not for the high cost of renovation, we can use that same $15,000 to help pay for renovations, instead of demolition,” the Mayor said. “This wasn’t possible with our federal funding due to US Treasury rules, but since we are moving forward with all city funding, we have the ability to be more creative.”

While the majority of demolitions in the city thus far also have been bound by federal rules that prohibit the city from granting location based preferences, the city’s demolition program going forward will have greater latitude to allow it to use such preferences.  Since 2018, 54% of all city-funded residential demolitions have been completed by Detroit-based businesses, compared to 37% on federally funded demolitions.

The City’s Office of Contracting and Procurement also will establish limits on the number of properties each contractor can be awarded at a time, which will create more opportunity for smaller companies.

Councilmember Scott Benson said he sees the proposal as a way to strengthen neighborhoods and Detroit based businesses.

“Detroit’s best hope for maintaining its momentum is to cut red tape and move quickly to demolish and rehab homes and commercial structures throughout the city. I’m excited that Detroit-based businesses will have increased access to opportunity to rebuild our city through this proposal.”

In order for the ballot initiative to make the March 2020 election, City Council will have to approve ballot language by December 17th.  Mayor Duggan said he hopes for earlier approval to allow for a full public education campaign.

If the measure is approved by voters in March, the city plans issue debt by the end of the summer and begin applying the bond funds to blight removal program. 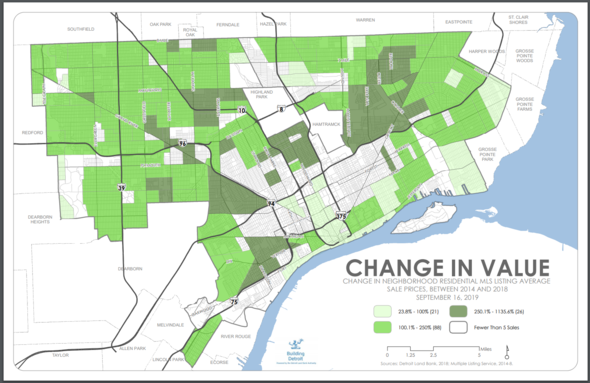 No other city effort has as much positive impact on neighborhoods than blight removal, Mayor Duggan said.  Since the city ramped up its demolition and vacant home renovations efforts in 2014: