Mayor Mike Duggan announced today a major expansion of the city’s speed hump installation program, which the city first tested in 2018 as a method to reduce speeding and improve safety in city neighborhoods. Under the mayor’s plan, the Department of Public Works will nearly quadruple the number of speed hump installations it performs next year to 4,500, up from the previous high of 1,200 this year.

The speed hump program first launched as a pilot in 2018, consisted of installing speed humps along a small number of residential side streets among each of the seven City Council Districts with the intention of soliciting resident feedback. Response has been so favorable, the city has responded by increasing the size of the program each year.

“Probably the single biggest neighborhood concern we have been hearing from residents this year is speeding and reckless driving along residential side streets, so it’s not surprising that the speed hump program has become so wildly popular,” said Mayor Duggan. “We know this is a priority for residents, so we are making the expansion of this effort one of our highest priorities for the next year.”

The speed humps are one part of the city’s traffic calming efforts to increase overall neighborhood safety and slow down motorists in those areas with high pedestrian traffic. In 2020, streets adjacent to city parks and schools were given priority. In 2021, the city will continue to prioritize streets that have the greatest impact on making our residential neighborhoods safer.

Some of the determining factors for a street to receive a speed hump will include:

The 4,500 locations for speed humps will be on streets with a 25 mph speed limit. Installation will start next spring on sites determined by the road engineering department based on 3 criteria:

Specific emphasis will be placed on streets often used as a cut-through, or shortcut to bypass major road traffic.

“Each location will be evaluated and selected based on these criteria, so each neighborhood is treated equally,” said DPW Director Ron Brundidge. “Our hope is that the additional 4,500 speed humps will help to create safer neighborhoods across the city for pedestrians, motorists, cyclists and anyone else traveling on our residential streets.”

The new speed humps will be installed by a combination of city workers and contractors. The city is looking to work with smaller, Detroit based, minority-owned asphalt companies to complete this work. Interested parties should contact DPW this season at 313-224-3901, to develop an understanding of the required work, and what they will need to do to put themselves in a position to bid on the work next year. Work is expected to begin in Spring of 2021.

Contractors and city workers will be installing speed humps today between 3:30 PM – 4:30 PM. For any media interested in getting live footage of the installation process, please contact Nicole Simmons at 404-447-6177. 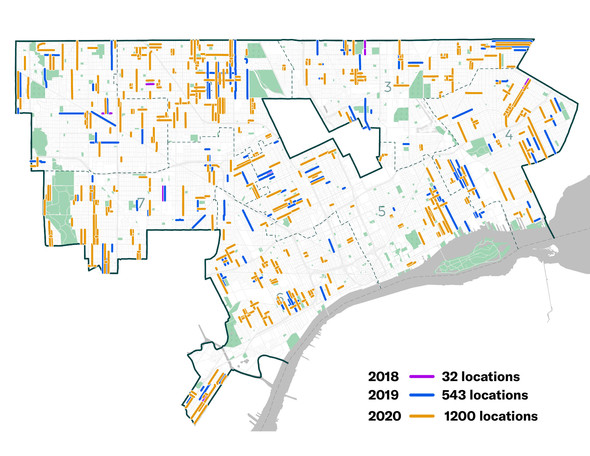