Jan 21
POSTED BY Office of the Chief Financial Officer

Residential property assessments in Detroit are projected to increase by an average of over 8% in 2021 tax, based on the most recent analysis of property values across the city, Mayor Mike Duggan said today.  The numbers, which are based on two years of actual market sales, mark the fourth consecutive year of growth across the city.

However, while property values in the city have increased steadily, homeowners are protected against large property tax increases. Under state law, the annual increase in property taxes is capped this year at 2%, as long as ownership has not changed. When a home sells, the cap is lifted and the taxable amount adjusts to the State Equalized Value the year following the transfer.

“189 out of 194 neighborhoods in the city saw their property values rise,” said Mayor Duggan.  “Our homeowners are building wealth without significant tax increases.”

Just yesterday, S&P Global Ratings announced that it had moved the City from a negative to a stable outlook based in part on the success of the city’s neighborhood revitalization strategy.

According to Detroit Assessor Alvin Horhn, when Detroit was in bankruptcy in 2014, the city’s residential values were in a tailspin and had lost an estimated $3 billion in value in the great recession.  “We cut residential assessments by 20% in early 2014 and cut them further in 2015,” Horhn said.  “Now property values are rising much faster than taxable value because of the state’s inflation cap.”

To determine this year’s assessment, the city examined two years of actual market sales. This year that included 62,355 transfers of all types, including market sales, quite claim deeds, and land contracts. The Office of the Assessor reviews aerial and street level imagery of properties to determine property characteristics as part of the valuation process.

Here is a breakdown of this year’s assessed residential value changes across the city’s 194 neighborhoods: 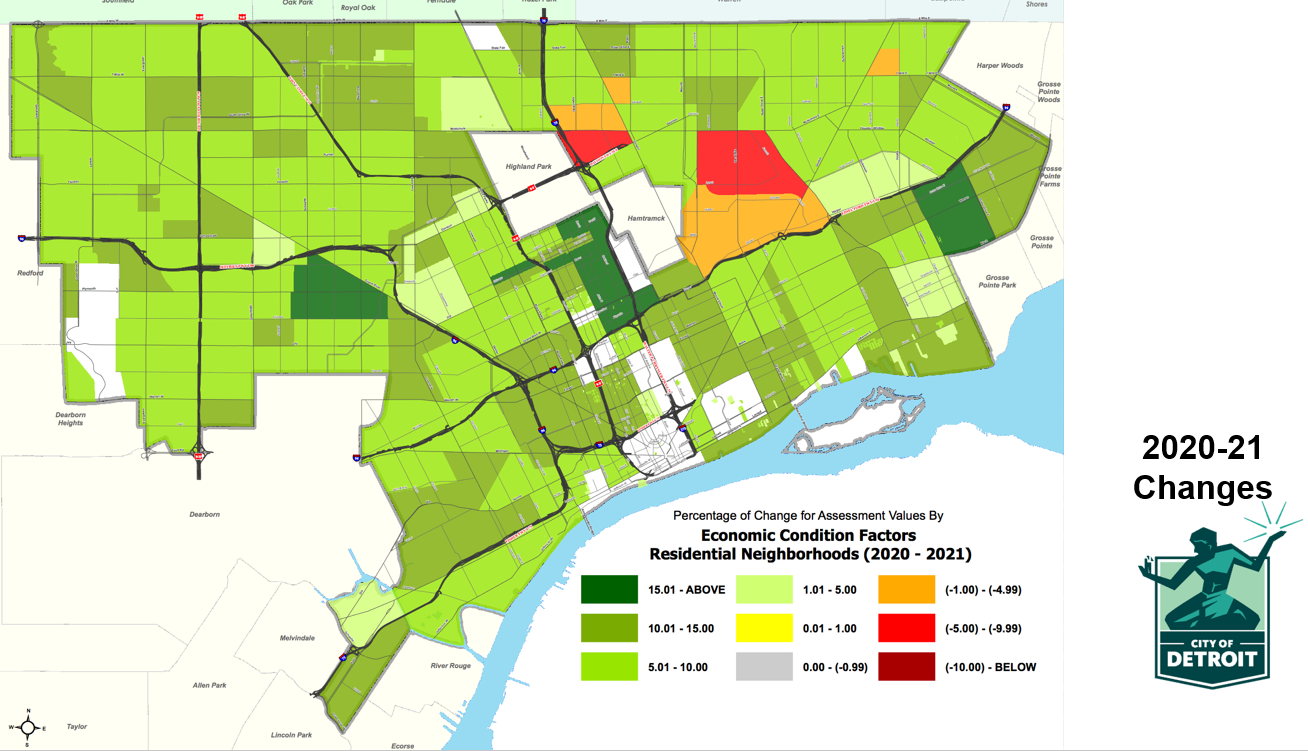 Proposed Assessment Notices being mailed this next week

Notices will be mailed beginning next week, January 25, 2021 to the city’s 399,091 residential, commercial, industrial, and personal property owners, advising them of their proposed assessments for 2021. These are not tax bills. Actual bills will be mailed out at the end of June and November.

Under State law, property owners have the right to appeal the proposed changes. The proposed 2021 Assessments are tentative until the completion of the local review period in March and any possible changes from the Wayne County Equalization in April.