The Detroit Office of Arts, Culture and Entrepreneurship is proud to join the Detroit Institute of Arts in hosting an art exhibition and auction featuring the works of young artists of color September 24. Curated by Detroit artist Luis Bloom, the event features current works by some of the most talented of a new generation of Detroit creatives.

The event is set for 5PM in the ballroom of the St. Regis Hotel, 3071 E Grand Blvd, Detroit, 48202. The exhibit's curator is Bloom, a 27-year-old abstract pop artist. All pieces can be previewed at https://www.luisbloom.com/ygw. Some are for auction, and some are for sale.

“The City of Detroit’s Office of Arts, Culture, and Entrepreneurship has played a critical role in elevating the city’s arts community, and the DIA is grateful for the opportunity to support those efforts,” said Salvador Salort-Pons, the renowned art historian who has been at the DIA helm since 2015. “Creativity exists in every corner of our city, and events such as this shine a light on Detroit’s talent.”

Rochelle Riley, the City’s Director of Arts and Culture said, “Detroit has always nurtured creative entrepreneurship, and as Motown did with young students in the ‘60s, Detroit ACE will do that with young people in the 21st Century.

“Providing opportunity, opportunity, OPPORTUNITY, along with support and exposure is at the heart of the ACE mission,” she said. “Young artists sometimes have difficulty getting into our best galleries whose walls and halls are filled with longtime professional genius. I want them to have a chance to be seen and to shine.”

DIA Board Chairman Eugene Gargaro thanked Bloom and the ACE Office for their “exemplary leadership on behalf of young Detroit artists as beacons of the future! The DIA is proud to join you in supporting Young, Gifted, and Woke and highlighting this next-generation of leading artists.”

The exhibit/auction was borne of a conversation Riley had with Bloom when she became director and did a listening tour around the city in the fall of 2019 before the pandemic. Bloom and other young artists told her how difficult it was to get established galleries to exhibit their work. She vowed to host quarterly exhibits until they had a place of their own. This fall’s auction at St. Regis is the first.

“Luis represents the best of entrepreneurs,” Riley said. “He conceived of an auction and worked side-by-side with me to plan and organize it and solicit and curate the art. I am so proud of him.”

Bloom is a first-generation Haitian-American whose journey as an artist began at age 12 with pencil drawings. He focused primarily on people’s faces and expressions while watching his older brother, Timothy. Bloom mastered facial expressions while learning graphic design his senior year at Woodhaven High School in Woodhaven, Mi. While attending a basic drawing class at Macomb Community College, he discovered the process of breaking down images to their “wire form.” He began embracing an abstract approach to his art. By his sophomore year, he asked his close friend, Khristyn Richardson, to teach him to paint. Soon, some of her fellow students at the College for Creative Studies encouraged him to sell his work. So Bloom began knocking on neighbors’ doors, off West Seven Mile Road in Detroit. In 2015, he and Khristyn created a collaborative business partnership that, thanks to a robust online presence, led to them selling pieces to buyers in Scotland, Great Britain, and Haiti. The pair also have accepted commissions from the Detroit Pistons, DTE, Crown Royal, and other companies. Together, the duo looks to inspire the world with their colorful, abstract, pop art.

The Young, Gifted, and Woke auction, which will follow all pandemic guidelines for a limited audience and social distancing, requires registration through Eventbrite. For tickets or information, contact Rochelle Riley at [email protected]. Space is limited. Admission is on a first-come, first-served basis. Collectors encouraged. 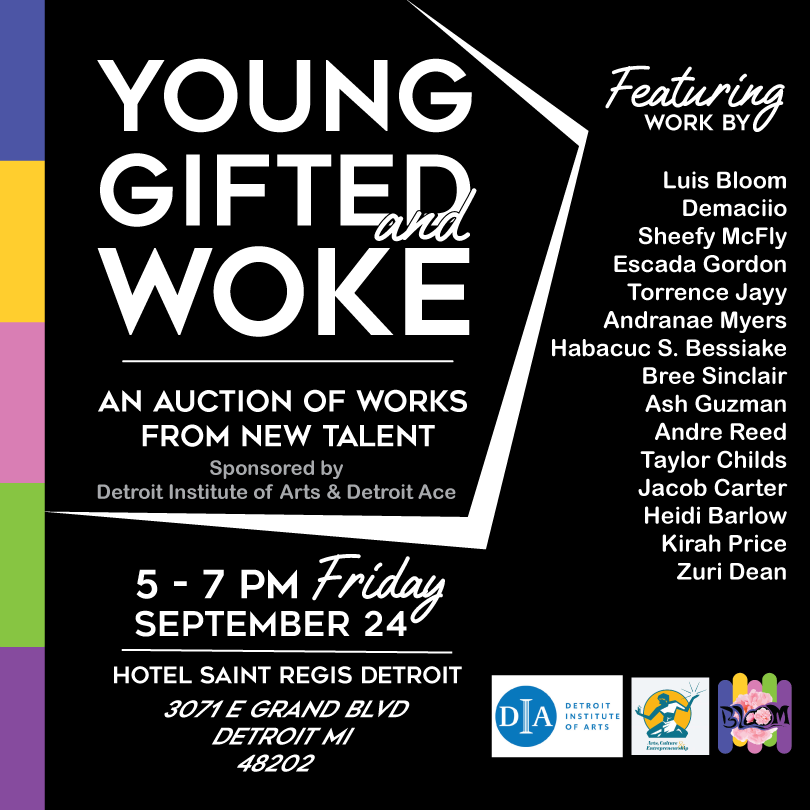