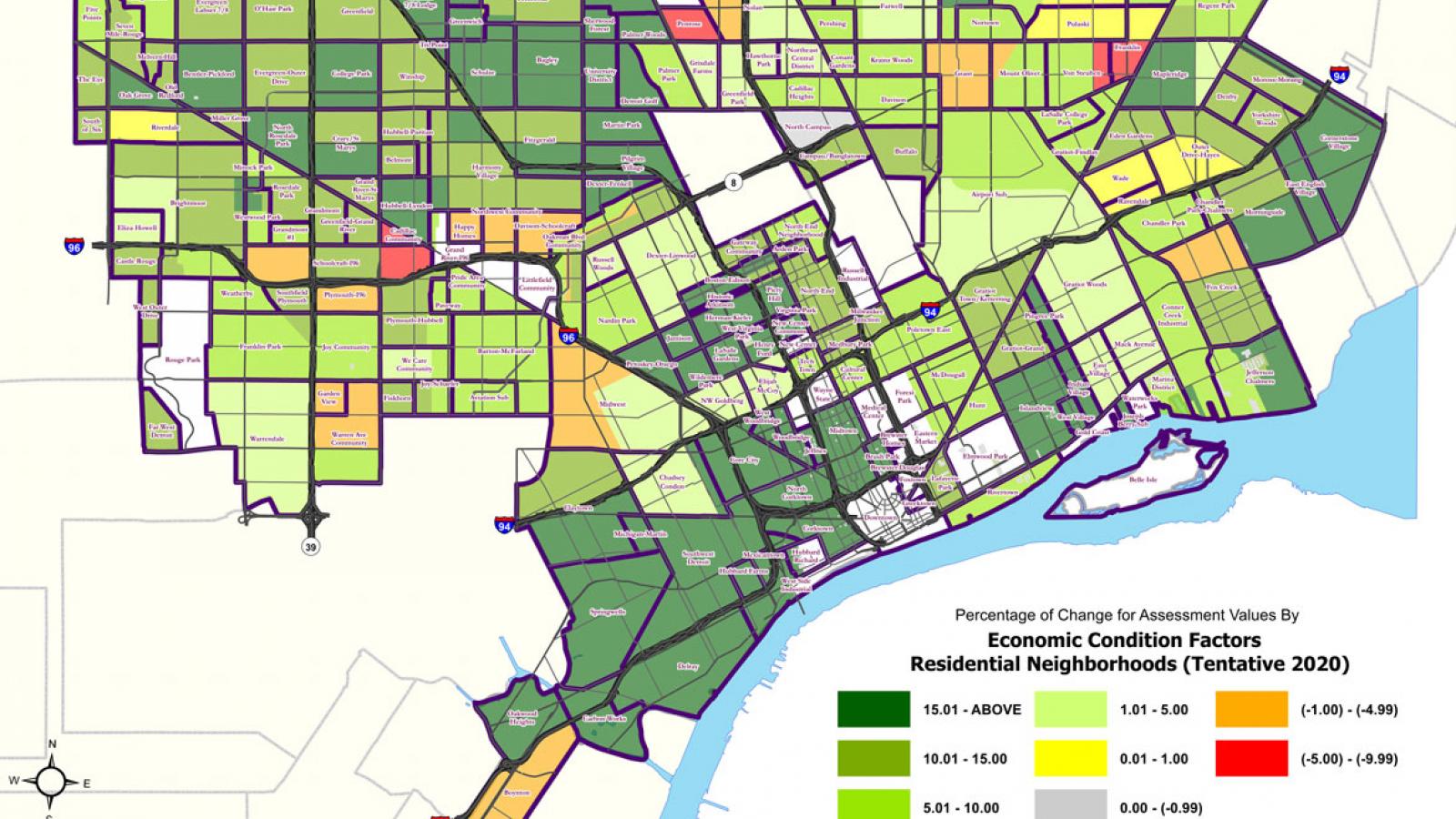 Detroit, Michigan – Residential property values in Detroit are projected to surge by an average of 20% in 2020 tax assessments, the largest one-year rise in the city since 1997, Mayor Mike Duggan said today. The city’s strong numbers, which are based on two years of actual market sales, mark its third consecutive year of growth and second consecutive year with the largest increase in value of any city in Wayne County. Last year, Mayor Duggan announced an average increase of 13% in residential property values.

However, while property values in the city have increased sharply, homeowners are protected against large property tax increases. Under state law, the annual increase in property taxes is capped this year at 2% as long as ownership has not changed. When a home sells, the cap is lifted and the taxable amount adjusts to the State Equalized Value the year following the transfer.

“This is great news for Detroit homeowners, particularly those who held on to their properties and stayed in the city,” said Mayor Duggan. “Homes values in nearly every neighborhood are rising and helping to build new wealth, without significant tax increases. This shows as clearly as anything that the city’s revitalization has reached nearly every corner of our city.”

Later this week, the city will mail out more than 400,000 notices of proposed assessment changes to property owners. This is not a bill and under State law, property owners have the right to appeal the proposed changes. The proposed 2020 Assessments are tentative until the completion of the local review period in March and any possible changes from the Wayne County Equalization in April.

When Mayor Duggan took office in 2014, the city’s residential values were in a tailspin and had lost an estimated $3 billion in value since 2010. To help struggling homeowners, Duggan announced a 29% cut in residential assessments in his first month in office, followed by further cuts in 2015 and a citywide reevaluation. In 2016, some areas of the city began to see modest growth in residential property values, however those areas were confined to downtown, midtown and a few strong neighborhoods.

Improved city services, such as police, fire, EMS, transit, parks & recreation and more, along with the nearly 30,000 vacant homes that either have been demolished or renovated has created the climate for stronger neighborhoods, Mayor Duggan said.

“We have had a clear strategy from the beginning to start with improved city services, blight removal and quality of life issues to help stabilize neighborhoods. While we still have a lot of work to do, the strategy is working,” the Mayor said.

“This strong property value growth provides greater stability not only in our neighborhoods but also for city’s economy and revenues,” said Chief Financial Officer, David Massaron.

To determine this year’s assessment, the city examined two years of actual market sales. This year that included 62,355 transfers of all types, including market sales, quite claim deeds, and land contracts. The Office of the Assessor reviews aerial and street level imagery of properties to determine valuation.

Here is a breakdown of this year’s assessed residential value changes across the city’s 194 neighborhoods:

Notices will be mailed beginning this week, January 21, 2020 to the city’s 408,934 residential, commercial, industrial, and personal property owners, advising them of their proposed assessments for 2020. These are not tax bills. Actual bills will be mailed out at the end of June and November.

All property owners have the right under state law to appeal their proposed assessment. Additionally, the City of Detroit offers property owners an informal opportunity to appeal their property value. Residents will have three weeks to appeal all assessments, an extended deadline of the normal two-week timeframe. The Assessors Review appeal process will take place between February 1st and February 22nd in Room 804 of the Coleman A. Young Municipal Center, 2 Woodward Ave., Detroit, MI, during this timeframe the office will remain open on Saturdays. The March Board of Review, the second step in the review process, begins March 3rd and ends March 26th in Room 1208 of the Coleman A. Young Municipal Center. Anyone with questions or wishing to challenge their assessments can email the Assessor’s office at [email protected].

Residents who apply before March 21 and are approved by the city’s Board of Review, can receive their tax exemption before their summer tax bills are prepared. Summer tax bills are mailed out in July and at least half payments are due August 15th. Taxes not paid Before March 1st of the following year are delinquent and sent to the County Treasurer for collection.

Applications are available online at detroitmi.gov. Applications also may be requested to be sent by mail, by phone 313-224-3035 or by sending an email to [email protected].