New US Labor stats: More Detroiters employed in July than in any other month in the past decade 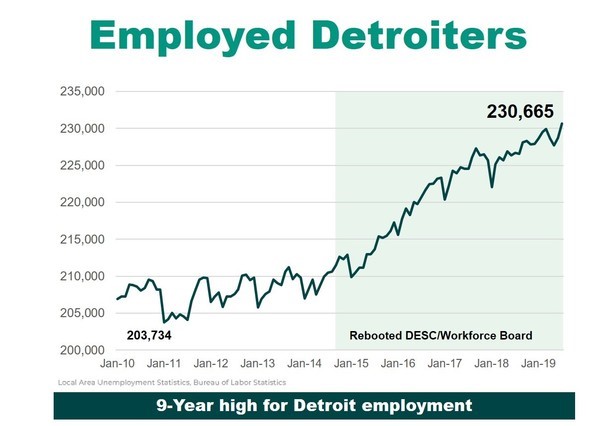 DETROIT, Michigan – The number of employed Detroiters has surged past the 230,000 mark for the first time in a decade, according to July employment statistics just released by the US Bureau of Labor Statistics (BLS). In July – the most recent month for which numbers available – 230,655 Detroiters were employed.

The last time more Detroiters were employed was December 2009 at the onset of the Great Recession, when tens of thousands of jobs disappeared. After stagnating from 2010-2014 in the range of 205,000 to 210,000, the number of employed Detroiters has risen sharply each year since 2015. That’s when Mayor Mike Duggan retooled the city’s approach to training and employment to focus on in-demand job sectors, reorganized the Workforce Development Board and established the Detroit At Work initiative.

“Detroiters have more opportunity today for employment and they are taking advantage of it,” said Mayor Duggan. “We have nearly 13,000 Detroiters who have gone through a Detroit At Work process to be on the priority hiring list for the new FCA assembly plant and other major employers. We are seeing sustained growth in Detroiter employment, but still have a way to go.” 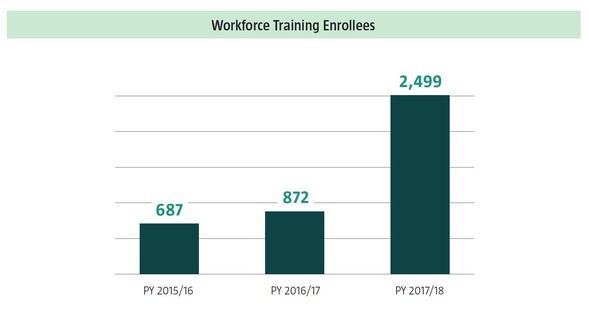 The BLS numbers also show that 7,500 Detroiters reentered the workforce or are actively seeking work, a sign of optimism that jobs and opportunity are available. That represents a 3% increase from the previous month. With 260,000 Detroiters now either employed or seeking work, the city is seeing its highest Labor Force Participation rate since 2013.

“The Mayor’s Workforce Development Board, backed by Detroit at Work and DESC, is steadily building out the workforce infrastructure we need for Detroiters,” said Executive Director of Workforce Development, Nicole Sherard-Freeman. “While we have a long way to go, we are encouraged by the number employed, and the number of Detroiters who have reconnected to the labor market because they see opportunity.”

In 2017-18, more than 2,000 individuals enrolled in training programs through Detroit at Work, compared to fewer than 900 a year ago. Today, residents can access more than 6,000 jobs, as well as an array of free training programs through www.detroitatwork.com to prepare residents for jobs in in-demand fields such as construction skilled trades, health care, hospitality, culinary arts and information technology.

In addition to launching Detroit at Work, the city has been working with major employers, educators, unions, state lawmakers and others to increase access to meaningful work and job training. That has included eliminating driver responsibility fees that have prevented 76,000 Detroit residents from being licensed to drive and growing prison-based training programs that prepare returning citizens for jobs after their release.