DETROIT, Michigan – The City of Detroit has the key acquisitions of nearly 215 acres of land needed for the construction of a new $1.6 billion Fiat Chrysler Automobiles (FCA) assembly plant on the city’s east side, Mayor Mike Duggan announced today.  In addition, FCA plans to invest $900 million to retool and modernize its Jefferson North Assembly Plant (JNAP), for a total investment of $2.5 billion and the creation of nearly 5,000 new good-paying jobs in the city. 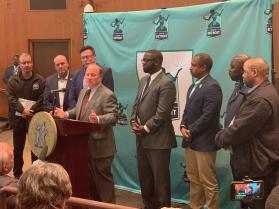 The City already completed deals with several major property owners in the footprint of the project, including DTE, the Great Lakes Water Authority and Hantz Farms.  The key piece was a deal reached Thursday between the City and Crown Enterprises to secure the final 82 acres of land required for the project.  The City also reached agreements with the owners of several smaller parcels located within the project’s footprint including Soave Enterprises, Mayor Duggan said.

The City also has requested $57 million in grants and loans from the State to support site preparation.

“We appreciate the tireless efforts of Mayor Duggan and his administration and the Neighborhood Advisory Council to reach this important milestone,” said Mark Stewart, Chief Operating Officer, North America, FCA. “We look forward to working with City Council, State of Michigan and the Michigan Strategic Fund Board as they consider the merits of this deal, which will create thousands of good-paying, union jobs and expand our manufacturing footprint in the state and city we call home."

The project will now go to City Council for approval, as will the $35.2 million community benefits agreement, approved last week by the Neighborhood Advisory Council.  The land deals also must be approved by the Detroit Brownfield Redevelopment Authority (DBRA), which will transfer the properties to FCA.

If the elements are all approved by City Council and DBRA by mid-May, then, per its agreement with the City, FCA would proceed with its plans to convert the two plants that comprise the Mack Avenue Engine Complex into the future assembly site for the next-generation Jeep® Grand Cherokee, as well as an all-new three-row full-size Jeep SUV and plug-in hybrid (PHEV) models. FCA will also retool and modernize JNAP for continued production of the Dodge Durango and next-generation Jeep Grand Cherokee.

Mayor Duggan thanked the many partners who came together over the past 60 days to help bring investment and jobs to the city.

“This simply would not have been possible without the faith that FCA’s CEO Mike Manley placed in the people of Detroit, the tremendous support of the State, and the cooperation of the property owners who understood the rare opportunity this represents for our city and worked with us throughout this complicated process,” Duggan said.

The Mayor also gave a special acknowledgement to the volunteer members of the Neighborhood Advisory Council.

“I can’t say enough about the neighbors who got engaged in the process, faithfully attended meetings and especially those who served as NAC members.  They represented their neighbors extraordinarily well and negotiated a comprehensive community benefits package that the entire city should be proud of,” Duggan said.

The CBA also includes provisions for the city to demolish 300 vacant homes in the impact area over the next three years, $800,000 for community-selected neighborhood revitalization projects, and an ivy-covered wall and landscaping to serve as a buffer between the plant and the community.

FCA and the City of Detroit identified opportunities to protect the City’s investment in the project, by ensuring the City will recoup its direct investment through new tax revenue as a result of FCA’s investment.